The world’s fastest growing mobile company has long had a chip on its shoulder when it comes to Apple and Samsung. For too long, the company has had to go out of its way to remind the world that it’s capable of being every bit as innovative as those better established brands, a concept very much at the heart of the Mate X.

The device lives right at the cross section of the year’s biggest forward looking trends — foldables and 5G, and unlike some of the concepts we’ve seen to date, the product does so with panache.

It is, of course, a bit of a wild west when it comes to form factors for the burgeoning foldable space. In a quick, behind the scenes briefing ahead of today’s press conference at MWC, we were given the opportunity to see the handset in action. It was, admittedly, a little more rushed than we’d like, involving no actual hands on time with the product — it was more of a stand behind this rope and snap off a couple of photos situation.

No touching, no followup questions. The company promised to shed more light on the product today, as Richard You takes the stage, but for now, it appears to be the kind of cautious presentation one gives involving a device that isn’t quite ready to be put through its paces. Even so, it’s a heck of a lot closer and with much better lighting than we got the first time Samsung showed off its own entry. 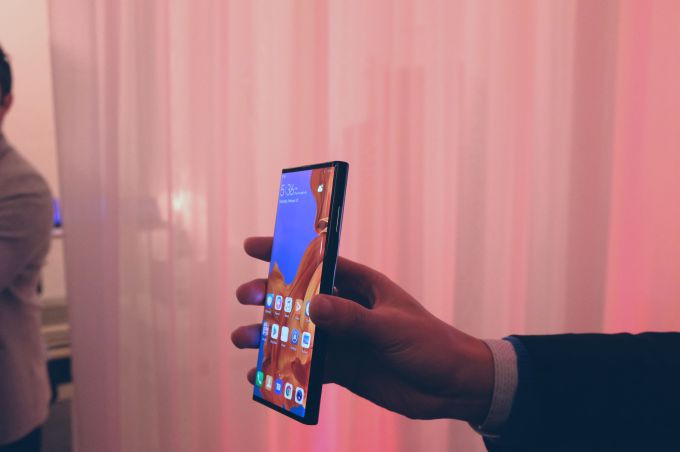 And from these early glimpses, I’m mostly impressed with what the Chinese manufacturer was able to do here. Huawei’s brought some clever touches to the product category, and designed what looks to be a pretty slick devices from most angles.

The device is thin, as far as tablets go, at 5.4 mm, unfolded. Closed, it’s nearly double that, at 11 mm. Not thin, exactly, but still a heck of a lot easier to slip into your pants pockets than the 17mm Galaxy Fold.

More impressive is what the company’s been able to do with its displays. The screen is very much the thing on these products, and yet the Fold’s outside screen only measures 4.6 inches. The Mate X, meanwhile, sports a pair of outward-facing displays, the larger of which measures 6.6 inches at 2480 x 1148 pixels, with a 19:5 aspect ration.

The flip side is 6.38 inches, allowing for space for the camera bar — a chin that folds over to meet the display. The system features a Leica lens and the design is such that photo subjects can see themselves on the outward-facing display as a shot is taken. On the device’s side is a combo fingerprint reader/power button.

Unfolded using the proprietary “Falcon Wing” hinge (three years in the making, according to mobile CEO Richard Yu), the inside screen is a full eight inches. That’s certainly enough room to have a pair of apps open, side by side. While we didn’t get closer than a few feet away, the vantage point was enough to spot a visible crease in the middle of the phone, detectable when it caught the overhead lights.

The other key part here is, naturally, the 5G. Huawei, of course, manufacturers its own 5G network gear, which means that, unlike most of the competition, it’s been able to speed test. The company calls the Mate X “the world’s fastest 5G phone” — words that admittedly don’t mean a heck of a lot, at the moment. That said, it’s promising download speeds of “up to 4.6 Gbps, which should translate to a 1GB movie download in three seconds.

Inside are a pair of batteries that add up to 4,500mAh – you’re going to need something beefy inside to deal with all of those screens and 5G, which is a notable battery drainer. The company’s Kirin 980 processor is also on board for the device.

A false start for foldables in 2019