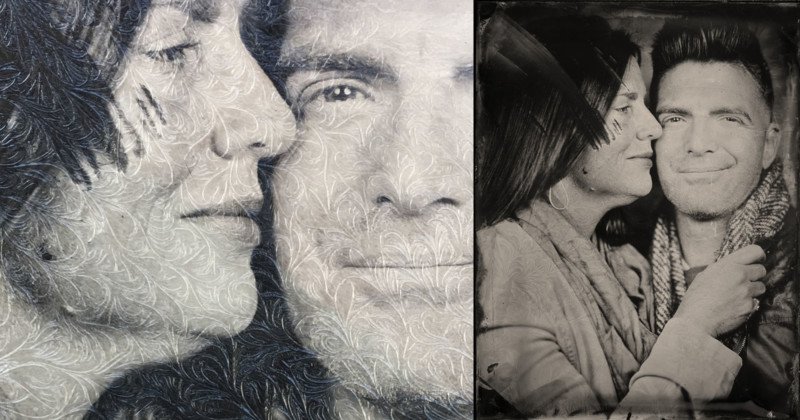 New York photographer Justin Borucki has been documenting his city with a pop-up tintype studio out of the back of his car. While shooting a portrait for a client recently, Borucki unexpectedly captured a beautiful leaf-like pattern across the photo due to the frigid wind chill causing ice crystals to form.

Borucki often uses a flame to dry plates after washing them, but on this particular day, ice beat fire to the punch.

“On this shoot at my NYC pop-up studio, the temperature was about 35 degrees F but with the wind chill at times it was apparently below freezing,” the photographer writes in an article at EMULSIVE. “The water on the surface of this plate froze before I could get it over the flame, forming the most beautiful patterns on the surface.”

Borucki quickly rushed the plate back to the water bath to defrost it, fearing that the ice would damage the collodion. But luckily for him, the photo survived just fine and emerged with the unusual pattern across the shot.

The photographer tells PetaPixel that this photo is just one example of the strange and unusual things that can happen out in the field while doing wet plate collodion photography.

“I have certainly have never seen the surface of the collodion effected like this in the past,” Borucki writes. “Perhaps I’ll never see it again.”

Olympus Made This Video to Celebrate Its 100th Anniversary