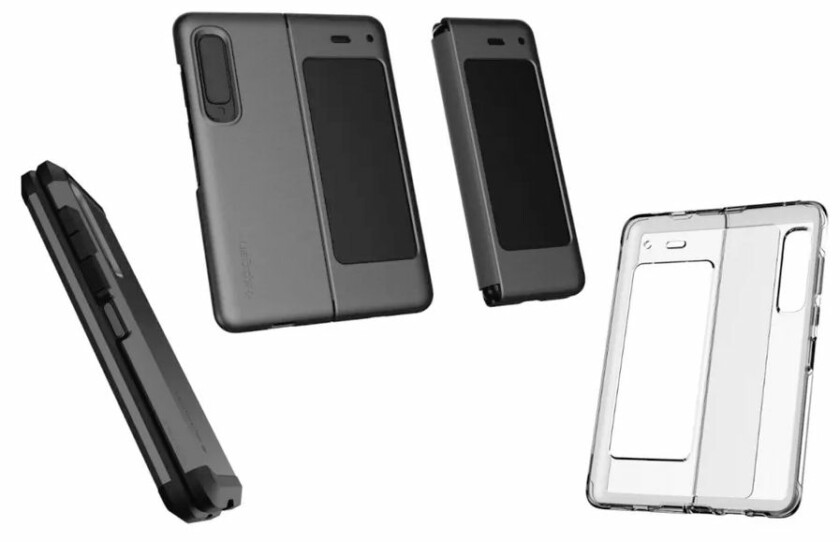 The Verge/Spigen
Ever since we knew that foldable phones with flexible displays would go on sale in 2019, a big question we have had is, “How would foldable phone cases be designed and made?” Now we know that at least one major case maker, Spigen, is developing Samsung Galaxy Fold cases that will hopefully work with the device’s unique design.

The Verge reports that Spigen started developing as many as 20 prototypes for foldable phone cases even before the Galaxy Fold was announced. When the Galaxy Fold’s exact measurements were finally revealed at last week’s Unpacked event, Spigen created a model of the phone so it could start testing case designs.

Spigen plans to release three models for its Galaxy Fold cases: Thin Fit, Ultra Hybrid, and the company’s famous Tough Armor model. The accessories will be made out of thermoplastic polyurethane (TPU) and polycarbonate (PC).

So how is Spigen dealing with the flexible display hinge in the middle of the Galaxy Fold? The article quotes a Spigen rep as saying that for the Tough Armor case, it created a “special constructive structure for bending purposes.” The company doesn’t want to go into too much detail for competitive reasons, so we will have to wait and see if Spigen’s solution works.

Huawei Mate X vs Samsung Galaxy Fold: Who did the foldable phone better?

MWC 2019 has kicked off and it’s looking like the most exciting iteration in years, in large part due to the presence of foldable phones. The two leading devices are undoubtedly the Samsung Galaxy Fold …

The company is still testing its Galaxy Fold cases but plans to release them before the phone goes on sale on April 26.

The Verge’s article adds that another phone accessory company, Zagg, is also working on foldable case designs, but development has slowed as it doesn’t have access to the Galaxy Fold.

Additionally, there’s no word on if Samsung itself will launch any cases for the device. It will be very interesting to see how top accessory makers deal with the multifaceted handset.

Apple Music now has more US subscribers than Spotify, per WSJ