If you’re like me and cringe at the thought of buying a smartphone for $1,000, keep reading.

The Galaxy S10e will probably appeal to more people. It’s less expensive, starting at $749, and has the same bleeding-edge specs as its bigger brothers. It’s like the iPhone XR of the Android world.

I’ve been using the Galaxy S10e for about three days, and I’m starting to think this is the Galaxy phone most people should buy.

Editor’s note: Our Samsung Galaxy S10e review unit has been tested on T-Mobile’s network in the U.S. for the past three days. The device is running Samsung One UI version 1.1 on Android 9 Pie with build number PPR1.180610.011.G970U1UEU1ASAU on the February 1, 2019 Android security patch. While this is still technically pre-release software, it is a near-final build.

The Samsung Galaxy S10e review unit was provided to Android Authority by Samsung. 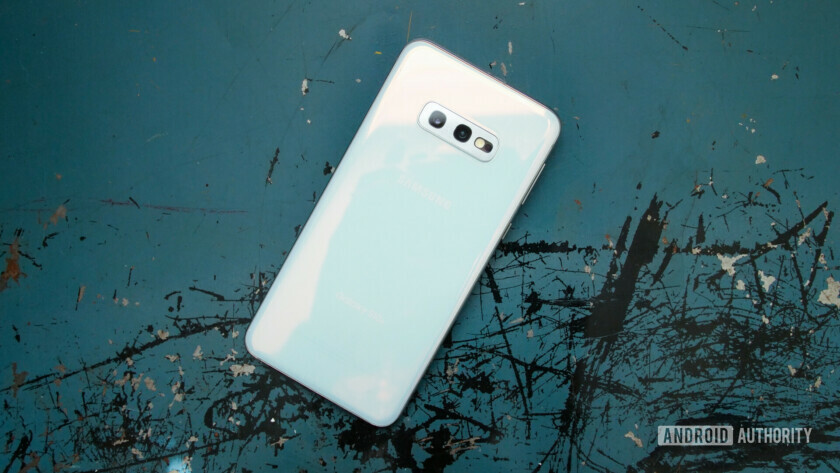 The whole Galaxy S10 line is pretty and well built, but the top two S10 devices are just so big. The S10e delivers the same great build quality in a more compact form factor. This isn’t necessarily a small phone — it has a 5.8-inch display, after all. However, the very minimal bezels surrounding the display kind of make it feel like you’re holding all-screen in your hands.

Speaking of that display, oh boy. I love it. Samsung makes the best AMOLED panels around, and while this one isn’t as pixel dense as other Samsung phones (this one is Full HD+ with a pixel density of 435ppi), the average user probably won’t be able to see individual pixels.

I don’t really mind the punch hole camera on the top-right of the display. I prefer it to a notch, and I don’t even think about it most of the time. If you were concerned about it being too distracting, don’t be! If you do get distracted by it, try one of these wallpapers.

You can check out the full list of Samsung Galaxy S10e specs, and see how it compares to the other S10 devices, right here. Our model runs on Qualcomm’s Snapdragon 855 platform, while the global model is powered by the Samsung Exynos 9820. Our own Gary Sims compared the two models on his YouTube channel, which you should definitely check out. We’re also using the variant with 6GB of RAM and 128GB of storage, though there is a model with 8GB of RAM and 256GB of storage if you need more.

Unlike the S10 and S10 Plus, the S10e doesn’t have an ultrasonic fingerprint sensor embedded in the screen. Instead, the side-mounted power button doubles as a fingerprint sensor. Overall this is a good thing (David says the in-display sensor isn’t all that great), though the S10e’s sensor has its quirks.

Starting with the positives, side-mounted fingerprint sensors are so underrated. Especially on a phone this small, your thumb naturally rests where the sensor is located, making it quick and easy to unlock your phone from sleep. Even better, you can swipe down on the fingerprint sensor to pull down the notification shade.

Before you upgrade to the Galaxy S10 the first thing you should consider doing is selling your Galaxy S9. There are two ways of doing this. The first one is super fast and easy, but it …

I would’ve liked the fingerprint sensor a few millimeters lower, though. It’s just high enough to where I need to pick up my phone a bit differently than normal to reach it. However, this isn’t a deal breaker by any means.

I’ve found myself taking a ton of accidental screenshots when I turn the volume down on the S10e, as it’s very easy to also press the power button. This is a slight annoyance, but an annoyance nonetheless.

The fingerprint sensor is super quick to unlock the phone — after you figure out how to consistently trigger it. Your finger has to cover the entire sensor to work. Due to the location and long shape of the sensor, this can result in lots of failed attempts to unlock the phone.

One UI is awesome

I’ll keep this section short and sweet, because we’ve talked about Samsung’s One UI ad nauseam. The Galaxy S10e is running the latest version of One UI, version 1.1, based on Android 9 Pie.

It’s so good, I almost prefer it over the Pixel launcher on my Pixel 3. Almost.

One UI was introduced partially because our phones are big now. Samsung’s new interface brings most of the actionable elements down to the bottom half of the screen, making it easier to reach things without moving your hands to the top of the phone. The Galaxy S10e isn’t a big phone, which means reaching your quick settings and recent messages with one hand is easy.

Samsung and LG stand as two monolithic companies in their homeland of South Korea. Both companies have revealed their flagship phones for the first half of 2019, first Samsung with the Galaxy S10 followed by …

Aesthetically, One UI looks great. It merges the best of vanilla Android Pie with Samsung’s new design language. As a result, Samsung’s stock apps and various settings menus are refined and pleasing to use. Also, the system-wide night mode is wonderful.

I still have a few qualms with the launcher. The app drawer still scrolls horizontally, unlike just about every other smartphone’s app drawer. The app folders on the Samsung launcher are annoying too — apps at the top of the folders are hard to reach, and frankly the design of the folders doesn’t seem like it’s been touched in years.

Aside from those few nitpicks, One UI on the Galaxy S10e has been a joy to use.

The Galaxy S10e doesn’t have as many cameras as the other S10s, but the quality is the same. Both rear-facing cameras have proven to take good photos in most lighting conditions, but I don’t think Samsung is quite at Pixel 3 level of photography quite yet.

I still need to dig into more of the S10e’s camera features, but I wanted to at least share some early camera samples with you so far. Also, note that these are all resized to 1080p. Feel free to check out the full-sized camera samples here.

The front-facing camera is just okay. Selfies are a bit oversaturated for my liking and don’t look very natural (my face isn’t that red in real life). And despite beauty mode being completely turned off, Samsung’s post processing still attempts to smooth my face. Check out a sample below compared to the Pixel 3.

This is by no means a full Galaxy S10e review. I still need to dig deeper into the cameras and battery life, and see if performance holds up in a week’s time. Stay tuned for our full review next week!

Check it out on Samsung.com

In the meantime, let me know what you think of the S10e. Anything else you want to know about it? Sound off in the comments.

Nepal bans PUBG over concerns of addiction and aggression

The Galaxy S10 has an Instagram mode and Adobe Premiere Rush