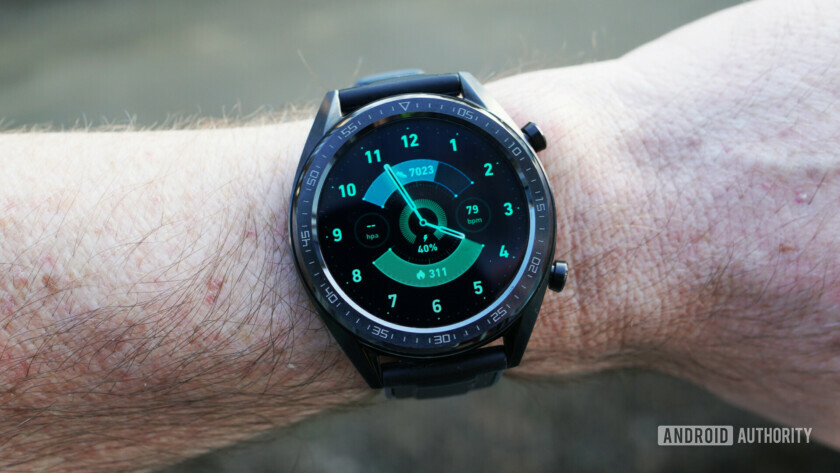 In a press conference in New Delhi, Huawei launched its new smartwatch, the Huawei Watch GT, in India.

The Huawei Watch GT looks like a regular watch, lasts up to two weeks on a single charge, and slims down the feature-set to only the most basic functions – health and fitness tracking and simple inbound notifications.

The Huawei Watch GT sports a pretty standard industrial design with a stainless steel body which is a tad chunky and not for the slim-wristed. It’s roughly the same size as the Samsung Galaxy Watch, just a little bit thinner at 10.6mm (vs 12.9mm) and noticeably lighter at 46 grams (vs 63 grams).

The Huawei Watch GT sports a bright and colorful 1.39-inch AMOLED display with 454 x 454-pixel resolution. Like the Galaxy Watch, the Watch GT has a 46mm watch face surrounded by a ceramic bezel.

Presumably, to keep the weight down, Huawei decided to use plastic on the rear of the Huawei Watch GT, which is where you’ll find the heart rate monitor and two pogo pins for the small circular charging dock that uses a USB-C connection. The Huawei Watch GT is water-resistant to 5ATM so it’s fine to take in the shower or pool.

The Huawei Watch GT uses GPS, GLONASS, and GALILEO for precise location tracking. If you’ve ever used your smartphone to track an activity you’ll know just how bad it is for your battery life. If you have GPS on constantly, you’ll get around a day’s usage out of the Watch GT.

However, if you use it sparingly, Huawei promises two weeks of battery life, which is incredible. Use the watch only for messages and fielding calls and Huawei says you can get a whole month’s battery life out of a single charge, but then it will also be pointless to buy one in the first place unless you’re just sporting one to keep up with the trend.

Instead of Google’s Android Wear, Huawei puts its custom Lite OS on the Watch GT. It’s a lean operating system and doesn’t allow you to install apps. Lite OS is a walled garden, with only the “apps” Huawei has preloaded available on the watch.

The primary function of the Huawei Watch GT is health and fitness tracking but it also includes some pretty sophisticated sleep tracking tech from Harvard Medical School. This watch is very clearly targeted at athletes, outdoor explorers, and fitness fanatics, with a veritable decathlon of preset fitness tracking options accessible by pressing the bottom of the two buttons.

While you can get basic activity info and records on the Huawei Watch GT, to make full use of its capabilities (including sleep tracking) you’ll need the Huawei Health app on your phone. You can enable or disable Huawei Trusleep and continuous heart-rate monitoring through the Health app.

The app is also where you update the Watch GT’s software and control activity reminders for when you’ve been sitting for over an hour.

With the Huawei Watch GT, the company aims to solve two of the usual complaints against smartwatches – one, that they try to do too much and second, that the battery life sucks. With varied degrees of success, it manages to do so. Here’s our complete review of the Huawei Watch GT.

The Huawei Watch GT is priced at 15,990 rupees ($229) for the Sports Edition and 16,990 rupees ($243) for the Classic Edition. It’s clearly cheaper than most smartwatches and competes with the likes of Fitbits.

What do you think of the Huawei Watch GT, and what do you want out of a “smart” watch – do you want it to do everything, or just do what you need it to? Let us know in the comments.

How to record your screen on any device