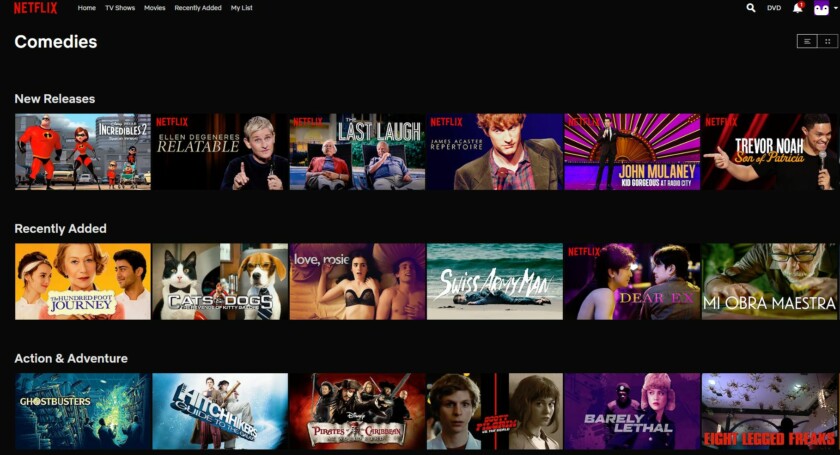 There are lots of funny movies on Netflix, from rom-coms to dark satires, to even superhero comedies. However, it can be very hard to find the funniest movies on the premiere streaming video service using just Netflix’s search algorithm. Fortunately, we can help out by giving our picks for the current best funny movies on Netflix. As you will see, this list of awesome comedy films includes some true classics, as well as more modern releases.

Netflix is one of the best premium streaming services, with thousands of movies to choose from. That list includes some of the best action movies ever made, with lots of thrills, spills and high-adrenaline sequences. However, …

A quick clarification on this list. We have concentrated on funny films on Netflix, and not all of the many comedy specials that are available on the service. We are also not diving into the many funny TV shows that are also available to binge on Netflix. We do consider original comedy films that have made their debut on Netflix, but as of right now, none of them made the top 10.

Editor’s note: This list will be updated as new funny movies leave and other comedy movies make their debut on Netflix.

Monty Python and the Holy Grail

After gathering a cult following for their work on the BBC comedy show Monty Python’s Flying Circus and a movie based on it, this group of sketch comedians blew audiences away with their first original film. 1975’s Monty Python and the Holy Grail remains one of funniest movies ever made and certainly deserves to be on our 10 best funny movies on Netflix. If you have never watched it, prepare to start quoting a ton of its lines. This may be the best movie ever made about the myth of King Arthur as well, and that’s saying something.

You can also catch up on the group’s earlier work on Netflix, which is streaming the entire run of the Monty Python’s Flying Circus TV series. Also make sure to watch another great film, Monty Python’s Life of Brian.

If you like your funny movies on Netflix to be on the darker side, then The Addams Family is a perfect choice to stream and watch. The Addams Family was originally created by cartoonist Charles Addams, and later adapted into the classic 1960s TV sitcom. This 1991 film adaptation is laugh-out-loud funny as we encounter the members of this gothic and dark family. The film is lead by some terrific performances by the late Raúl Juliá as Gomez Addams, Anjelica Huston as his wife Morticia, Christina Ricci as the ultra-goth daughter Wednesday, and by Christopher Lloyd, who actually plays two roles (sort of): Uncle Fester and the person who is impersonating him in the movie (or so we think at first).

It was the first film directed by Barry Sonnenfeld, who went on to direct hits like Men in Black, Get Shorty, and this film’s sequel, Addams Family Values. It contains his trademark artistic style of over-the-top comedy that’s just perfect for this film.

The Marvel Cinematic Universe films have always had a healthy dose of comedy, but none of them have the amount of humor than this 2017 release. Directed by Taika Waititi, this film does have its serious moments, but it definitely takes the crown as the funniest movie in the MCU series, and certainly one of the top funny movies on Netflix. Thor, as played by Chris Hemsworth, has to deal with his newly discovered sister Hela, who wants to destroy Asgard and everyone in it. He also has to escape from a planet where gladiatorial contests are held between aliens, and one of them happens to be the Hulk. This makes this film a bit of a buddy comedy, and Tom Hiddleston, of course, returns with all of his great one-liners as Thor’s trickster brother Loki. Then there’s Jeff Goldblum, who hams it up, in a good way, in his performance as the Grandmaster, the leader of this planet. Thor: Ragnarok is simply a good time all around, and a nice reprieve before we get serious again for Avengers: Infinity War (also on Netflix).

If you are an action movie fan on Netflix, but also want some comedy, you have to check out this 2007 British film from director Edgar Wright. Simon Pegg co-wrote the film and stars as London Police Sergeant Nicholas Angel, who is so good at his job, his superiors want to get rid of him because he makes them look bad. As a “reward” for his hard work, Angel is shipped out of the big city and to the small country town of Sandford. Here he quickly discovers that there’s a very dark secret in this community that only he and his partner Danny, played by Nick Frost, can discover and stop. Along the way they meet some interesting characters, including former James Bond Timothy Dalton, who plays a grocery store manager who wants to do more than be “a slasher . . . of prices”.

Hot Fuzz is the rare action comedy that can hold its own with the best straight action movies, while also being a love song to the entire genre. It’s on both our 10 best action movies and our 10 best funny movies on Netflix for a reason.

Scott Pilgrim vs. The World

Based on the Scott Pilgrim comic book series, this 2010 movie adaptation from Hot Fuzz writer-director Edgar Wright was a major box office bomb when it was released in theaters. Since then, the movie has finally found its audience that gets its mix of young adult romance with video game action. Michael Cera plays the title role of Scott Pilgrim, a bassist who falls for the pink-haired Ramona Flowers, played by Mary Elizabeth Winstead. One problem for Pilgrim: in order to keep dating Flowers, he must battle and defeat all seven of her ex-boyfriends. All of these confrontations are inspired by retro video games, and Wright’s use of gaming graphics and icons in Pilgrim’s fights with the exes is one of the coolest, and funniest, things you will likely see in movies in a long time.

If you like comedies with a more mature and adult bent, then Bull Durham is for you. This 1988 film is also one of the best sports movies ever made. Kevin Costner plays “Crash” Davis, a long-time minor league catcher who is brought into the Durham Bulls baseball team to help mentor pitcher “Nuke” LaLoosh, played by Tim Robbins, so he can go to “the show”, or the major leagues. Nuke is also taught some other “things” from the Bulls’ major league fan Annie Savoy, played perfectly by Susan Sarandon. The triangle between these three characters, all set around a small baseball team, wouldn’t seem like a comedy at first, but it is indeed one of the funniest movies on Netflix.

Here’s another adult comedy that helped to launch the careers of both Jon Favreau and Vince Vaughn. The 1996 film, which was also written by Favreau, centers on actors who socialize and party hard in both Hollywood and Las Vegas. It has a bit of a retro feel to it, as the characters look and act a bit like they are part of the 1940’s party and lounge scene, with swing music and heavy drinking. Vaughn’s character Trent helped to make the word “Money” and the phrase “Vegas, baby” popular among the cool crowd after Swingers became a cult hit.

This is the movie that got so controversial, its studio Sony tried to pull it from theaters in 2014. The reason? The company’s computers were hacked into just before the film was to be released, and the group behind it threatened violence if Sony went ahead with its launch plans. Sony ended up releasing The Interview in a limited number of theaters, and also online for rent and purchase, in December 2014, and it was released on Netflix just a month later in January 2015.

All of that controversy centered around a very funny, if very dark, satire from directors and co-writers Seth Rogen and Evan Goldberg. Two entertainment journalists get a chance to go to North Korea to interview its leader Kim Jong-un, but then they get sucked into a CIA plot to assassinate the leader. The Interview was already generating a ton of chatter due to its wild storyline, but the Sony hack and the terrorist threats couldn’t mask the fact that it was, and still is, a very funny movie.

Ah, the joy of going to college; the learning, the sports, and of course the raging fraternity house parties. Director John Landis’s classic 1978 comedy took no prisoners. A group of students at Faber College that pledged Delta Tau Chi take it upon themselves to attack the stuffy Dean Wormer and the pretentious students at the Omega Theta Pi chapter any way they can. This still is one of the best funny movies on Netflix, and it helped to turn John Belushi from a TV sketch comedy actor into a major movie star. Just beware of the double secret probation and make sure to make your run at the Food King.

Our last movie on our best funny movies on Netflix list seems more relevant today than it did when it was released in 1998. Jim Carrey gives the best performance of his career as Truman Burbank, a man who has lived his whole life in a literal bubble. He is watched 24/7 around the world on TV because, unknown to him, he is in a fake town, and all of its “residents” are actors in The Truman Show, even his wife. The film, in its own exaggerated way, predicted the rise of reality TV and now, with tons of internet celebrities live streaming nearly their entire lives on a regular basis, this show doesn’t seem nearly as fanciful as it once did. Having said that, the movie is still very funny and also moving at the same time, particularly as Truman finally begins to figure out that something is wrong with his life.

There are tons of great comedy films currently streaming on Netflix that just missed the cut. Here’s a look at just some of these still funny movies on Netflix:

These are our picks for the best funny movies on Netflix, as of right now. What do you think of our list, and which comedy movies do you think should be removed and which ones should be in our top 10? Let us know in the comments!