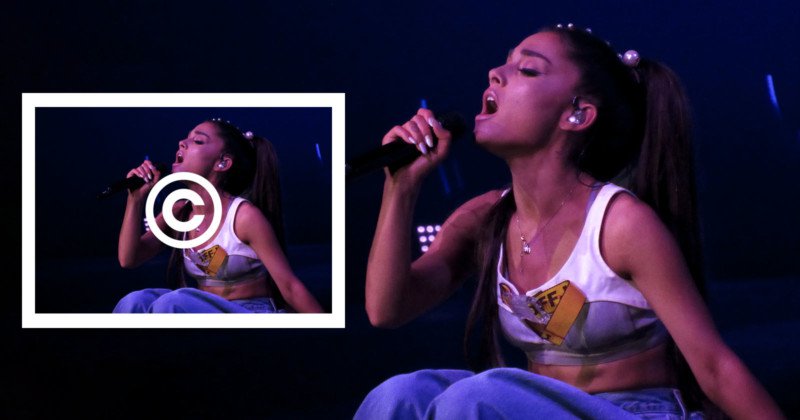 American music star Ariana Grande has sparked an outcry from photographers and media organizations with her new concert tour agreement. Reportedly a response to “greedy photographers” taking advantage of her in the past, the new contract requires that photographers hand over full copyright to their photos.

TMZ reports that Grande’s new concert photo policy resulted from years of being “exploited” by people profiting from their concert photos of her.

Sources connected to the singer say that after shooting as many photos as they wanted of Grande in concert, the photographers would then turn around and have their photos used on unauthorized merchandise — things like calendars, photo books, memorabilia, and more.

After seeing “multiple incidents” of this unauthorized photo usage, Grande and her camp reportedly decided to strike back by rolling out an ultra-strict contract for concert pit photographers.

The new concert limits photographers to covering only the first three songs at a concert from the pit. It also states that all photos are shot on a “work-made-for-hire” basis, meaning the photographer agrees to transfer all rights (including copyright) to Grande’s company.

Finally, if photographers wish to use the photos they shoot for any purpose, including journalism, they must receive written approval from Grande.

As you might expect, photographers aren’t happy about this contract, and some pretty big organizations in the world of photojournalism are publicly protesting the policy.

The National Press Photographers Association (NPPA) has published a letter co-signed by 15 other groups, including the ASMP, AP, Gannett Company (USA TODAY’s owner and the largest US newspaper publisher), LA Times, and NY Times.

“This surprising and very troubling over-reach by Ms. Grande runs counter to legal and industry standards and is anathema to core journalistic principles of the news organizations represented here,” writes NPPA General Counsel Mickey H. Osterreicher. “While we understand your desire to maintain control over your client’s persona and intellectual property, we hope that you will appreciate our position.

“As representatives of independent and staff photojournalists along with the news organizations that they shoot for, we encourage your company and Ms. Grande to create an agreement that better recognizes and values the work of visual artists with the same respect we assume she has for the rights of musicians and the worth of their songs.”

NPPA says it’s reaching out to photographers and publications with warnings against signing the contract.

TMZ notes that Grande has her own in-house concert photographer as well and that she’s more than happy to have those photos distributed to publications for use… as long as it’s approved by her.

Image credits: Header illustration based photo by Emma and licensed under CC BY-SA 2.0

This iPhone Thief Posted a Selfie to His Victim’s Instagram, Police Say