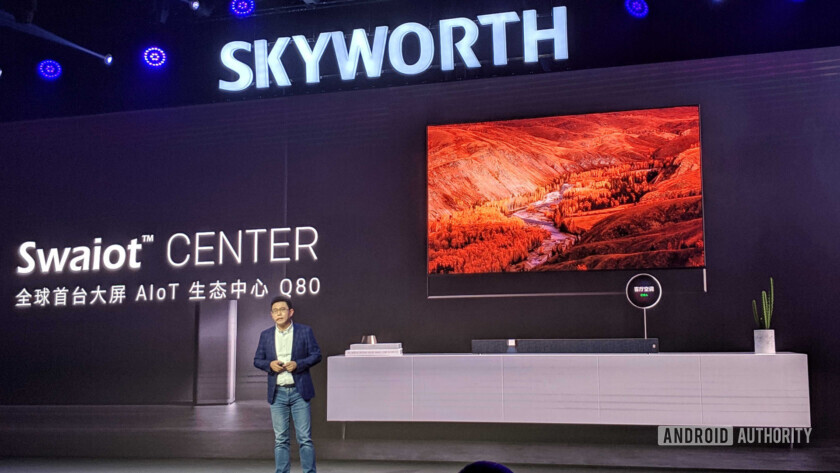 Chinese TV brand Skyworth is hoping to make a splash in the IoT space by integrating its smart home hub technology into its TV lineup.

The manufacturer said it identified TVs as a natural hub for controlling smart home devices. To that end, it added its Swaiot (Skyworth AIoT, get it?) tech to its new Q80 series TV sets as part of its new strategy to become a “big screen AIoT pioneer.”

TrensAI’s presence means you can issue commands to other Skyworth smart appliances (such as its smart refrigerator) via the Q80 TV. Fortunately, the company adds that the hub and assistant are compatible with smart devices from other brands. The company didn’t disclose how many brands are currently compatible with Swaiot and TrensAI, but said it’s working to bring support for more manufacturers.

As for the Q80 series TV itself, the set is available in 75-inch and 82-inch flavors. The device packs 4GB of RAM, 128GB of storage, an in-house image chip, a “50-core” processor, and a soundbar with four channels and ten speakers.

Furthermore, Skyworth says the TV is also equipped with a second and third screen. The former screen is a circular always-on display found just below the main screen, giving you information related to connected gadgets. The latter is mounted on top of the sound bar and works like a jog wheel to change songs and adjust volume, with a nifty projection because… reasons. The Skyworth Q80 also packs an elevating web camera called TrensAI EYE.

It’s been a couple of years since Android TV has come out and it’s been slowly maturing as a platform. It has more apps and games available for it than ever before. There could be …

NEXT: Latest WhatsApp beta gives us a first look at its dark mode

Dota Underlords: Everything you need to know

Emails in Gmail are about to get much more interactive