The Galaxy Note Edge was the very first phone with an edge display way back in 2014. It’s single-edge design never really took off, but Samsung refined the concept the following year, introducing a dual-edge design with the Galaxy S6 Edge. Since then, the curved screen has become standard on Samsung’s flagship smartphones – even if the edge has become a bit less obvious in the last few iterations.

Samsung isn’t the only manufacturer to make phones with edge displays, either. Companies like Huawei and Nokia have followed the tech giant’s footsteps, though their devices haven’t grabbed as much attention as the Galaxy S and Note lines.

Curved displays give smartphones a futuristic vibe, but they don’t provide much added functionality. They can also crack more easily when dropped on a hard surface. If you’re not scared by that, keep reading — you’ll find the best phones with edge displays below.

Samsung Galaxy S10 and S10 Plus 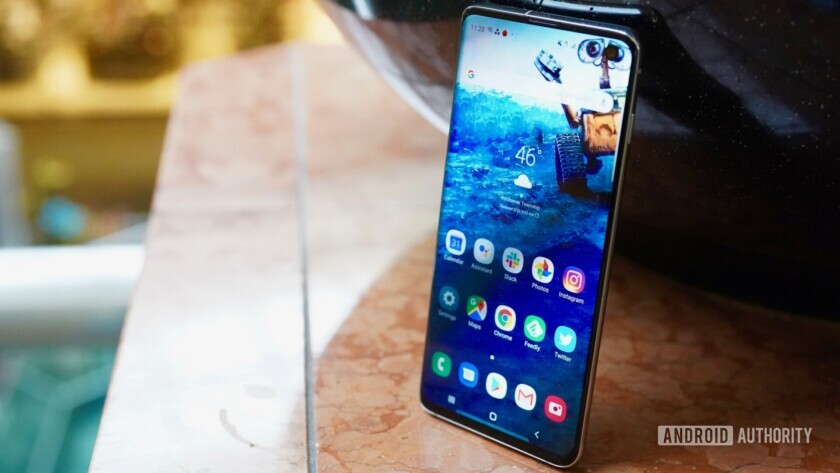 Both have the same 1,440 x 3,040 resolution, and the same 19:9 screen ratio. Both phones also use Samsung’s Infinity-O display with a Dynamic AMOLED screen and Gorilla Glass 6 for protection. They support punch-hole front-facin cameras so that they can have very high screen-to-body ratios. Finally, both of those phones have an in-screen ultrasonic fingerprint sensor.

Related: The best phones with a headphone jack

The Galaxy S10 and S10 Plus have the Qualcomm Snapdragon 855 processor inside (or the Exynos 9820 in selected markets), along with features like a USB-C port for charging, a microSD card slot for expanding onboard storage, and even the old fashioned 3.5mm headphone jack. They use rapid wireless charging and support reverse wireless charging for other Qi-based smartphones and accessories.

The best Samsung Galaxy S10 cases you can get right now

The Samsung Galaxy S10 is the main member of the four-phone Galaxy S10 family for 2019. It has the Qualcomm Snapdragon 855 processor, a curved 6.1-inch display with an embedded fingerprint sensor, three rear cameras …

The Galaxy S10 has one dual-pixel 10MP front camera, and the Plus model has the same front camera, plus a second front-facing 8MP depth sensor.

The P30 Pro is packed with features, including Huawei’s in-house Kirin 980 processor, 8GB of RAM and versions with 128GB, 256GB and 512GB of onboard storage. It also has a large 4,200mAh battery that can be charged with a fast 40W Supercharge cable, and it also supports both wireless charging of its own battery as well as reverse wireless charging of other devices.

The Huawei P30 Pro is so good in low light, it will let you photograph a black cat in a dark room (if the cat cooperates). Surprisingly, that does not mean the P30 Pro is …

The Huawei P30 Pro has some impressive camera hardware. In addition to its 32MP front-facing camera, it has four sensors in the back. One is 40MP which uses Huawei’s new Super Spectrum RYB (Red-Yellow-Blue) filter that delivers better detail in images, especially in low light conditions. There’s also a 20MP secondary sensor and a third 8MP periscope lens which supports 5x optical zoom. Finally, the P30 Pro has a fourth Time-of-Flight (TOF) sensor for gathering depth information so you can take better bokeh-style portrait shots.

Samsung Galaxy S9 and S9 Plus

Much like the Galaxy S10, the curved sides of the Galaxy S9 series are less intense than the Galaxy S8, which makes swiping in from the edges of the screen a bit easier. The sides also don’t bleed all the way to the edge anymore, minimizing the risk of accidental palm presses when reaching to the opposite side of the screen.

The Galaxy S9 is equipped with a 5.8-inch display, and the Plus version measures 6.2 inches. Both use Super AMOLED technology, with a QHD+ resolution and an 18.5:9 aspect ratio. There are only three other differences between the handsets: the camera, battery, and RAM. The Plus model has a dual-camera setup on the back, 6GB of RAM, and a 3,500mAh battery. The S9 has a single primary shooter, 4GB of RAM, and a 3,000mAh battery.

The rest of the specs are the same. Both have the latest and greatest Snapdragon 845 or Exynos 9810 chipset, an iris scanner, and a fingerprint scanner located below the camera (an improvement over the Galaxy S8). These are still some of the best phones with edge display technology around.

Like the Galaxy S series, the Note 9 sports a great curved display. It measures 6.4-inches, making it slightly bigger than the S10 Plus. The Super AMOLED screen offers QHD+ resolution and has an 18.5:9 aspect ratio.

Read next: The best Samsung Galaxy Note 9 cases you can buy

The Note 9 is a perfect phone for power users. It’s got the Snapdragon 845 or Exynos 9810 chipset under the hood — depending on the region — along with 6 or 8GB of RAM. It also sports a dual-camera setup on the back, an iris scanner, and an IP68 rating for protection against water and dust. However, the S Pen really makes the phone unique, giving users another way to interact with the device.

The Huawei Mate 20 Pro features an all-glass design and comes with Huawei’s gradient color scheme. It has a huge 6.39-inch AMOLED display with curved edges, a 19:5:9 aspect ratio and a 1,440 x 3,120 resolution.

You have your choice of five color options, including a very nice looking emerald green model. Oh, and it has a full IP68 rating for dust and water resistance. The device comes with the Kirin 980 SoC, 6GB of RAM, 128GB of storage, and a fancy new Nano Memory slot for expandable storage. It also has three rear-facing cameras — one 40MP standard sensor, one 8MP telephoto lens, and one 20MP ultra wide-angle sensor.

However it lacks a headphone jack and it has a high price, starting at almost $1,000. If you can ignore those issues, and if you can find one in the U.S., the Huawei Mate 20 Pro is one of the best Android phones you can buy.

Nokia 8 Sirocco is an upgraded version of the Nokia 8, offering Nokia’s first edge display. The phone comes equipped with a larger 5.5-inch display (up from 5.3-inches) curved on both sides, thinner bezels, and improved water protection (IP67 vs. IP54).

The handset sports a dual-camera setup kitted out with Carl Zeiss optics and 2x optical zoom. Its “Bothie” mode lets you use front and back cameras simultaneously for split-screen photos and videos. The handset is part of Google’s Android One initiative, guaranteeing a pure, bloat-free OS experience and timely updates.

The Nokia 8 Sirocco is powered by the Snapdragon 835 chipset, which is a little outdated at this point. However, it’s still more than capable of handling anything you throw at it. The phone also supports wireless charging and has 6GB of RAM, but it doesn’t come with a headphone jack, which might be a deal breaker for some. It’s available in loads of European markets, where it retails for around 650 euros (~$754). Unfortunately, the phone wasn’t officially released in the U.S.

These are our picks for the best phones with edge displays. Did we miss any worth pointing out? Let us know in the comments.

Huawei announces its first phone with a pop-up selfie camera

You can remap Samsung’s Bixby button, just not to Google Assistant or Alexa