Xiaomi’s Redmi series has been dominating sales in the entry level and mid-range segment with little competition from the likes of Samsung. However, 2019 has seen the Korean giant make a comeback with a two-way action plan via the Galaxy A and M series phones.

Designed to appeal to millennials, these phones pack great displays, good specifications, as well as a renewed focus on design. We reviewed the Galaxy M30 earlier this year and found it to be an easy recommendation as a daily driver. But does it hold its own against Xiaomi’s Redmi Note 7? We try and find out.

It has taken Xiaomi a really long time, but the company has finally refreshed its design language. The Redmi Note 7, like the Note 7 Pro, is a glass sandwich with Gorilla Glass 5 both at the front and the back. Meanwhile, the Galaxy M30 is a plastic affair that, while not as premium to look at, is definitely sturdy enough. 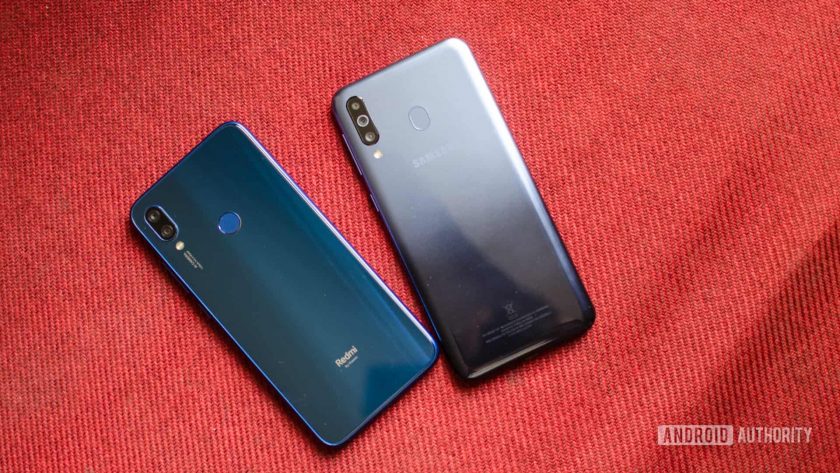 Gradients are the flavor of the season and both the phones employ them in radically different ways. While I personally prefer the more subtle, matte gradient on the Galaxy M30, the Redmi Note 7 is definitely more eye-catching. The entire back is glossy and reflective like a mirror. Unlike the Samsung, keeping the Xiaomi clean is going to be extremely hard.

Both phones look pretty similar from the front. The Redmi Note 7 has slightly thicker bezels compared to the Galaxy M30, but it isn’t too bad. Both phones have a waterdrop notch and a big chin at the bottom.

Ergonomics are great all around and, generally, there’s nothing to complain about. You might be surprised to learn that the glass Redmi Note 7 weighs 10 grams more than the plastic M30, despite the latter’s larger battery. The weight difference is definitely noticeable but not enough to be a dealbreaker.

A key feature that Samsung highlighted during the launch of the Galaxy M30 was its Super AMOLED display panel. True to its claims, the screen on the Galaxy M30 looks stunning. It is incredibly bright, looks great even at extreme angles, has an excellent contrast ratio, and boasts black levels that go deep the way only AMOLED panels can.

The IPS LCD panel on the Redmi Note 7 looks almost as good and can, for the most part, match the M30’s peak brightness. The color temperatures on the two phones are slightly different with the Redmi Note 7 opting for a cooler state of tuning. Black levels on the LCD aren’t quite as good as the Super AMOLED panel on the M30, but that really comes down to the type of display being used.

There is a slight difference in the panel size with the Redmi Note 7 clocking in at 6.3-inches vs 6.4-inches on the Galaxy M30. This has no bearing on real world use.

The Redmi Note 7 is powered by a Qualcomm Snapdragon 660 chipset. This is an octa-core chipset that uses dual clusters of Kryo 260 cores. Four of these are clocked at 2.2GHz while the remaining four are clocked at 1.8GHz and help maintain efficiency. The phone ships with three or four gigabytes of RAM and 32 or 64GB of storage. The Redmi Note 7 has an Adreno 512 GPU.

In comparison, the Galaxy M30 is powered by a Samsung Exynos 7904 chipset. The 7904 is also an octa-core chipset with the processor divided in two separate clusters for a big.LITTLE formation. Two high-performance Cortex A73 cores clocked at 1.8GHz are paired with six Cortex A53 cores clocked at 1.6GHz. The phone has variants with either four or six gigabytes of RAM. Storage is 64 or 128GB depending on the variant, but like the Redmi Note 7 you can use a microSD card to expand storage. The phone has a Mali-G71 MP2 GPU.

The Redmi Note 7 is the one to choose if you plan to do a bit of gaming.

General performance is great on both phones. In our review of the Galaxy M30, we found it to be an extremely refined device. Samsung’s software flies and if your use case doesn’t involve gaming, you won’t miss much. The M30’s GPU definitely lags behind the Adreno 512 of the Redmi Note 7. This is noticeable in games like PUBG where frame drops and choppy performance is common. The Redmi Note 7 has no such issues.

We ran a few benchmarks on the two phones to get some numbers for comparative performance.

Network performance on both phones is top notch and you’ll face no issues at all even in less-than-ideal conditions.

Let’s talk battery life. From a pure hardware perspective, the Galaxy M30 handily pulls ahead with its larger 5,000 mAh battery. That, however, doesn’t mean that the Redmi Note 7 is a slouch. Between the software optimization of MIUI and the 4,000 mAh battery, you will still have more than enough power to last you a full day of use. While the Redmi Note 7’s battery life will suffice for most users, if you find yourselves away from a charging point for extended periods of time, you might want to give the Galaxy M30 a look.

Comparing the two shots, you will notice that the Redmi Note 7’s image comes across as a bit more crisp with the warmer white balance working in its favor. The Galaxy M30’s image appears washed out in comparison.

The Galaxy M30 surpasses the Note 7 thanks to its wide-angle camera. Despite the heavy distortion in the image, the wide-angle is a lot more useful as a creative tool and should help you get some very interesting angles when out and about.

In our next image, it’s clear the Galaxy M30 did a better job at controlling highlights. The Redmi Note 7’s image appears to blow out highlights on the label ever so slightly. Not so on the Galaxy M30’s version.

In our final shot, we can see that the Galaxy M30’s proclivity towards overexposing shots works in its favor. There is a lot more visible detail in the figure and on the bottle’s artwork. For the price, both phones do a decent job but I would pick the Galaxy M30 for the added flexibility offered by the ultrawide camera.

The Redmi Note 7 and the Samsung Galaxy M30 both employ a custom skin. The M30 runs Samsung Experience 9.5 on top of Android 8.1. The software skin, like we mentioned earlier, is highly optimized for the hardware and offers a fluid user experience. There are a lot of customization options, including the ability to switch between an app drawer based layout or one which places all icons on the home screen.

The well optimized, ad-free experience offered by the Galaxy M30 pulls ahead for us despite the older version of Android.

In comparison, the Redmi Note 7 runs Android 9 Pie with MIUI 10 on top. While MIUI is generally a pleasant experience, our biggest gripe with it is the sheer amount of bloatware bundled in and the ads strewn across the experience. Xiaomi claims that it is taking steps to cut back on this with MIUI 11.

Overall, Samsung Experience 9.5 on the Galaxy M30 stands out as the more pleasing software experience despite running on an older version of Android.

Xiaomi’s Redmi series is generally quite hard to get a hold of. This continues with the Redmi Note 7 that follows the flash sale model. The phone is priced between 9,999 and 11,999 rupees (~$145 – $175) depending on the variant you opt for.

Both the Redmi Note 7 and the Galaxy M30 are solid devices for day-to-day use, but the Redmi definitely pulls ahead if you are planning to do a bit of gaming. Meanwhile, the larger 5,000mAh battery is a clear winner if battery life is a priority. We also liked the slightly cleaner software experience offered by the Samsung Galaxy M30.

While we would opt for the Redmi Note 7 for the extra bit of power that it offers, the Galaxy M30 would handily suffice for someone looking for a reliable daily driver that can last a day and some change on a single charge. Which would you chose? The flashier Redmi Note 7 or the discrete, reliable Galaxy M30? Let us know in the comments section.