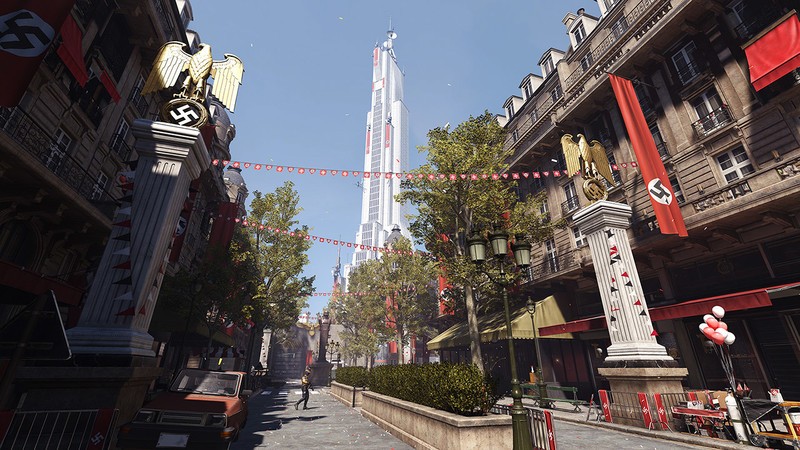 A new chapter in the Wolfenstein series is beginning, with new heroines and an open-ended approach.

After Wolfenstein II: The New Colossus was met with excitement and positive reception, developer MachineGames and publisher Bethesda have quickly come around with another Wolfenstein title that aims to shake the series up somewhat. Wolfenstein: Youngblood ditches the series’ past protagonist, BJ Blazckowicz, and instead puts you in the shoes of his twin daughters Jess and Soph in what the studios promise is “the most open-ended Wolfenstein experience to date.”

Here’s everything we know so far about this new adventure led by the Blazckowicz sisters:

What is Wolfenstein: Youngblood?

Wolfenstein: Youngblood takes place 19 years after the events of Wolfenstein II: The New Colossus and puts you in the shoes of either Jess or Soph Blazckowicz, the twin daughters of the series’ usual hero BJ Blazckowicz. With BJ missing, Jess and Soph must find their father and take down the Nazi regime from their new base of operations deep in the catacombs of Paris.

Do I need to have played other Wolfenstein games?

Because Wolfenstein: Youngblood includes a number of characters, settings, and plot points related to moments in past games, you may find the game a bit difficult to follow if you’ve never touched a Wolfenstein game before. That said, Youngblood does start with two entirely new characters, is set 19 years after Wolfenstein II, and doesn’t rely on knowledge of prior games to understand its gameplay. You should still be able to follow the plot with no prior knowledge of the series, though Wolfenstein II: The New Colossus is also available on the Nintendo Switch if you want to brush up.

Like past Wolfenstein games, Youngblood is an FPS title where you’ll move through areas, survive gunfights with enemy Nazis by using cover and an array of guns and other weapons to shoot them down, and gradually gain new abilities, guns, and gadgets to customize and strengthen your play.

Unlike past games, however, Youngblood can be played entirely in co-op, with each player choosing either Jess or Soph.

What’s in the Deluxe Edition?

The Deluxe Edition of the game gives you a Buddy Pass to share with a friend (more on that below), as well as a Cyborg Skin pack, letting you dress up Jess and Soph in titanium alloy versions of their gear.

There are also a number of pre-order bonuses for the game:

How can I play with a friend?

In addition, if you purchase the Deluxe edition of the game, you will receive a code to give to a friend that will allow them to also download and play Wolfenstein: Youngblood with you. They won’t be able to play the game solo or with anyone else if they obtain the game that way, though they can still purchase the game on their own if they want to. But your friend will be able to play through the entire game co-op with you.

Wolfenstein: Youngblood is planned for launch on the Nintendo Switch on July 26, 2019, and will cost $40.

You may have noticed when looking for Wolfenstein: Youngblood that the physical edition is a bit odd. It’s not actually a physical game cartridge. Though the game technically has a “physical deluxe edition” with a game box, the box contains a download code rather than a physical cartridge. As such, you’re just as well off purchasing the game digitally and downloading it as you would be picking up the box at the store – and you’ll need to connect to the internet to download it.

Still have questions about Wolfenstein: Youngblood? Ask away in the comments below.

You can now change teams in Pokémon GO – here’s how!

Apple Events app for Apple TV gets update for WWDC 2019