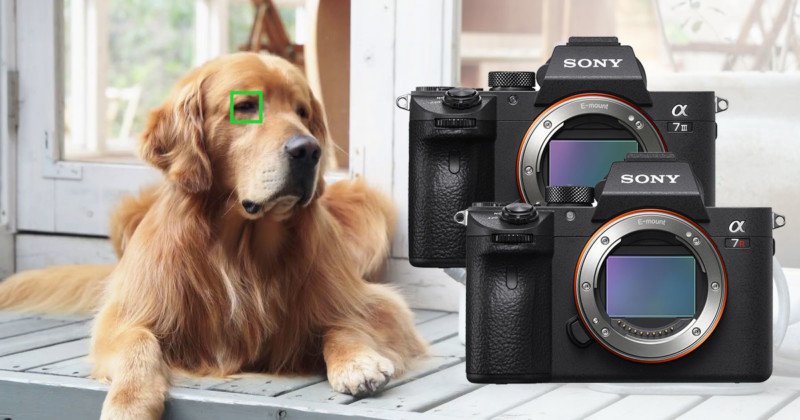 In v3.0, the existing Eye AF technology has been upgraded further with an AI-powered eye-detection system that keeps focus on the eye, even in difficult situations.

“Through machine learning, Sony has created a system that can detect—and focus on—the human eye even if the subject is looking down, partially blocked in the frame, turning or backlit,” Sony says. “This feature is available in AF-C mode with a simple half-press of the shutter button.”

This is the same technology that was unveiled in the Sony a6400 in January 2019, promised for the a7 III and a7R III at the time, and added to the Sony a9 in a firmware update in March 2019.

As Sony promised, it has now upgraded its Eye AF technology to even include animal eyes. Animal Eye AF can detect and track animal eyes — cats and dogs for now, but more animals will be supported through future updates.

“Advanced subject recognition allows the α7 III and α7R III to detect and track animal eyes, and is the first step in a robust animal-tracking AF system,” Sony says. “The development of Animal Eye AF performance will continue, increasing the range of animals recognized by the system as well the system’s ability to track their movement.”

Finally, the firmware update adds a built-in interval timer in the two cameras, allowing the creation of time-lapse movies without a separate intervalometer.

Photos can be captured with an interval anywhere between 1 and 60 seconds, with a total number of photos anywhere between 1 to 9999. AE tracking sensitivity can be set to High/Mid/Low to help smooth out exposure changes between shots.

There’s also a playback feature that lets you view an in-camera playback of the timelapses you shoot.

Firmware version 3.0 is now available for the Sony a7 III and Sony a7R III through the Sony Support website in Windows and Mac versions.

This Widest-Ever 4.9mm Fisheye Lens Can See Behind Itself

Adobe Warns That Using Older CC Apps Could Get You Sued