Original article, April 17, 2019 (3:35PM PST):After what seems like years of foldable prototypes at tradeshows like CES and MWC, we finally have the first widely available foldable device from a top-five smartphone company: the Samsung Galaxy Fold. The Galaxy Fold is Samsung’s first venture into the form-factor that may shape the industry for the next decade, but it’s still unclear how consumers will receive a first-generation product of this nature. Walking away from our briefing with the device, one thing is for certain: folding phones are really, really cool. 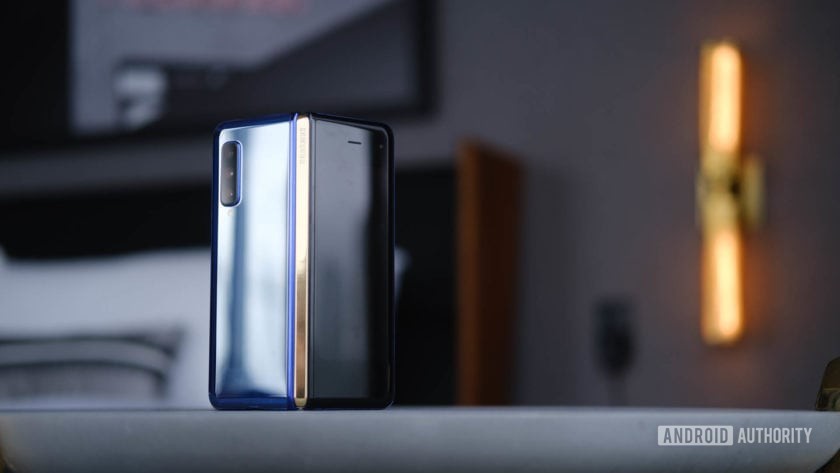 First and foremost, let’s get the specs out of the way. The Samsung Galaxy Fold is packing Qualcomm’s latest Snapdragon 855 mobile processor, 12GB of RAM, and 512GB of storage. That’s quite an insane list of specs, but if you’re going to drop nearly two thousand dollars on a smartphone, you’d probably hope it was worth its weight. This specs list makes the device nearly equivalent to a full-fledged laptop. With the 7.3-inch display you’ll get from this phone unfolded, it could easily be used to replace something like an iPad Mini.

The first smartphone I ever pre-ordered was the Samsung Galaxy S3. Its nature-inspired design looked modern, fresh, and helped make the smartphone something that fits naturally in your hand, rather than an awkward yet functional …

Other specs include a 4,380mAh battery (or rather two smaller batteries) to power the internal tablet-style display as well as the much smaller 4.6-inch screen on the front of the device. Speaking of the smaller display, it’s kind of… weird. The usable screen-to-body ratio is so small that the screen feels almost encased inside a set of large bezels. During my time with the device, it left me wanting to use the phone unfolded. While this style of use is fine for things like making phone calls, it’s not so great for content consumption.

Samsung has also put a whopping six cameras inside the Galaxy Fold. There is a 10MP standard camera on the front of the device in folded mode, a 16MP ultra-wide sensor, 12MP main and 12MP telephoto lens on the back of the device, and a 10MP lens accompanied by an 8MP depth sensor camera housed inside a rather unruly notch on the inside. Samsung wants users to be able to snap photos in whichever orientation they use the device — with six cameras you’ve got quite a bit of flexibility.

With six cameras, you’ve got quite a bit of flexibility

In order to actually fold back and forth, the Galaxy Fold uses a specialized locking hinge mechanism. Samsung says it went through hundreds of iterations of this mechanism before getting it just right, and there is an audible snap both when you unfold the device and when you fold it closed again. It’s the type of thing that I would probably fidget with for hours on end if I owned one, so it’s probably good that Samsung says it’s rated the mechanism for hundreds of thousands of folds.

Because of the two-piece design, the closed Galaxy Fold is roughly twice the thickness of a traditional smartphone, and quite a bit taller. If you have standard pockets in your jeans this shouldn’t be an issue, but there are definitely pants out there that you won’t be able to fit this device in. The phone even stuck out a bit from my pair of standard Uniqlo jeans, but it wasn’t enough that I found it to be a problem.

In folded mode, the Galaxy Fold is a bit cumbersome to use because of the small screen, but I actually thoroughly enjoyed holding it in my hand due to it’s more narrow design. That being said, the device almost screams to be used in tablet mode, because that’s where the magic really happens with this phone.

In tablet mode, the Fold is nothing short of a joy to use. It’s really nice to view YouTube videos in such a large format, even if there are relatively big black bars on the top and bottom of the display while watching standard 16:9 content. When gaming, this device becomes even more amazing. We played Asphalt 8 on the Galaxy Fold during our hands-on time with it, and it was one of the best racing experiences I’ve had on a mobile device. The large camera notch didn’t feel particularly intrusive in either of these experiences, and you can expect it to mostly melt away during content consumption.

The big, tablet-like display is fantastic for gaming.

The Samsung Galaxy Fold uses something called Screen Continuity. This means that content you’re interacting with on the primary display will also appear on the bigger display once you unfold the device, and on the Galaxy Fold, it works really, really well. If you have an app like Google Maps or YouTube open on the smaller front display, unfolding the device will make the same app appear on the larger display as well. The transition between displays was nearly instantaneous during our briefing, and it helps make the experience as seamless as possible for consumers.

Unfolded, there is a visible crease in the display, but it didn’t feel like as big of an issue as you might think. When you’re looking at the display head on you can’t really see it, and it’s only when viewing from an angle that the crease materializes. It’s also something you can feel slightly when operating the display, but again, I didn’t feel it was a major problem during my time with the device. While the visible crease clearly marks that this is a first-generation product, I really wouldn’t mind it during everyday use.

Overall, I left my briefing today feeling mostly positive about the future of foldable devices. While plastic screens clearly aren’t ideal and the small front display isn’t great to use, the magic of unfolding a narrow device to reveal an enormous tablet left me with a huge grin on my face. Unfortunately, once I left my briefing and jumped back on social media I was struck with a flood of Tweets and articles that made me question the integrity of a device I’d just been using for the last two hours.

As of the time of publishing, at least four units of the Samsung Galaxy Fold distributed to reviewers just two days ago have encountered major display issues. There are two separate reasons for these display problems, but both of them should cause a bit of concern for prospective customers.

The first problem could technically be described as user error, but it is clearly an error nonetheless. On the inner display of the Galaxy Fold, there is a plastic adhesive that allows the screen to actually bend. Almost every smartphone shipped nowadays has a screen protector or at least a protective adhesive film that is meant to be removed once the customer receives the device, so it’s only natural that people would try and peel this adhesive off after taking their Galaxy Fold out of the box. Unfortunately, this film is necessary for the Samsung Galaxy Fold to maintain the structural integrity of its display, and removing it will cause the device to stop functioning properly.

Samsung has a problem on its hands.

Apparently, the retail model of the Galaxy Fold has a layer of film in the packaging that explicitly states to not remove the film from the device, but review units sent out to journalists did not include this warning. Still, something so easily removed should probably not affect the structural integrity of the device. The fact that it does makes us weary.

The second problem is something that could not be described as user error. At the time of publishing, at least two review units have had their displays flat out stop working. Over at The Verge, Dieter Bohn had his screen bulge before becoming completely unusable, while CNBC’s Steve Kovach saw his display develop a black line down the center while half of it flashed white. Considering there were only a handful of Galaxy Folds made available to reviewers over the last two days, this isn’t a great look for Samsung.

If you want to read more about the issues that have arisen thus far we have a dedicated article tracking them.

A Samsung spokesperson has responded to the issues with an initial message, as follows:

While I quite enjoyed my time with the Galaxy Fold and it did indeed feel like the future of mobile devices. However, it would be an understatement to say these issues are a bit concerning. Swarms of people have already pre-ordered the device set to launch on April 26, and we’re eager to hear if these issues are widespread before we can recommend the device.

We’ll be sure to keep you up to date with all the news surrounding the Galaxy Fold and stay tuned for our review in the near future.

What do you think about the device? Is Samsung pioneering the future of smartphones? Was it too early to market?

See it at Samsung.com
Affiliate disclosure: We may receive compensation in connection with your purchase of products via links on this page. The compensation received will never influence the content, topics or posts made in this blog. See our disclosure policy for more details.

Getting started with Samsung SmartThings

How to use notifications in Windows 10

Apple vs Google and 11 more things you need to know in tech for Friday, Feb. 1