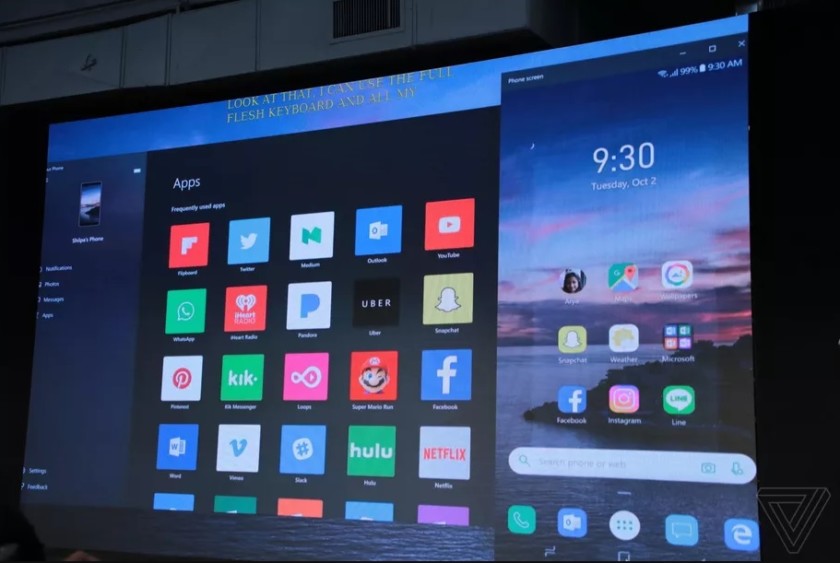 Update, April 29, 2019 (1:23PM EST): According to XDA-Developers, Microsoft added the OnePlus 6 and 6T, Samsung Galaxy Note 8 and 9, and the Samsung Galaxy S10 series to the list of phones that support Windows 10’s screen-sharing feature.

Note that Microsoft added support for the aforementioned phones in Windows 10’s Insider Preview build for Fast Ring testers. As such, some known issues include no support for touch input, always-on display and blue light filters not working, audio playing on the phone instead of the PC, limited mouse control support, and more.

Also, the screen-sharing feature isn’t yet available in stable versions of Windows 10.

Original article, March 12, 2019 (11:16AM EST): Microsoft previously revealed that users will eventually have access to full Windows 10 Android smartphone mirroring via its Your Phone app. Over the past few months, it’s slowly doled out features to the app, but now it looks like the promised smartphone mirroring is finally here.

However, the feature currently only works on select devices, so don’t get your hopes up quite yet. It will still be a while before everyone will have access to Windows 10 Android screen mirroring.

This is an increasingly mobile world, and many companies are turning to the tablet to satisfy their business needs. Tablets have responded with enterprise-level apps and the power to allow for companies to keep their …

According to Microsoft, for now, the only devices that screen mirroring will work on are the Samsung Galaxy S8 and Galaxy S9 along with the Surface Go laptop. Microsoft says it “will continue to expand the list of devices over time for both the PC and phone. ”

Eventually, you’ll be able to use Windows 10 Android screen mirroring on any PC/smartphone combo, assuming the devices meet the following requirements:

Assuming your devices meet those requirements, you will eventually have access to Windows 10 Android screen mirroring.

For now, you can still access the Your Phone app which allows you to integrate some features of your Android device into Windows 10, the biggest of which is access to photos and other media on the device without having to physically connect your phone to your PC. You can read more about that here.

NEXT: Here’s how to split your screen in Windows 10

Coolpad Legacy review: A premium-like phone without the premium price

Become a Python pro with this 12-course bundle

Deal: 7 web development kits for less than the price of 1