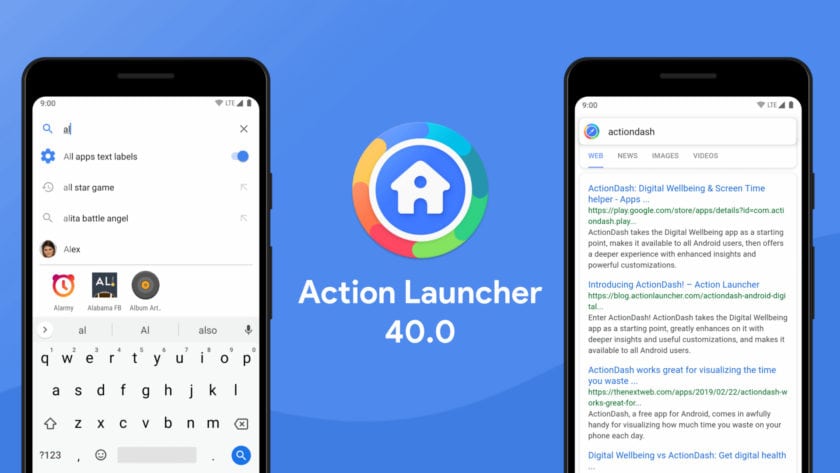 Chris Lacy announced on Friday that Action Launcher version 40 is now available. The update includes a new pillar feature that might rub some people the wrong way — Action Search.

As the name suggests, Action Search is a system-wide search option that looks across apps, contacts, the web, and even system settings. For example, you can toggle the All apps text labels on or off and have results for a movie and contact in the same vertical list of search results. Any apps that match the query show up horizontally between the keyboard and search results.

The good news is that Action Search is available to all Action Launcher users, even if they didn’t buy the Plus upgrade. The bad news is that the feature’s Action Web Search component features advertisements.

Described as a custom-built, externally-hosted web search solution, Action Web Search is Lacy’s first attempt at adopting a new business model. Even though his app has over five million installs, Lacy said in a separate blog entry that revenue is down. Lacy’s financial situation isn’t dire, but he sees Action Web Search as a “supplementary revenue model.”

Android launcher apps have long been an integral part of the Android experience. If you don’t like the way your home screens look or act, you can simply download an app to change all of …

According to Lacy, Action Launcher doesn’t link your web searches to your identity. Lacy also noted that the ads only show up when you search for something that’s not on your device.

Lastly, you’ll have to purchase the one-time $7 Plus upgrade and once-a-year $5 Supporter Pack if you want Action Search to use Google for web results.

You can download Action Launcher v40 at the link below.

Samsung shows off Galaxy Fold in its own hands-on video