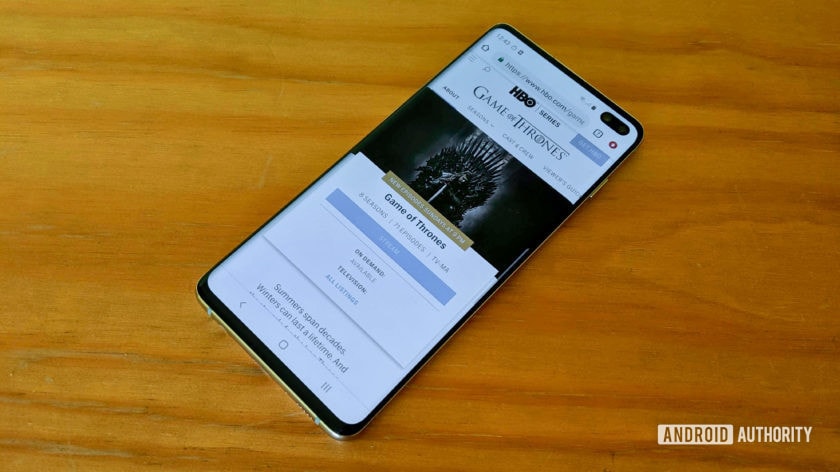 Spoilers are just the worst.

You’ve waited for months or even years to see an eagerly awaited movie or TV show finale, but due to circumstances well beyond your control you can’t catch it immediately. You go to check your phone for just a split second and bam! Spoiler city.

How to save Snapchat videos on Android

Snaps get deleted right after you view them, while stories disappear after 24 hours. That’s just how Snapchat works, and it’s one of the reasons why so many people love using it. However, some of …

Movie spoilers, TV spoilers, video game spoilers, they’re all bad and avoiding them can seem impossible. While there are plenty of ways to avoid spoilers on your PC or laptop thanks to various browser extensions and programs, it’s much harder to block spoilers on your phone — the thing you almost certainly use far more often than a desktop most days.

With HBO’s epic fantasy drama Game of Thrones rapidly approaching its finale with Season 8, we’re here to help you avoid GoT spoilers on your phone, because the internet is dark and full of, well, nasty spoilers.

In this guide, we’ll share some of our expert tips and tricks to avoid spoilers on your phone, be it an Android handset or an iPhone!

Most Android users will be more than familiar with Google Chrome having been the default browser app on Android devices for many years now.

If you’ve used Chrome on desktop, you’re probably also aware of Chrome extensions that let you add helpful tools to Google’s browser. What you might not know is that there are plenty of extensions dedicated to blocking spoilers.

Judging by reviews and popularity, the title of best spoiler blocker for Chrome goes to either Spoiler Protection 2.0 or Unspoiler. Unfortunately, neither of these will help us on our phones as Chrome extensions aren’t supported natively on mobile.

Thankfully, we have a couple of options to get around the issue:

There are somehow more apps on the Play Store and App Store dedicated to revealing spoilers rather than blocking them, but we’re not completely out of options.

Spoiler Block and Spoilers Blocker on Android both let you add keywords to avoid spoilers for your chosen shows, movies, or games. Both apps have fairly poor reviews, though, with users citing login issues and spoilers sneaking through the word filters.

iPhone users are also underserved, but do get the Shut Up app, which lets you disable comment sections on websites. While most website endeavor to avoid spoilers in news and reviews articles, comment sections are the Wild West so removing them completely is a safe, if extreme option.

Shut Up isn’t available on Android, but there is an extension for Chrome and Firefox that can be enabled using the steps in the first section of this article.

If you’ve ever watched any YouTube video related to the thing you don’t want spoiled there’s every chance a video on the topic will show up in your feed thanks to YouTube’s aggressive recommendation algorithms. These are usually accompanied by spoiler-tastic thumbnails with massive text and possibly even a big arrow that directly points your attention to a massive spoiler.

Spoilers are everywhere on social media, but if you really, absolutely can’t not check Facebook or Twitter for a day or so then there are options to help avoid spoilers.

Twitter is the best when it comes to blocking spoilers as there’s a simple-to-use mute option. Just tap your profile icon > Settings and privacy > Muted words then add keywords.

Facebook is apparently testing a similar keyword snooze feature, but it hasn’t yet rolled out to the stable app. Our advice is to tinker with your News Feed and snooze any friends or groups that might reveal spoilers — this approach can also be applied to Instagram.

Spoilers don’t just come at you in word form, of course. When a hyped show or movie debuts, it doesn’t ever take long for netizens to transform spoilerific scenes from any type of media into a cheeky GIF or meme.

Your safest bet is disabling images entirely until you can catch up. Unfortunately, while there was once a native option in Chrome on Android to disable images this was removed in a later update.

As an alternative, the Images ON/OFF extension does the job nicely for Chrome, while Image Block X works well for Firefox. The only free option I could find for iPhone users is Image Blocker.

Most good entertainment writers will try to keep spoilers out of headlines, but it only takes one rogue notification from “MovieSpoilerNews24/7” to ruin your day.

Don’t use the internet

Even with all of these tips, it’s still possible a spoiler may sneak in through the cracks whenever your phone has some kind of data connection. Turning Wi-Fi and mobile data off is an extreme measure, obviously, but people used to live without the internet. You’ll survive.

Don’t use your phone

The nuclear option. Turn it off. Throw it in the ocean. Smash it into little tiny pieces. It’s the only way.

Do you have any secret tips for avoiding spoilers on your phone? Let us know in the comments and don’t post any Game of Thrones spoilers, please. I haven’t caught up yet.

LG’s 5G phones could be in jeopardy because of Qualcomm

Snapchat not working? Here’s everything you can do to fix it!