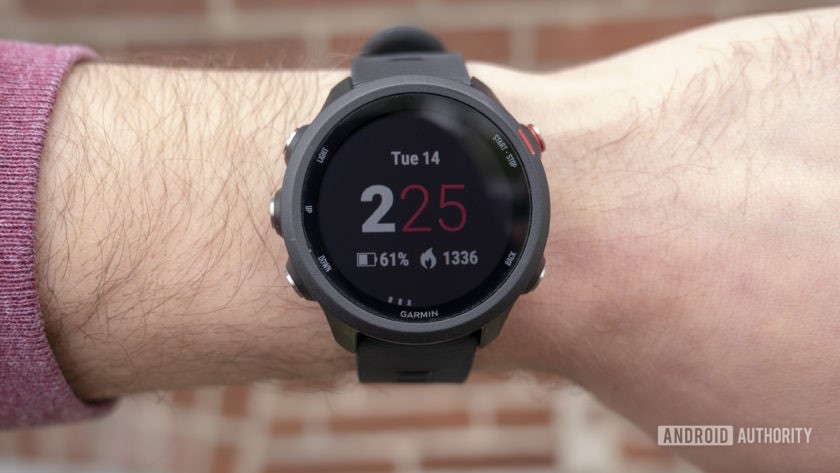 24 days: That’s how long ago Garmin sent me its new mid-tier running watch. That’s also how long I’ve had it on my wrist, too.

When Garmin announced its updated running watch lineup back in April, I didn’t think the standout of the bunch would be the middle-of-the-road Forerunner 245 Music. I was wrong.

It offers most of the features many look for in a GPS running watch — including onboard music support — without a gigantic price tag. Read our full Garmin Forerunner 245 Music review to learn why this might be the watch to buy.

This is a somewhat condensed review. We don’t go into details on the Garmin Connect companion app in this review, but you can learn all there is to know about it right here.

The Garmin Forerunner 235 was one of the company’s most popular running watches of all time, but it was in need of an update. So, Garmin took a handful of features from higher-end running watches (645 Music and Fenix 5), paired them with some of the newer features introduced in the Vivosmart 4, and called it the Forerunner 245 Music.

I won’t get into too much detail on design — this is a Garmin running watch through and through. It essentially looks like all other Garmin watches in the Forerunner series. Since this is more of a budget-friendly device, the case is made of durable plastic instead of stainless steel. This allows for the watch to weigh only 38.5 grams, meaning you won’t notice it constantly when it slides around on your wrist.

A few other Forerunner 245 Music design tidbits before we move on:

I think most people will find the Forerunner 245 Music very capable. Garmin’s naming scheme makes it easy to understand where the 245 series fits in with the rest: It’s the successor to the super-popular Forerunner 235 series and a full step down from the more expensive Forerunner 645 series. As such, the 245’s feature set fits right in line with those other devices.

There are plenty of great fitness trackers on the market right now, each of which cater to different users with different needs. Just need to keep an eye on your daily activity levels? Maybe the Fitbit …

The watch doesn’t have more advanced features like Garmin Running Power or the stainless steel bezel of the 645 series. However, it gets a number of upgrades over the 235 series: Bluetooth Smart sensor support, pool swimming, strength workouts, Galileo, UltraTrac mode, all-day stress tracking, and more.

The biggest caveat with the Forerunner 245 series is the lack of a barometric altimeter, which means your elevation data won’t be as accurate. This is the main reason someone might want to upgrade to the 645 series, but I didn’t really find the omission to be a huge deal. Still, it’s a curious omission — even Garmin’s cheaper Vivoactive 3 series, Vivosmart 4, and Vivosport have altimeters.

It’s almost like the company had to remove something, so it chose the altimeter at random.

Regardless, there’s plenty here that intermediate and advanced runners will enjoy. Garmin included Running Dynamics support (I couldn’t test this as I don’t own a Running Dynamics Pod or HRM-Run/Tri), as well as Garmin Coach support. Garmin Coach gives all types of runners the tools to reach a certain goal, whether that’s a 5K, 10K, or half marathon. Personally, I started a half marathon Garmin Coach plan during my testing and I’m loving it. You get all the instructions for each run right on your watch.

The Forerunner 245 series also gets helpful features like training status, which tells you if you’re over- or undertraining; training effect, which lets you see how your workouts influence your speed and endurance; and training load, which compares your recent exercise volume to the optimal range for your training history. As a regular runner, all three of these features are super helpful. Garmin’s estimated recovery suggestions after runs are getting more accurate too.

There are a ton of other features packed into this thing, many of which I’ve already covered in other Garmin product reviews. Here are the final few features I’d like to touch on:

To see how it performs, I tested the Forerunner 245 Music’s heart rate sensor against the Fitbit Versa and Polar H10 chest strap at the same time during a 43-minute treadmill run. You can see the results below, with peak heart rate pointed out for each device.

For this comparison, let’s use the Polar H10 as the control. The Forerunner 245 Music and Polar H10 both hit peak heart rate — 183 and 182bpm, respectively — at roughly the 35-minute mark. Throughout the entire workout, both devices also continued to incrementally rise, with more stark highs and lows being recorded on the Garmin device.

Not only did the Fitbit Versa record my peak heart rate at only the 26-minute mark, it failed to consistently rise to 180 bpm after that point.

Overall, I’m impressed with the Forerunner 245 Music’s heart rate sensor. It seems as though this version 3 sensor is a step up from the Garmin Elevate sensors that came before it.

Finally, Garmin’s advanced sleep tracking metrics are here, allowing you to track your deep, light, and REM sleep stages, as well as movement and how often you wake up throughout the night. Of course, I’m sleeping when this is happening so I can’t really tell how accurate it is, but I have yet to notice any wildly inaccurate metrics in Garmin Connect. I had a particularly restless sleep one night, and Garmin Connect reflected that in the morning.

As mentioned, the pulse oximeter can kick in automatically while you’re sleeping. I still find it odd that it only tracks for a few hours during the night, instead of the whole time I’m sleeping. I’ve reached out to Garmin for clarification on this.

As the name implies, the Forerunner 245 Music comes with onboard music storage — up to 500 songs to be exact. You can load up local music files from your computer or transfer entire playlists from streaming services like Spotify or Deezer. The music transferring process is easy — just download the Garmin Express computer app, plug in your device, and transfer your music over. It doesn’t take nearly as long to transfer as, say, the Fitbit Ionic, either. A couple hundred of my songs transferred over in only a few minutes. The 245 Music also paired with my Fitbit Flyer in just a few seconds, and Bluetooth connection between the two devices has been great.

Of course, there’s always room for improvement. Not all streaming services are supported, though most users won’t need more than Spotify — something competitors like the Fitbit Ionic and Versa smartwatches still don’t have. Specifically, the Forerunner 245 Music supports Spotify, Deezer, and Pandora.

One more gripe and I’ll move on: The only differences between this model and the standard Forerunner 245 (which is $50 cheaper) are music storage and Wi-Fi support. Getting people to spend that extra $50 just for music storage feels like a cash grab — surely it doesn’t cost Garmin that much to include extra memory.

The only other omission that may deter buyers is Garmin Pay support. It’s unfortunate users at this price point miss out on contactless payments — even the cheaper Vivoactive 3 and 3 Music have Garmin Pay support. However, Garmin has to give users some reason to upgrade to the more expensive Forerunner 645 line.

On a positive note, I love that the 245 Music comes with Garmin’s new incident detection feature. If your watch senses you may be in trouble — if you fall, for instance — the incident detection mode will automatically send your real-time location and a message to your emergency contacts. I haven’t been able to make incident detection kick in automatically, but maybe I’m not falling hard enough. There’s also a way to manually trigger this mode — called Garmin Assistance — by navigating to the app directly or holding down the top-left button.

You’ll need your phone nearby to use this feature, since there’s no LTE option for the Forerunner 245 Music. Leave it at home, and the incident detection feature won’t work.

Like all other recent Garmin watches, the Forerunner 245 supports smartphone notifications, and allows you to respond to SMS and answer or reject calls. It’s a smartwatch through and through, though it would’ve been nice to see Garmin Pay support here.

The Garmin Forerunner 245 Music is available on Amazon and Garmin.com for $349.99 in black, white, and Aqua color options. There’s also a non-music variant available for $50 less.

With the Forerunner 245 Music, Garmin struck the right balance between features and affordability. For $350, you get an accurate, feature-packed device with many of the same running features as higher-end models.

The decision to remove the altimeter is puzzling, and I still don’t like that you have to pay a full $50 extra for music and Wi-Fi. The omission of Garmin Pay stings too. Those three features are important to many users, but you might find yourself looking past them, considering all the other things offered here.

If you need something with a barometric altimeter and Garmin Pay, check out the Forerunner 645 Music. It’s $100 more expensive, though. If you don’t want to spend as much money and don’t mind getting a less powerful watch, the Vivoactive 3 Music is also a great option.

Next: How to use your fitness tracker to actually get fit