If you were shooting astrophotography over the past couple of nights and noticed a strange line of bright dots traveling across the sky, you might have spotted SpaceX’s Starlink satellites. That’s what Marco Langbroek caught on camera yesterday in the video above.

SpaceX’s Starlink is a project to put a constellation of 12,000 satellites in three orbital shells around Earth by the mid-2020s. The low-cost, high-performance satellite bus would be used for a new space-based Internet system.

Yesterday SpaceX launched the first 60 operational satellites, and Langbroek caught the “train” of satellites passing over the city of Leiden in The Netherlands about 22.5 hours after they were launched on a Falcon 9 rocket from Cape Canaveral in Florida. Langbroek was shooting with a WATEC 902H camera and a Canon FD 50mm f/1.8 lens.

SpaceX shared a photo of the satellites in their stacked configuration after they reached orbit and before they were deployed: 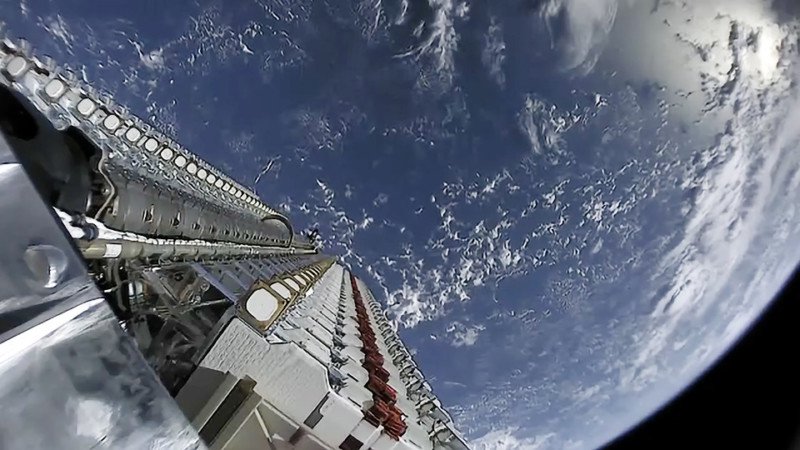 The satellite train is so bright that they can easily be seen with the naked eye from the ground and captured with an unaided camera, as this video by Marcin Łoboz of Poland shows:

We’ll know soon enough if or how Starlink satellites will affect our views of the night sky and astrophotography. It’s estimated that there are roughly 5,000 satellites in orbit around Earth right now, but SpaceX is working to more than triple that number over just the next year.

Update: If you’d like to check when the Starlink satellites will pass over your location, here’s a new tool that help you easily do so. (Thanks, cmdr2!)