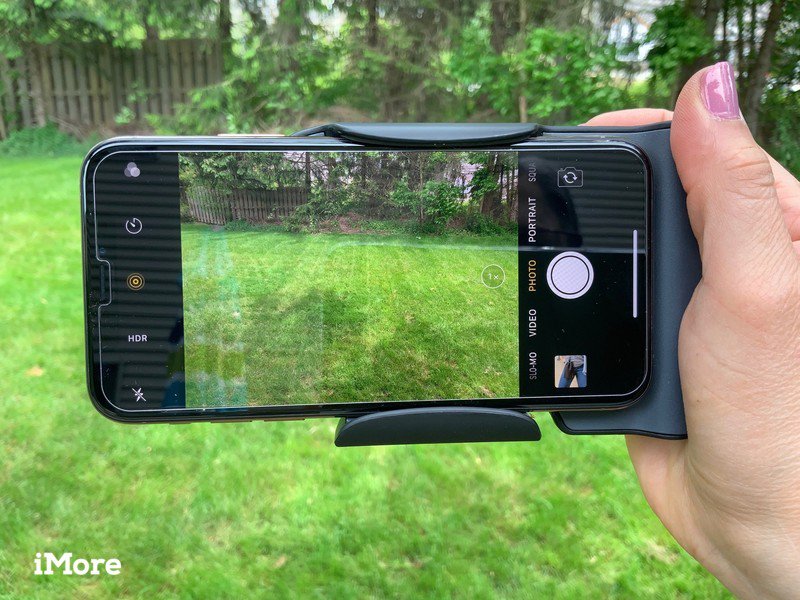 Take your iPhone photography to the next level with this useful kit.

The Adonit PhotoGrip Qi is a photographer’s kit well worth its price. It contains a grip to give you more stability while taking photos. The grip also happens to be a wireless charger and a phone stand. There’s a Bluetooth remote, a small tripod, a carrying bag, and a neck strap included.

Adonit’s PhotoGrip Qi is a multi-tool kit for iPhoneographers. The main piece is the grip itself, which expands to fit just about any 4.5-inch or larger smartphone. Note that while it still works with a thin case, a phone in a thick case will not fit into it.

The grip itself serves several purposes. Its main purpose is the give you a better grip on your iPhone, but it does much more than that. Amazingly, it’s a wireless charger and 3000mAh battery. Pop it on your wireless-compatible iPhone and it’ll charge your phone while you’re busy taking photos. Between uses, charge the grip with the included cord, which is USB-A to USB-C. The grip has a USB-C port. While the cord is included, the wall charger is not.

The grip can be used as a stand to hold your phone upright in either landscape or portrait position. In my testing, however, the stand is only moderately stable. It works okay on a hard surface, but when I placed it on a softer surface, it fell right over. Even on a hard surface, any jostling or even a strong gust of wind might knock it over. Luckily there’s a tabletop tripod included in the kit, which is far more stable. The tripod has a screw on the top which screws into the threaded hole in the bottom of the grip. In fact, that hole is standard tripod sized; I was also able to screw it onto a full-sized tripod made for DSLR cameras. So you’re not limited to the small tripod that comes with this kit. The tripod can also be held closed for a different way to grip your phone.

I love that it’s charging my phone while I’m taking photos, without having to think about it.

When you’re using the grip, you could still press the shutter button on your screen or, press the button on top of the grip, which feels very natural. That button appears at first glance to just be part of the grip, but it’s actually a removable Bluetooth shutter remote. You must connect it to your iPhone in the app settings, then you can use it as part of the grip or separately. The remote works from up to 10 meters (roughly 33 feet) away.

Also included is a carrying pouch, which connects to the neck strap. The neck strap is nice and wide so it’s comfortable to wear. It is rather long, though, so it hangs down almost to mid-thigh on me. The Adonit Photogrip Qi comes in Black, as seen in my photos, or White (with mint green accents.)

The grip allows your phone to feel more like a camera, so it’s very comfortable to use and does give you a more secure hold on your iPhone. I love that it’s charging my phone while I’m taking photos without my having to think about it. Having the shutter button double as a Bluetooth remote is a clever touch. The tripod and carrying pouch complete the kit nicely.

While I tend to use thin cases anyway, a thicker case won’t be compatible with this. My other issue is the stand’s stability. The tripod works well, but if you’re using the grip without the tripod, you’re still supposed to be able to use it as a stand. You can, but I’d be leery of doing so. It’s just not very stable in either a horizonal or vertical position.

The Adonit PhotoGrip Qi would be a nice addition to any iPhone photographer’s collection. It’s a secure phone grip, a 3000mAh wireless power bank, and a stand. The “shutter button” is actually a Bluetooth remote which can be used on or off the grip. Rounding out the kit is a small tripod, carrying case, charging cable, and neck strap. I love that it has so many features for the price and the bonus charger makes it even better. The phone stand doesn’t seem to be as stable as it’s supposed to be, but luckily, it comes with a very stable tripod.

Geting a login fail error on Snapchat? Here’s the fix!