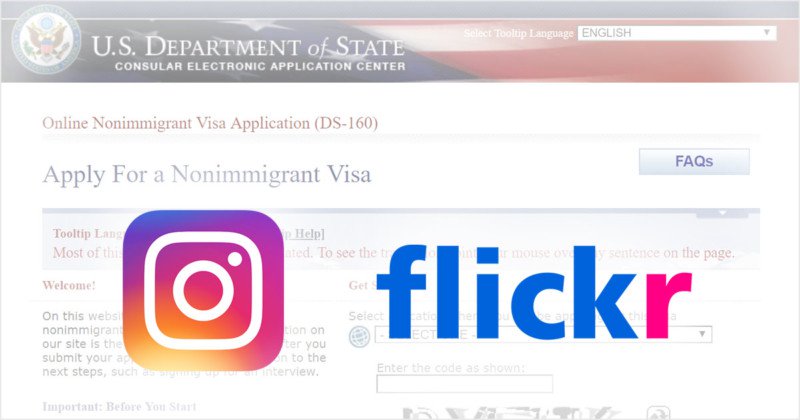 The US State Department is now requiring that virtually everyone applying for US visas submit their social media usernames, including those for the photo-sharing services Instagram and Flickr.

The change has now taken effect after first appearing in new proposed rules back in March of 2018. It’s part of a “vast expansion of the Trump administration’s enhanced screening of potential immigrants and visitors, AP reports.

An estimated 15 million foreigners who apply for visas each year will be affected by the change. Only certain diplomatic and official visas will be exempt from the new social media requirement.

You’ll find the new demand for “social media identifiers” on the revised visa application forms just released by the department.

In addition to selecting the major social media platforms present in the list, applicants can also volunteer their usernames for services not listed.

“National security is our top priority when adjudicating visa applications, and every prospective traveler and immigrant to the United States undergoes extensive security screening,” the US State Department says. “We are constantly working to find mechanisms to improve our screening processes to protect U.S. citizens, while supporting legitimate travel to the United States.”

Canon’s 7D Line Has Come to an End: Report

You Can Now Buy the First 1TB microSD Card

Yes, Fujifilm’s GFX100 is the Same Size as Canon and Nikon Flagship DSLRs