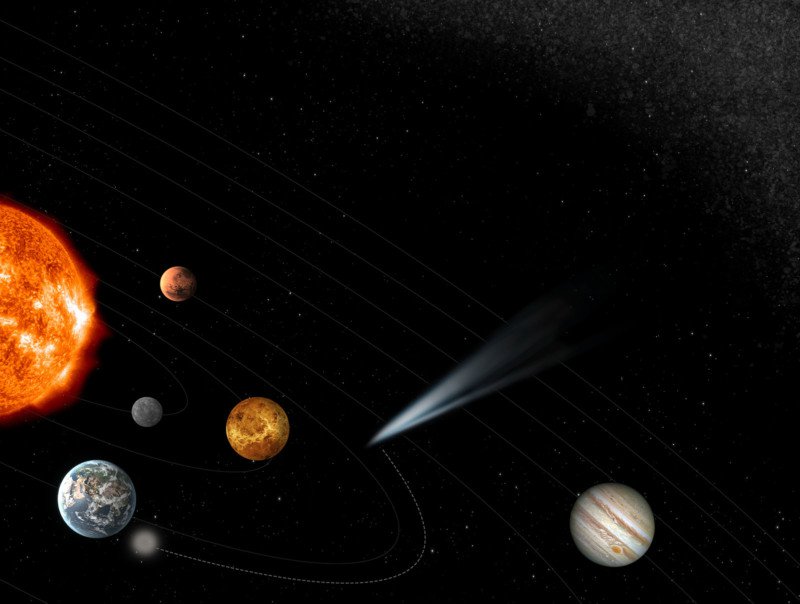 The European Space Agency (ESA) has announced a new mission that will have the goal of intercepting a comet with a special composite spacecraft in order to shoot photos of it.

Called “Comet Interceptor,” the spacecraft “will be the first spacecraft to visit a truly pristine comet or other interstellar object that is only just starting its journey into the inner Solar System,” ESA writes.

The plan is for the spacecraft to wait around at the Sun-Earth Lagrange point L2 about 1.5 million kilometers (932,000mi) behind Earth as viewed from the Sun. The spacecraft will then fly to an as-yet-undiscovered comet for a flyby when the comet is headed to Earth’s orbit.

Initially a single composite spacecraft, the Comet Interceptor will split into three separate spacecraft a few weeks before intercepting the comet. Those spacecraft will then surround the comet and shoot photos from different perspectives.

Those photos will then be used to create 3D models of the comet, which will contain “unprocessed material surviving from the dawn of the Solar System.”

“Pristine or dynamically new comets are entirely uncharted and make compelling targets for close-range spacecraft exploration to better understand the diversity and evolution of comets,” says ESA science director Günther Hasinger. “The huge scientific achievements of Giotto and Rosetta – our legacy missions to comets – are unrivaled, but now it is time to build upon their successes and visit a pristine comet, or be ready for the next ‘Oumuamua-like interstellar object.”

Previous comet missions were all to short-period comets that orbit the Sun in less than 200 years — Comet Interceptor will target a comet visiting the inner parts of our Solar System for the first time. In the past, these “new” comets were discovered too late for scientists to launch a mission to reach and study them, but since Comet Interceptor will be standing by in space, it’ll be ready to meet a new comet when it’s discovered.

Comet Interceptor is designated a fast-class mission, meaning it will be implemented from selection to launch readiness in just 8 years. If all goes according to plan, the spacecraft will catch a ride to space aboard ESA’s exoplanet-studying Ariel spacecraft in 2028 before turning on its own propulsion system.

(via ESA via Engadget)

This Multi Turret Lets You Mount 3 Lenses on 1 Camera

Panono to Start Charging for Stitching Service, and Customers are Furious