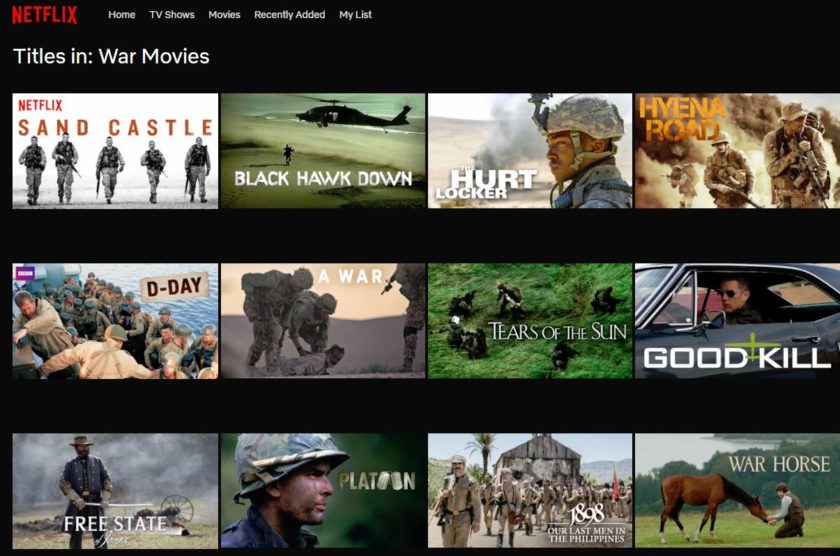 Movies that depict war and military conflict have been around almost since the very beginning of moving pictures. From films that honor those that server their country in battle, to movies that have an anti-war stance, you will find some of the best war movies ever made if you sign up for a Netflix streaming subscription.

15 best anime on Netflix you can binge right now

Netflix is a low-key good source for anime. You can find older classics like Rurouni Kenshin for a good Sunday evening binge. Netflix also licenses anime specifically for the platform. Some examples include the Little …

We have picked our top 10 best war movies on Netflix that are currently available. As you can see, war films can be set in many different time periods, and a couple even cross genre lines into horror and satire.

Editor’s note: We will update this post as new Netflix war movies are added to the service and others are removed.

This 2001 film from director Ridley Scott is one of the best war films ever made, depicting U.S. soldiers during the real-life events of Somalia as it falls apart in 1993. The movie shows an attempt by the U.S. to kidnap two major lieutenants of a Mogadishu warlord. Unfortunately, the mission resulted in two of the U.S. Army’s Black Hawk helicopters being shot down by enemy forces. The rest of the movie depicts, in a highly gritty and realistic way, how the U.S. soldiers on the ground tried to rescue the Black Hawk crews and get them to safety. Black Hawk Down includes performances from a lot of young actors who would later go onto huge roles in other major films, including Tom Hardy, Eric Bana, Nikolaj Coster-Waldau, and Orlando Bloom, along with already established actors like Sam Shepard, Josh Hartnett, and Ewan McGregor.

The winner of the Best Picture Academy Award for that year, this Netflix 2009 war movie stars Jeremy Renner as a member of a U.S. Army bomb disposal unit during the second Iraq War in 2004. Renner’s character has to deal with the fact that he could die instantly while trying to defuse the unexploded bombs that have been discovered in the war. The movie is all about the immense pressure that the bomb unit is under, and how it could make any person break. This film put Jeremy Renner on the map as a major movie actor, and you can look for one of his Marvel Cinematic Universe teammates, Anthony Mackie, in The Hurt Locker as well.

Another Netflix war movie that’s an Academy Award winner for best picture, this movie had a huge impact on pop culture in general when it was released in 1986. Director and writer Oliver Stone took his own experiences as a soldier in the Vietnam War and created a fictional film about the conflict. However, his storytelling and direction made Platoon look and feel a bit like a documentary, and at the time it was called the first movie about the Vietnam War that depicted how it really was for the ordinary combat soldier to fight in that controversial conflict. It also has some amazing performances by Willem Dafoe and Tom Berenger, as two Army sergeants on opposite moral sides, each trying to win over a new private, played by Charlie Sheen.

This Netflix original war movie is also one of its biggest budgeted films. Released in 2017, this is a fictional movie, but it’s based on the real-life exploits of U.S. Army general Stanley McChrystal. Brad Pitt plays General Glen McMahon, who has been asked to try to wrap up the current war in Iraq in 2009. This satirical movie shows General McMahon trying to get more troops together for one final push to win the war, but he is faced with opposition on several military and political fronts to his plan. War Machine uses humor to show what the military has to deal with besides fighting the enemy, and it has a huge (some might say over-the-top) performance by Pitt.

Tears of the Sun

This 2003 Netflix war movie stars Bruce Willis as a leader of a U.S. SEAL team assigned to rescue a U.S. citizen who is trapped in Nigeria during a nasty civil war. Naturally, this rescue operation does not go as planned and the SEAL team soon becomes involved in saving Nigerian refugees. This is more of an action-oriented war movie that also has some messages it wants to make about how we might treat refugees in a military conflict.

Director Steven Spielberg wanted to make a movie about the terrible events of the Holocaust during World War II but also wanted to make a film that was ultimately hopeful rather than completely depressing. The result was 1993’s Schindler’s List, which chronicles the real-life efforts of German businessman Oskar Schindler to save as many Jews from the Nazi’s extermination camps as he could. It’s not easy to watch, but it’s one of the best war-themed movies on Netflix, and indeed one of the best movies on Netflix, period. It’s powerful and emotional and proves the human spirit can overcome even the worst atrocities.

Here’s another satirical Netflix war movie to check out that stands from some of the other films on this list. Nicolas Cage plays an international arms dealer in this 2005 movie, who doesn’t care which side of a conflict buys his weapons; he just wants to get paid. While highly humorous, Lord of War also brings up a lot of serious points about how the arms trade makes wars and death easy for almost any government to get into. Cage is also at his best here, as he takes his usual persona to this role, with lots of fun and crazy line readings.

Director Steven Spielberg returns to our Netflix war movie list with this 2011 movie.  Set during World War I, it depicts how the owner of a beloved horse deal with the animal leaving to join the U.K. Cavalry. The film depicts the horrible events that the horse, Joey, has to endure in the war. It also shows its original owner, played by Jeremy Irvine, fighting himself, and as it happens he gets reunited with Joey. Look for MCU actors Tom Hiddleston and Benedict Cumberbatch in supporting roles as two British Cavalry officers.

This is a very recent Netflix original war movie, released earlier in 2019. Ben Affleck, Oscar Isaac, Charlie Hunnam, Garrett Hedlund, and Pedro Pascal all play members of a former U.S. Special Forces team who feel they need a new challenge. The result is that this five-man team decides to invade Columbia to steal money from a major drug lord. However, getting the money is easy compared to the team getting out of the country alive as they are attacked by the crime lord’s forces. It’s an action-packed movie that is pure popcorn fun if you love fast-paced films.

One of Netflix’s first original films, this 2016 war movie is perhaps the most “out there” film on this list. Spectral has a U.S. special forces team enter the war-torn country of Moldova. However, instead of normal human soldier, this team has to face off against ghost-like entities. Yes, this is a ghost war movie, but it’s also pretty action-packed and fun to watch. It really gets going in the second half, as the U.S. forces, with some help from scientists, create weapons designed to fight off the ghosts.

There are a ton of other great Netflix war movies to stream that didn’t quite make our top 10 list. Here’s a look at just a few of them:

Android Q forces you to swipe right (to clear notifications)

Deal: Get a lifetime subscription to Getflix for only $49 (94% off)