When all of us are carrying phones that can snap a thousand photos a minute and are connected to cloud systems that can store millions, there’s an undeniable charm to physical photos. The ones deemed worthy; the ones so special that they must be transformed from bit to atom.

While photo printers are nothing new, Polaroid is twisting up the concept (and rebooting an idea from a few years back) with the “Polaroid Lab.” It’s a $129 tower that uses the light from your phone’s screen, bounced off a series of mirrors, to make a proper Polaroid from the photos you’ve already taken.

Open your photo in Polaroid’s companion app, place your phone (any iPhone after the 6S, and “current models of Samsung, Huawei, Google Pixel, and One Plus” Android handsets) on top of the tower, and push the red button. A few seconds later, out pops a grey Polaroid. Did it work? You’ll have to wait a few minutes for it to develop, just like the good (?) ol’ days.

Is using light and mirrors better than just sending a picture to a printer over Bluetooth or Wi-Fi and blasting the ink out from a cartridge? Maybe not. But it’s neat! It’s physical and sciencey and fun — and, arguably, as close as you can get to having a “true” Polaroid picture of a moment that’s already happened.

The company says that the Polaroid Lab works with its existing I-Type and 600 series films… which, as any enthusiast could tell you, doesn’t come cheap. Expect each photo printed here to cost you a buck or two. That’s a bit steeper than many at-home printers and definitely pricier than just blasting out some 4x6s at Costco, but this thing will almost certainly still find its audience amongst those going for a certain look.

There’s also a way to “blow up” one photo across a bunch of Polaroids, if you’ve got the film to spare. Here’s a demo video of what that looks like:

If the whole concept seems familiar, you might be remembering the Impossible Instant Lab — a product of a veeeery similar vein that raised over half a million dollars on Kickstarter back in 2012. The Impossible Instant Lab was discontinued in July of 2017… just a few months after the team behind it acquired the rights to the Polaroid brand. This seems to be a reboot of the concept, now with the added weight and officialness of the Polaroid name thrown behind it.

The team behind the Polaroid Lab says it should hit shelves by October 10th.

Takeaways from F8 and Facebook’s next phase 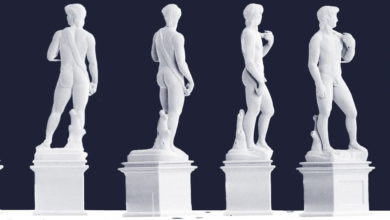 Micro-angelo? This 3D-printed ‘David’ is just one millimeter tall

Need more buttons for your PS4 controller? This gadget adds two on the caboose