content is brought to you by MNML Case, makers of the world’s thinnest phone case. Save 25% on your Pixel 4 or Pixel 4 XL case using the discount code AAPixel4.

The Google Pixel 4 is here. It’s finally here! After months of leaks, which almost spoiled all the fun, the search giant announced the Google Pixel 4 and Google Pixel 4 XL, its flagship phones for the year. Like previous generations of Pixel phones, the 4 series is available in small and large sizes. Other than the physical size, screen resolution, and battery capacity, the two devices are identical. Read our full Google Pixel 4 hands-on to see what we think about the latest from Google.

Google has adopted a slightly different design for the Pixel 4 series. The Pixel, Pixel 2, and Pixel 3 all featured a two-tone rear panel that helped to break up what would otherwise be a boring slab. Apparently, boring is in this year. Google ditched the two-tone look for a solid color (Just Black, Clearly White, or the limited edition Oh So Orange). Where the white and orange have a matte finish, the black is glossy and, yep, is a fingerprint magnet.

The Pixel 4 has the narrower profile of a modern phone thanks to the 19:9 aspect ratio display. All three phones feature a black aluminum frame that wraps around the chassis. Google painted the frame in multiple layers to give it a textured finish. This frame is sandwiched by slabs of Gorilla Glass 5. I like that each variant borrows a color from its brethren for the power button. 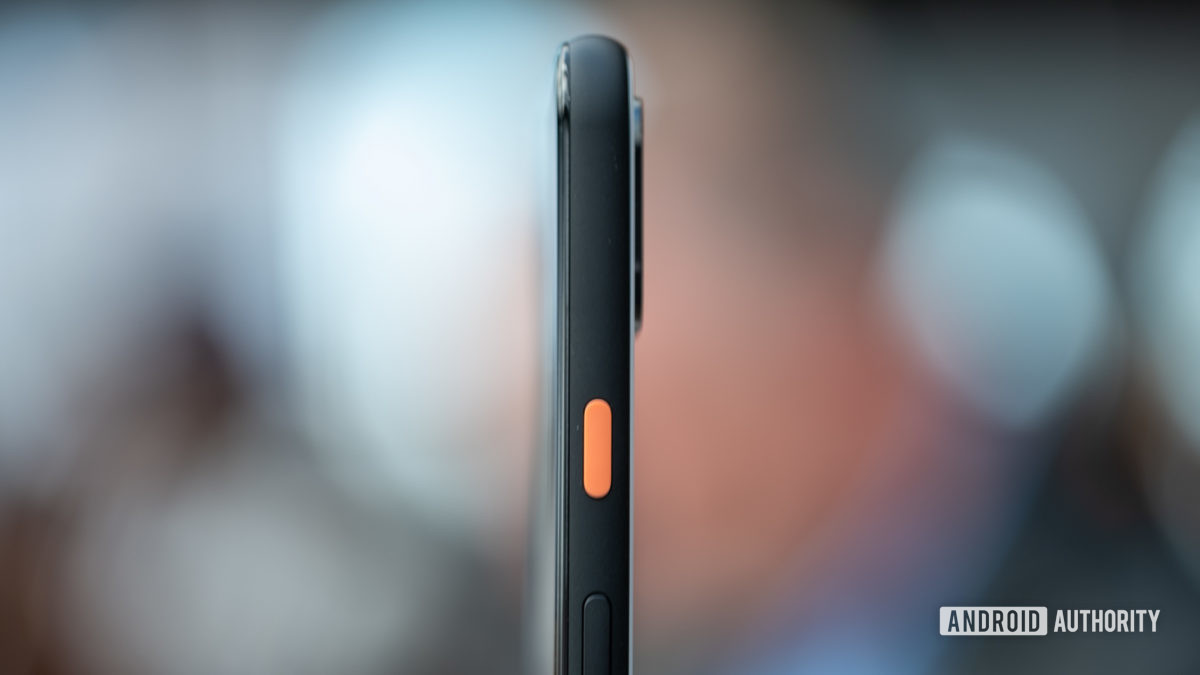 While the Pixel 4 and Pixel 4 XL may take a step away from the traditional Pixel dressage, I do think they maintain that “Google-y” look thanks to the simplicity of their lines. That may be a good thing or a bad thing, depending on your preferences.

The phones rate IP68 for protection against water and dirt. Google says don’t worry about getting them wet. They are made of glass, however, and a case such as this one from MNML might be a good idea.

If one thing stands out, it’s the camera module. Similar to the iPhone 11 Pro, Google tucked an elevated glass module in the upper-left corner of the rear panel. This module contains two lenses (telephoto, wide) and a flash. The module is black, even on the white and orange colorways. It’s not exactly attractive, but the module is much less physically pronounced than that of the iPhone 11 Pro.

The phone is pragmatic. It’s sensible without being sensational.

I am super happy to report that the heinous notch of the Pixel 3 XL is gone. Both versions of the Pixel 4 have a standard-shaped display, which is to say there are no notches, punch holes, or anything of that nature. The Pixel 4 series does, however, have a slight chin and forehead end-capping the screen.

https://www.youtube.com/watch?v=W-NXw3ojVhQ Android Authority’s Pixel 4 content is brought to you by MNML Case, makers of the world’s thinnest phone case. Save 25% on your Pixel 4 or Pixel 4 XL case using the discount code AAPixel4. Update: A …

Speaking of the screens, the Pixel 4 XL has a 6.3-inch display while the Pixel 4 has a 5.7-inch display. Both are AMOLED panels with Quad HD+ and Full HD+ resolutions, respectively. In our time with the phones today, we’d say the screens are color-rich, sharp, and accurate.

The rest of the hardware carries over features that we expect to see on a modern smartphone. Well, most anyway. There’s no headphone jack.

As Qualcomm exec Cristiano Amon was so excited to point out via Twitter a day early, the Pixel 4 and Pixel 4 XL have the Qualcomm Snapdragon 855 processor under the hood. It’s a bit disappointing that Google didn’t opt for the 855 Plus, which is revved up a bit, but there’s no denying that the 855 is a powerhouse of a chip.

Thankfully, Google boosted the RAM this year from 4GB to 6GB. Given the memory management issues suffered by the Pixel 3, this is a helpful improvement. Google is offering two storage configurations, 64GB and 128GB, the latter of which will cost you an extra $100. This is pretty stingy. Other than Apple’s iPhone, which also starts at 64GB, nearly all Android flagships include 128GB out of the box. Worse, there’s no memory card storage on the Pixel 4 series. Disappointing, Google.

Hopefully battery life is better. The phones’ lithium-ion batteries have capacities of 2,800mAh and 3,700mAh for the 4 and 4 XL, respectively. Google says this is more than enough to get through a full day, but every phone maker makes the same promise — and gives their phones hundreds mAh more in capacity. For example, the Samsung Galaxy Note 10 Plus has a 4,500mAh battery, which puts the 4 XL’s to shame. We’ll leave it to our real-world and objective testing to see how the Pixel 4 series really performs.

Google has set the bar for mobile photography three years running and this year it looks to keep its lead. While Apple, Huawei, LG, Samsung, and others have adopted three- and even four-camera arrays, Google is moving from its single camera setup to a dual-camera setup. The main sensor is 12MP, while the second sensor is 16MP. But, as Google explained, it’s not about the megapixels.

Google brought up one of its camera engineers to go over the additions to the camera this year, which focused on a few things.

First up, Live HDR+. This tool will present a more accurate representation of what the resulting image will look like as people compose their shot. Further, it adds brightness and shadow sliders so people can tweak their photos for creative effect before firing the shot. Neat.

The Pixel 4 series still maxes out at 4K video at 30fps.

Next, Google refined its portrait mode. Using the phone’s two cameras, Google is better able to compute in three dimensions. This helps portrait mode provide more separation between the subject and the background, as well as create cleaner edges around human hair and dog fur.

Then there’s Night Sight. Google has taken night mode to the extreme. The phone is good enough at seeing in the dark that it can literally be used to take pictures of the stars. It does this by capturing 15 different images and blending them together. The results shared on stage looked impressive, though we look forward to testing this ourselves.

Last, white balance. Google is performing more calculations in the background to properly assess color. This will help avoid the blue or yellow tint that some photos take on depending on the ambient light.

Good stuff, all, but the Pixel 4 series still maxes out at 4K video at 30fps. Disappointing that Google didn’t push that to 4K at 60fps.

Google is shipping the Pixel 4 and Pixel 4 XL with Android 10, the latest version of its mobile platform. As it does every year, Google bestowed several Pixel-only features on these devices.

First up is Motion Sense. This relies on miniaturized radar tech from Soli to register the motion of your hand. It allows people to wake the phone, silence calls and alarms, or skip music tracks with a wave of their hand. We’ve seen this type of feature before, and the in-person demo was saw was flaky at best.

The Pixel 4 ships with the new Google Assistant. Powered in part by the Pixel Neural Core, the Pixel 4 series is able to perform far more voice actions when not connected to the internet. Google said it developed a special version of Assistant for the Pixel 4 that is able to control on-device apps, tasks, and more. We saw Google employees quick switch from app to app, as well as issue follow-up requests almost immediately. Good stuff.

A new voice recorder app can not only transcribe text in real time, it is fully searchable. Very slick.

Last is the upgraded face unlock tool. Google still uses the camera to recognize your face, but it relies on the Motion Sense radar module to know when you’re holding or looking at the phone. It also fully encrypts face ID data and keeps it locked on the Titan M chip. This is good news for those who are keen on privacy.

In a year during which its competitors upped the hardware ante with sleek slabs, Google is sticking to the most simple. The Pixel 4 is boring, and that’s the point. The company said quite plainly that it wants hardware to drop away from the experience and allow people to focus on what they can accomplish. The Pixel 4 does that. It’s a bare-bones-looking piece of hardware that basically serves as a wrapper for Google Assistant.

In this sense, the phone is pragmatic. It’s sensible without being sensational.

Where the Nexus line from Google focused on providing a good experience at an affordable price point, the Pixel line has steadily increased its price point to match the flagship competition. In other words, don’t expect the Google Pixel 4 and Pixel 4 XL to come cheap.

The Pixel is more available than ever thanks to new carrier deals. The Pixel is compatible with and will be sold by all the major carriers in the US. That’s good news for Google and for US consumers. Google of course is also selling the phone unlocked.

This concludes our Google Pixel 4 hands on. What do you think? Are you impressed? Nonplussed? Be sure to let us know.

Are you buying the Pixel 4, Pixel 4 XL, or neither? (Poll of the Week)

Google Pixel 4 and Pixel 4 XL are here: Everything you need to know

Ivacy VPN deal: The fastest VPN of 2019 is now one of the cheapest

Smartphone stills are getting so much better, but what about video?