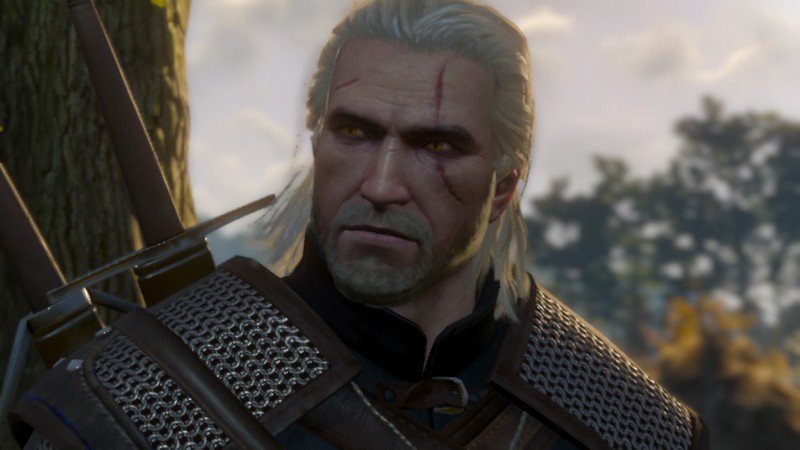 Take your Witcher quests with you wherever you go.

After several months of waiting, the Witcher 3: Wild Hunt finally made its way onto the Nintendo Switch. The game originally released in 2015 and has already been on all of the other main platforms including PS4, Xbox One, and PC. It was such a popular game that it won over 250 Game of the Year awards. As the name implies, this is the third game in the series and continues the story where the sequel left off.

You take on the role of Geralt of Rivia, a mercenary who uses magic, swords, and quick thinking to get himself out of tough situations while also adding coins to his purse. The Witcher 3 has Geralt searching for his adoptive daughter, Ciri, who is a witcher like himself. War and terrible monsters plague the land. It’s up to you to decide what quests to take and what political situations to get entangled in.

Due to the lower graphics abilities of the Switch, many have criticized the visuals of this version. As you can tell from screenshots, the look of the game definitely isn’t ideal on the Switch, however, the trade-off is that you can play this game anywhere you go. I’ve been testing this Switch version for roughly 30 hours to evaluate how smoothly the game runs on the hybrid gaming system. Here’s my review of The Witcher 3: Wild Hunt – Complete Edition for Nintendo Switch.

More: Everything you need to know about The Witcher 3 on Switch 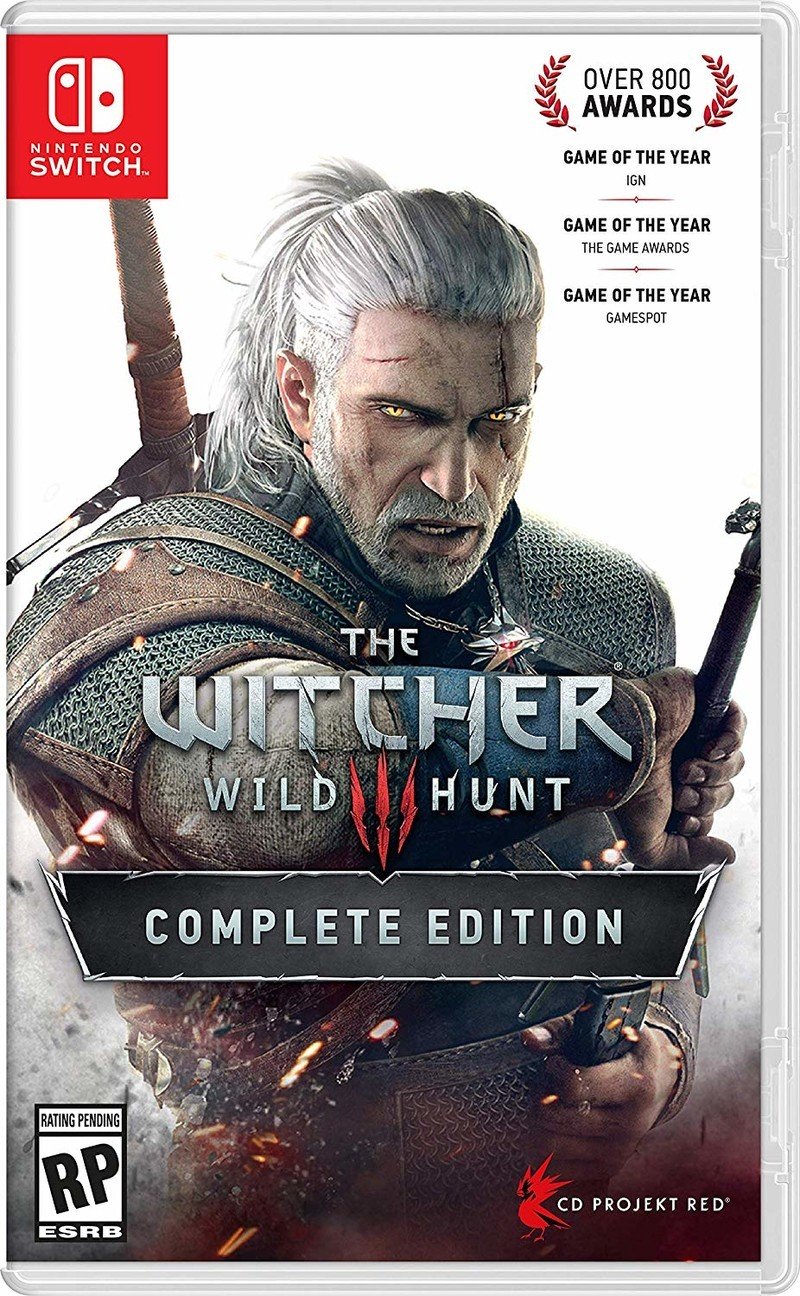 Bottom line: The Nintendo Switch version of The Witcher 3 exchanges high-resolution graphics for portability. It runs well on the Switch and is an amazing RPG for anyone who loves magic and fantasy. I recommend it for anyone who’s looking for a quality game to play on the go.

One of the best RPGs of all time 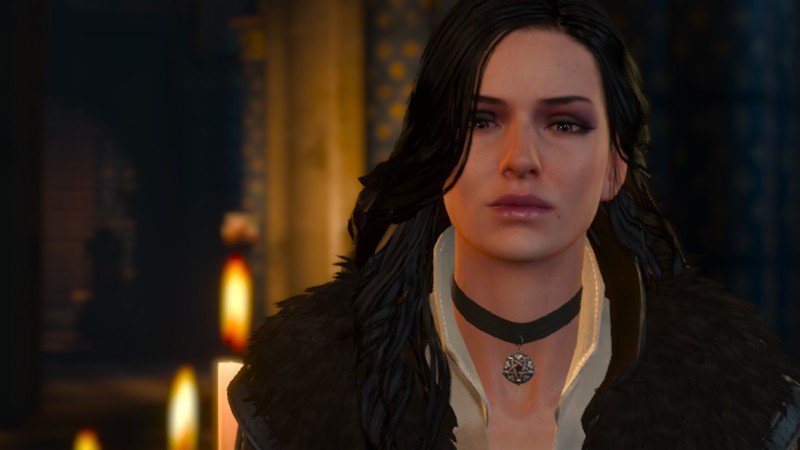 Fun to play on Switch Portability and relatively smooth gameplay

I didn’t notice any frustrating lag during combat, exploration, or when galloping on my steed.

There are three main things that set the Switch version of The Witcher 3 (or the Switcher) apart from other platform versions: It includes all of the DLC previously released in other formats, the visuals aren’t as good, and you have the ability to play on the go. While testing, I divided my time equally between playing on the go in handheld mode and playing in docked mode on my TV.

At a max of 30 frames per second in both handheld and docked modes, the game doesn’t run quite as smoothly as it does on other consoles, however, it worked well enough to not cause me any problems. Load times weren’t ridiculously long and I didn’t notice any destructive lag interrupting combat, exploration, or galloping on my steed. Admittedly, the frame rate is all over the charts depending on where you are in the game, but it didn’t negatively impact me like I had expected it would. The times when I did notice some lag was mainly during cutscenes.

Something I did notice is that this is one of the games that eats away at your Switch battery faster than many others, much like The Legend of Zelda: Breath of the Wild. For this reason, you’ll probably want to bring a portable battery along with you if you intend to play in handheld mode.

One of the reasons Witcher 3 was such a big hit on other platforms is because it’s an amazing RPG. There are several skills and menus that you need to master in order to really get this game. Throughout the course of the story, you need to increase your magical abilities, master sword fighting, learn to beat others in a card game called Gwent, become a decent blacksmith, and learn to make potions effectively if you want to get far. While these activities all take some skill, they aren’t overly complicated. It really makes you feel like the things you do in this game are won by your skill instead of simply being handed to you.

The Witcher 3 offers a rich fantasy world filled with plenty of activities and quests that take skill to effectively complete.

The number of activities you can participate in might feel overwhelming at first, but they are all real-life skills that would be necessary if you really lived in the Witcher’s fantasy world. The complex world combined with all of the activities you can participate in really make this the perfect game for anyone who’s grown up playing RPGs and wants a more challenging and fully-realized option from the genre.

If you haven’t played The Witcher before, you might feel a bit overwhelmed as tutorial after tutorial pops up on the screen, but you just need to give it some practice and soon you’ll have everything down. 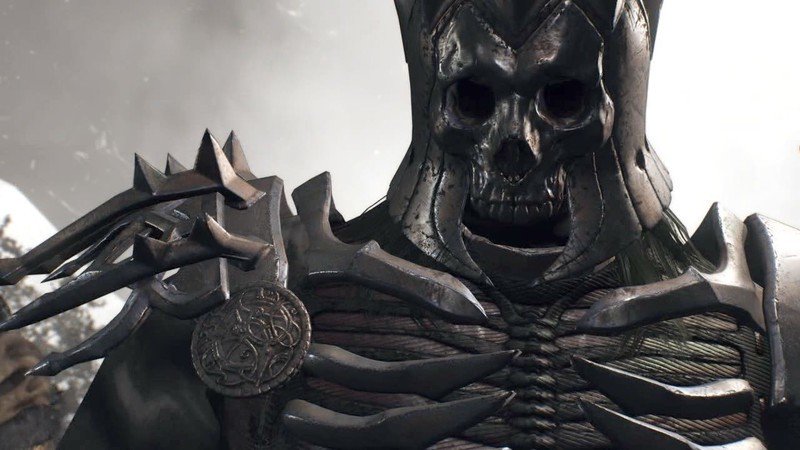 The Witcher 3 is one of those rare games that does an amazing job of making the world feel real while providing a genuinely intriguing plot filled with genuinely fascinating characters. Each individual has history and interacts beautifully with the others in the story. This depth isn’t too surprising given that the Witcher games were based on a series of books written by Polish fantasy writer, Andrzej Sapkowski. Though the game does deviate from the books in several ways, the book series gives the plot several complicated backstories to jump off from.

Additionally, the game often centers on morally and politically ambiguous events and pulls you in by having you decide what you should do. Will you be a merciless mercenary only out for yourself or will you be a kind-hearted traveler fighting the injustices of the people you meet? The choice is yours.

The extras The physical copy comes with goodies 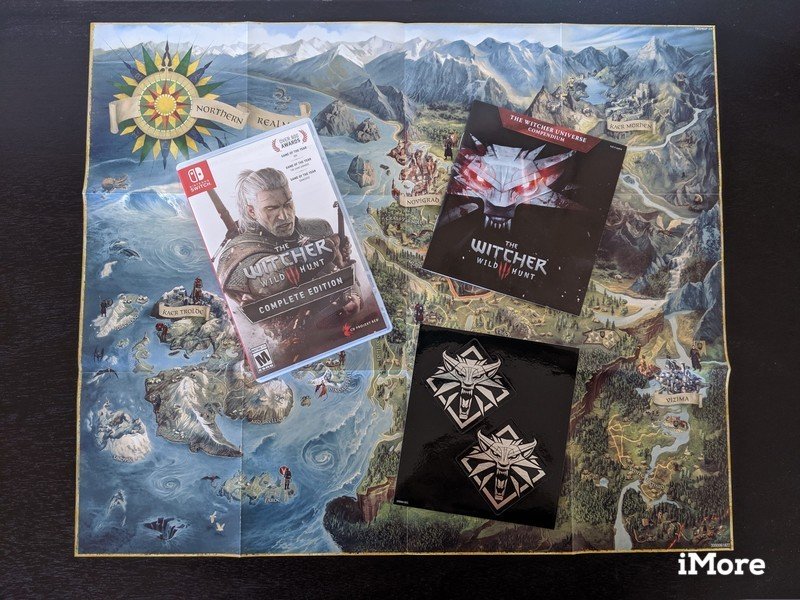 Those who buy the physical copy of The Witcher 3 for Switch receive two wolf stickers in the shape of Geralt’s medallion, The Witcher Universe Compendium, and a map of the Northern Realms. As you can see these stickers look awesome and add a cool feel to anything they’re applied to. The map is very detailed and features enemies and characters that you encounter in various areas.

The compendium is a great asset for any Switch owner who hasn’t played a Witcher game before or for any fans who need a refresher on the plot. It includes a brief history of the world, as well as, backstories for the main characters in Witcher 3. It also quickly catches you up to date on Geralt’s previous adventures so you can start playing and have a better understanding of what happened in the first two games.

If you’re wondering whether or not you can just jump into this third game without playing the other two, I’ll tell you it is possible. However, you might not understand all of the references or understand the complex relationships between characters as well. Fortunately, there are plenty of synopses online if you want a more in-depth understanding of the first games.

The Witcher III: Wild Hunt What I don’t like 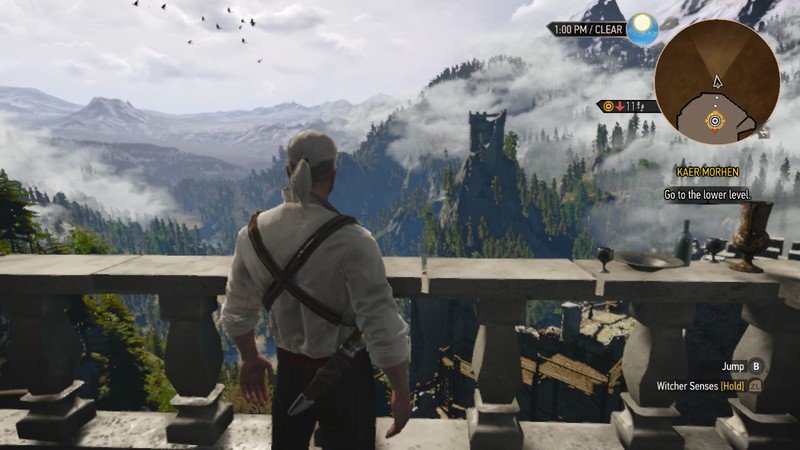 Visual downgrade Definitely not as pretty as other versions

There have been countless side-by-side comparisons of The Witcher 3 on Switch versus other platforms. The Nintendo version obviously doesn’t look nearly as pretty as the PS4, Xbox One, or PC copies of the game. Characters’ faces and hair are often blurry, textures aren’t rendered nearly as well, and the landscapes aren’t displayed in as much detail. This is really sad given that The Witcher 3 does offer some gorgeous landscapes, cutscenes, and character designs on other platforms. For this reason, I’d say it would be better for players to experience the game on a different platform, if possible. However, the trade-off for the Switch’s bad visuals is that you can play the game wherever you go.

Characters are often blurry, textures aren’t rendered nearly as well, and the landscapes aren’t displayed in as much detail.

I brought the Witcher 3 with me on a flight while I was testing it and it helped make time fly by super quickly. I was able to make a lot of progress and enjoy a complex RPG without being stuck to a TV. That’s something that none of the other versions of The Witcher 3 can currently do.

As previously mentioned, the game caps out at 30 fps in both docked and handheld mode, but it also dips down into the low 20s during complex or busy parts of the game. This didn’t really interrupt my gameplay like I expected it would. However, it did make certain cutscenes and busy cities lag quite a bit. If that’s something that’s going to bother you, then you should probably consider getting the game on another console. Still, while it wasn’t ideal, I do recommend the Switch version to anyone that wants it. 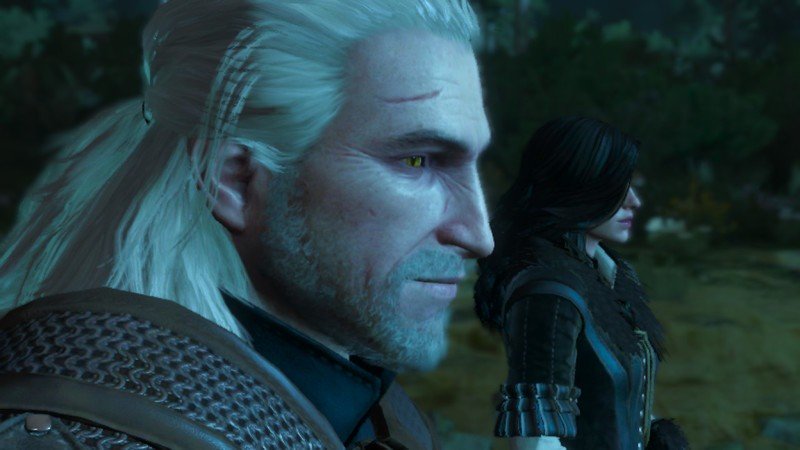 The Witcher 3: Wild Hunt – Complete Edition for Nintendo Switch definitely isn’t the prettiest version, but it’s still a great game to play regardless of the downgraded visuals. Anyone who hasn’t played a Witcher game before will find a rich fantasy world filled with complex characters and an intriguing plot. The battle mechanics and various activities require some skill to efficiently master, but that just makes the game more rewarding to play. I loved being able to play the game wherever I went, which is something I obviously couldn’t do with previous versions. I recommend this RPG to anyone who wants to have a fun, complex story they can play on the go.

Experience this fantasy world filled with magic, fantastical beasts, and epic combat. You’ll get several hours out of this game and find yourself drawn into the fascinating world.

The Nintendo Switch version of The Witcher 3 exchanges high-resolution graphics for portability. It runs well on the Switch and is an amazing RPG for anyone who loves magic and fantasy. I recommend it for anyone who’s looking for a quality game to play on the go.

Get the Apple Watch Sport Band look for less

Improve your Apple TV gaming experience with this gaming Controller!

Need a reason to invest in HomeKit? Get a pet 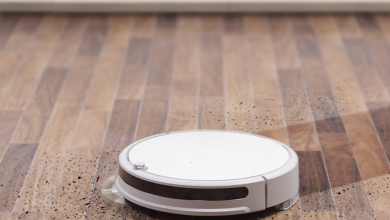