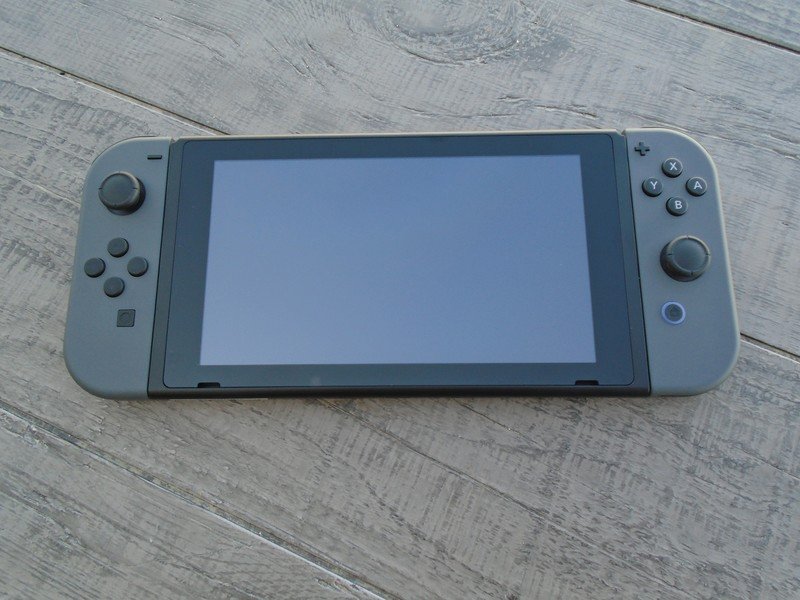 Nintendo’s updated version of the Switch, or the Switch V2 as some retailers refer to it, started showing up on store shelves in early August. We were curious to get our hands on the new device to see how it compared with the original, so we went out and bought a Switch V2 as soon as possible.

If you place the original Nintendo Switch and the new Nintendo Switch model side by side, it’s almost impossible to tell the differences between the two units without looking at model numbers. They look almost identical to each other and operate almost exactly the same. The big difference is that the new model lets you play up to nine hours, a vast improvement from the original’s ability to only reach up to six and a half hours. Curious to know what other differences there are? Here’s what we found. 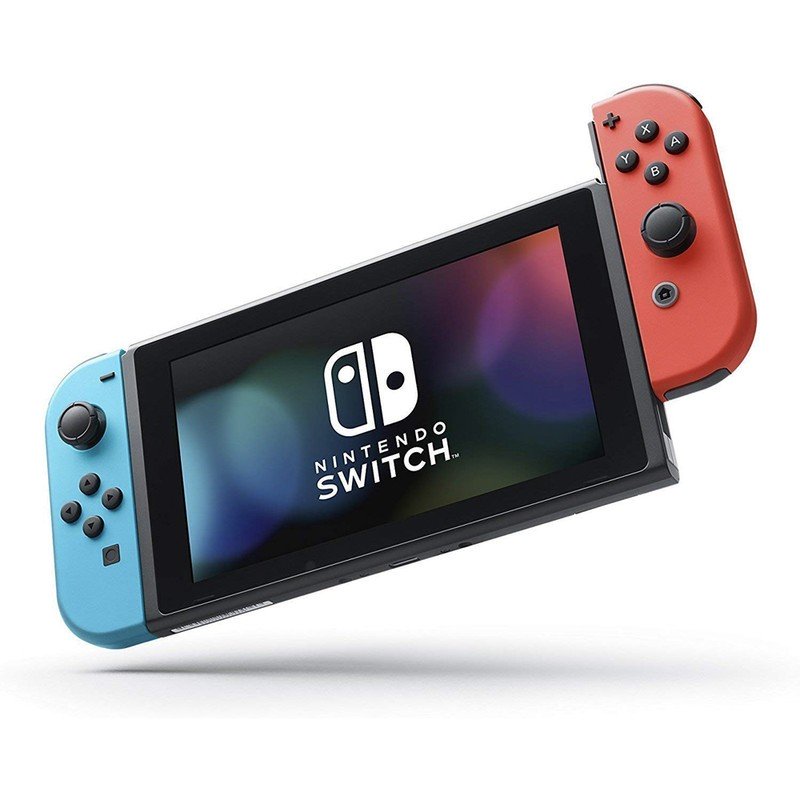 The Nintendo Switch allows you to play your favorite games on TV, in handheld mode, or in tabletop mode. There are thousands of games for you to play ranging anywhere from kid-friendly multiplayers to intense action RPGs. Take it with you and play it on-the-go.

Is the new model designed differently from the original? 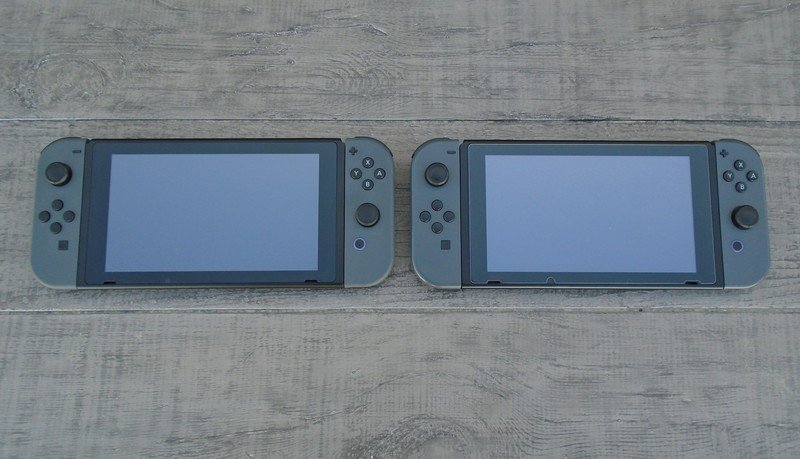 Outwardly, the only difference aside from the new model number was the fresh look of the Joy-Cons and main console. I’ve used my original Switch for hundreds if not thousands of hours, so it looks a little worn down in comparison.

If you were to remove the shell around the main console and compare the interior with the original Switch, you’d see some slight changes, but it’s the same for the most part. The biggest changes take place with the system-on-chip (SoC) and the NAND memory or flash storage. However, I didn’t notice a significant change in loading times or gameplay while I was using the new Switch.

Are the screens different? 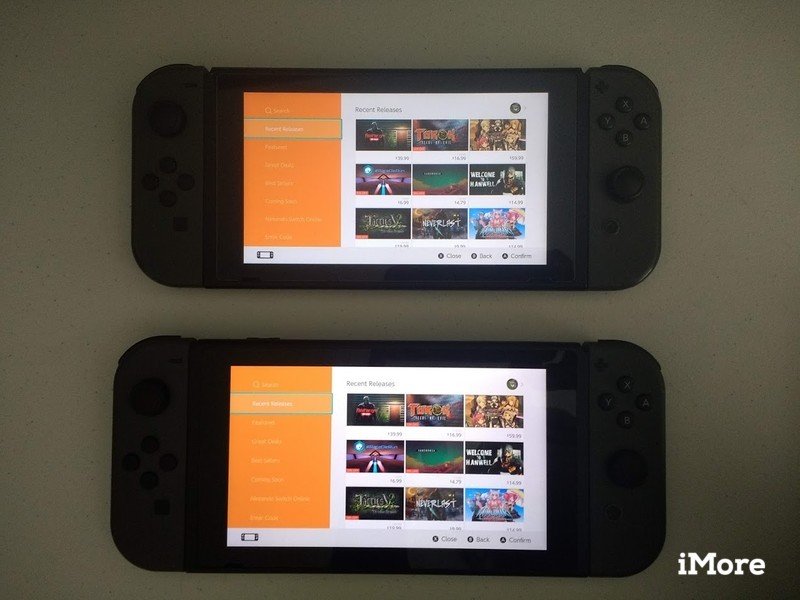 Now that it’s been revealed that Sharp is working with Nintendo to produce new Switch panels, I was curious to see if the screen on the new Switch included any of Sharp’s technology. I placed my original console and the Switch V2 side by side and brought up the same screens. From what I could see it looks like the new Switch V2’s screen is slightly brighter and gives off more of a warm color than the original’s screen. It’s really not that noticeable, though. Otherwise, the resolution between the two devices appeared to be the same. Additionally, when we opened the console up, we didn’t find a Sharp logo anywhere. I’m pretty confident in saying that Sharp’s upgraded panels are for a future device and not this one, but I don’t know for sure.

As far as my gaming experience went, the games loaded about the same on either Switch. Honestly, the only big difference I noticed was how much longer I could play the new model for.

How long does the battery actually last? 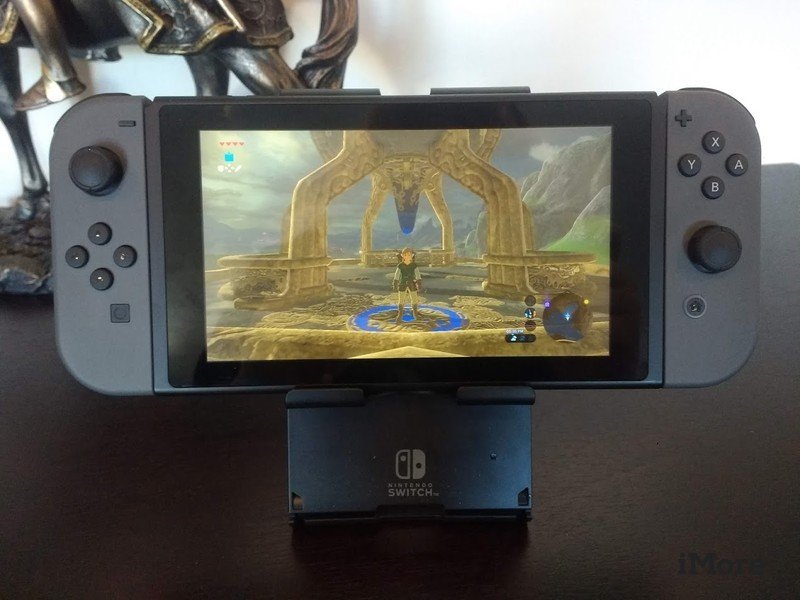 I wanted to see just how accurate Nintendo’s claims were, so I grabbed both my original Switch and the new model and then played one after the other. I set them to the same brightness settings and turned on airplane mode on either device. True to Nintendo’s claim, I was able to play Legend of Zelda: Breath of the Wild for roughly three hours on my original Switch and almost exactly five and a half hours on the shiny new model. I’ll tell you, those extra two and a half hours of playtime with the new Switch allowed me to do quite a bit more towards saving Hyrule before the battery called it quits.

Are the Joy-Cons different?

If you remove the shell from the new model’s Joy-Cons and look inside, you’ll see a few changes. For one thing, the antenna has been moved to a new location, which should prevent connectivity issues experienced with older models. I’m really happy about this change considering that my original Switch’s left Joy-Con disconnects all the time. In the 30 hours that I spent interacting with the new Switch, I never once had a connectivity issue with the controllers.

I happen to have both a set of original gray Joy-Cons and a set of the original neon red and neon blue Joy-Cons. I compared them to the new grey Joy-Cons. All of the left Joy-Cons have the same model number of HAC-015 while the right Joy-Cons all say HAC-016. However, there is a second number that changes between each of the three Joy-Con sets. 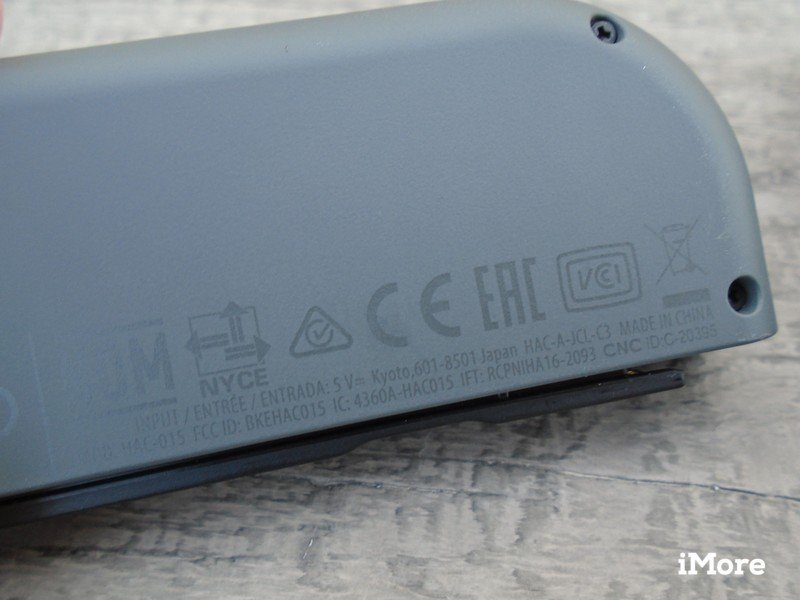 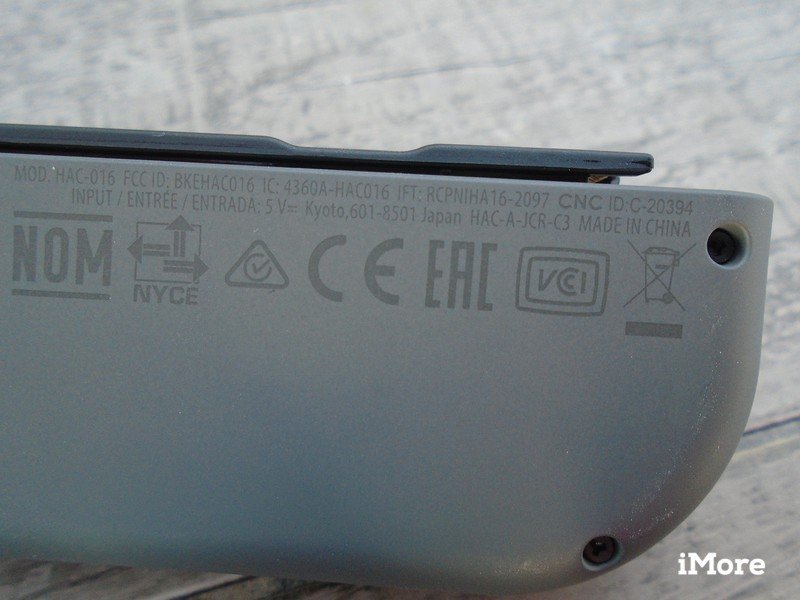 Do the Switch V2’s Joy-Cons still have controller drift issues?

Unfortunately, there have been reported cases of controller drift with the new Switch V2. It makes sense given that when we opened up the new Joy-Cons and looked around, the joysticks themselves didn’t seem to be much different from the originals. On that note, there have also been reports of joystick drift for the Nintendo Switch Lite as well, which doesn’t have removable Joy-Cons. If you experience drift issues on the smaller Switch, you’ll have to send in your entire gaming system to Nintendo for a repair instead of simply sending in a Joy-Con.

Should I get the new Switch V2 or the Switch Lite? 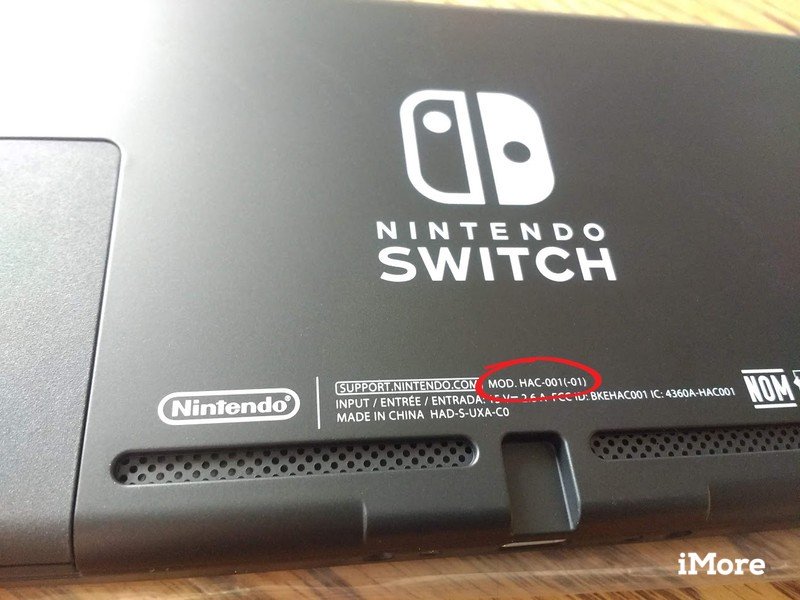 I have a few different feelings about this. First of all, if you haven’t bought a Switch yet, go for the larger console. The Switch Lite’s bright colors and smaller price tag are definitely appealing, but you’ll get more use out of the larger Switch. Plus, you’ll be able to play more Switch games. The improved battery life and hybrid abilities genuinely make the new Switch V2 worth buying.

Now, if you already own the original Switch and you like the idea of improved battery life consider investing in a portable battery rather than purchasing the new Switch. You’ll be able to play your gaming system longer on the go without dishing out another $300. Of course, if you’re experiencing severe connectivity issues with your Joy-Cons, getting the new Joy-Cons could help you out in that regard. Unfortunately, if you order Joy-Cons online, it will be hard to tell if you’re purchasing the new or old models.

How do I buy the new model and not the old one? 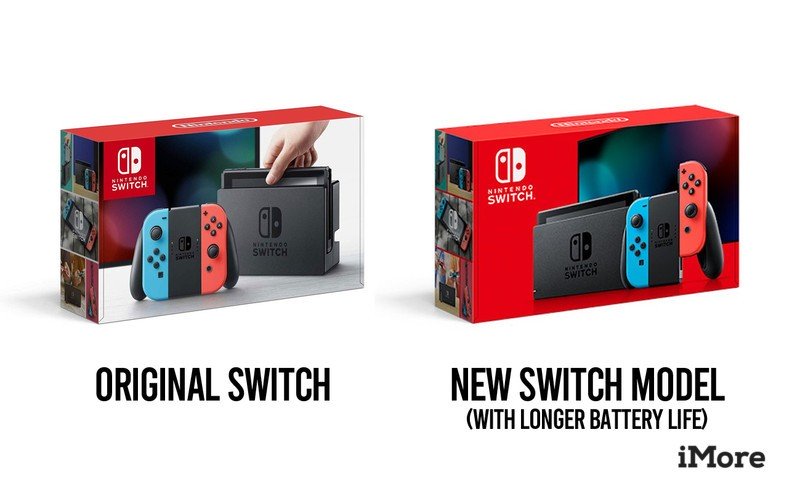 Back when the new Switch V2 released, I almost didn’t realize it was on store shelves. True to Nintendo style, the packaging design for the upgraded model is only subtly different from the original packaging. There’s nothing to make it obvious that it contains a newer version of Nintendo’s hardware. You’ll be looking for a Nintendo Switch box that features a red background. Additionally, when holding the Switch in your hands, if you check the model number on the back of the Switch, the new model number should read HAC-001 (-01), rather than the original’s number of simply HAC-001. Just be warned that it’s ridiculously difficult at present to tell if you’re purchasing the new or old Switch when shopping online.

The Nintendo Switch allows you to play your favorite games on TV, in handheld mode, or in tabletop mode. There are thousands of games for you to play ranging anywhere from kid-friendly multiplayers to intense action RPGs. Take it with you and play it on-the-go. 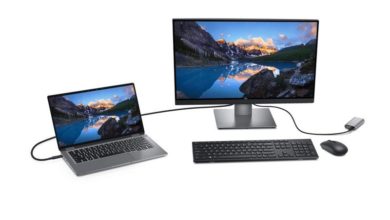 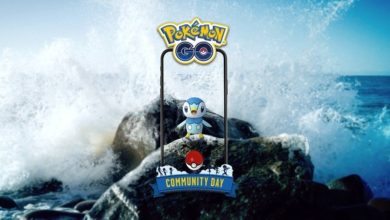 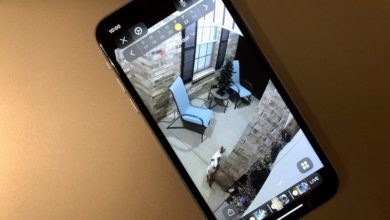 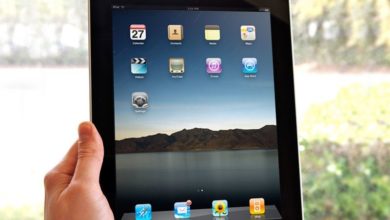 The Secret Origins of the iPad