Chromebooks are available at prices high and low. The $300 Lenovo Chromebook C340 sits in the sweet spot, balancing affordability with features and functionality. You’ll be hard-pressed to find as much bang for the buck as in the Chromebook C340, but Lenovo made a few choices that threaten to sink the entire experience.

Find out what they are in the Android Authority Lenovo Chromebook C340 review.

What is the Lenovo Chromebook C340? 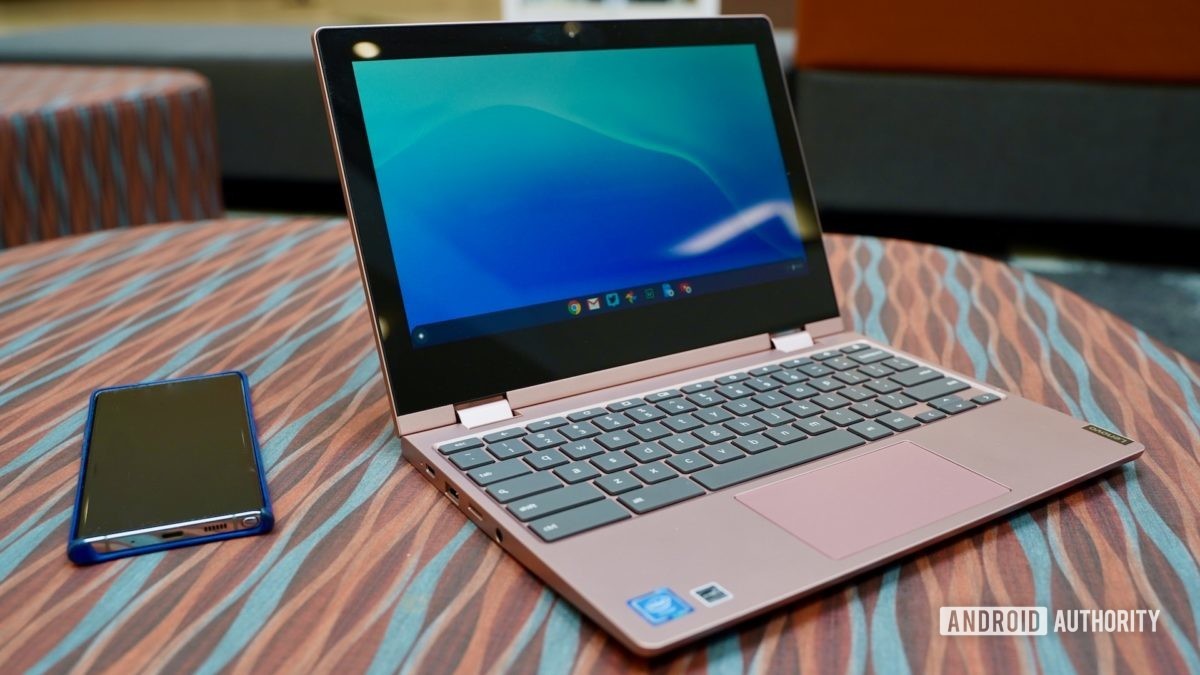 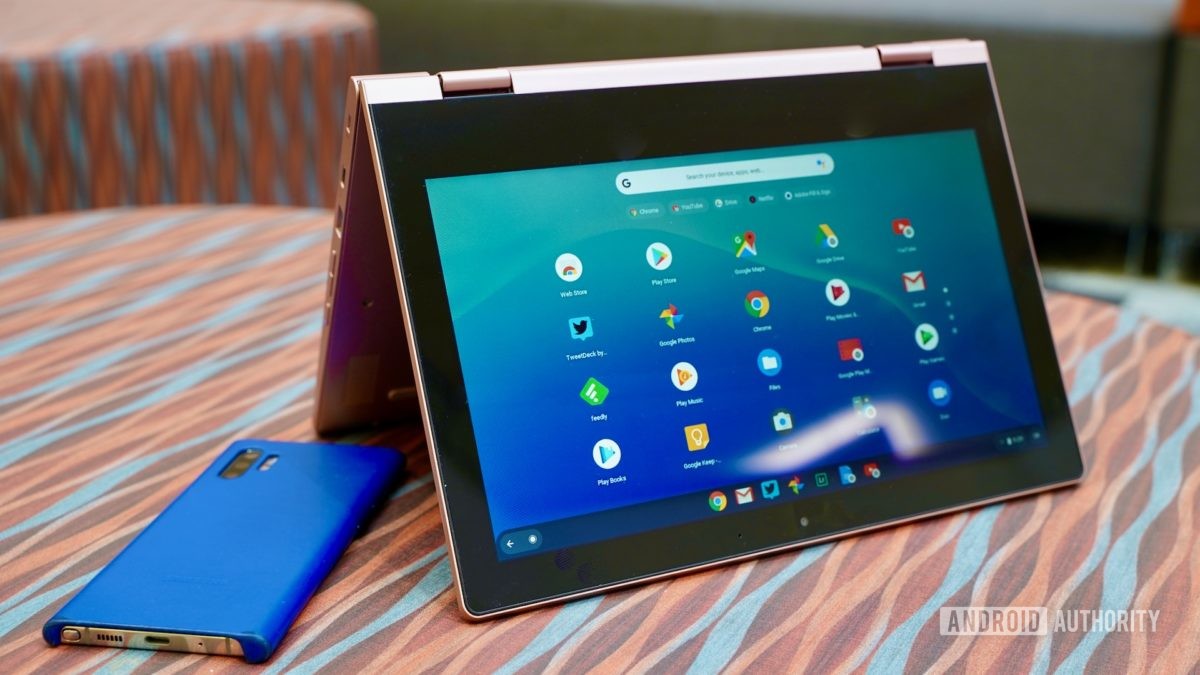 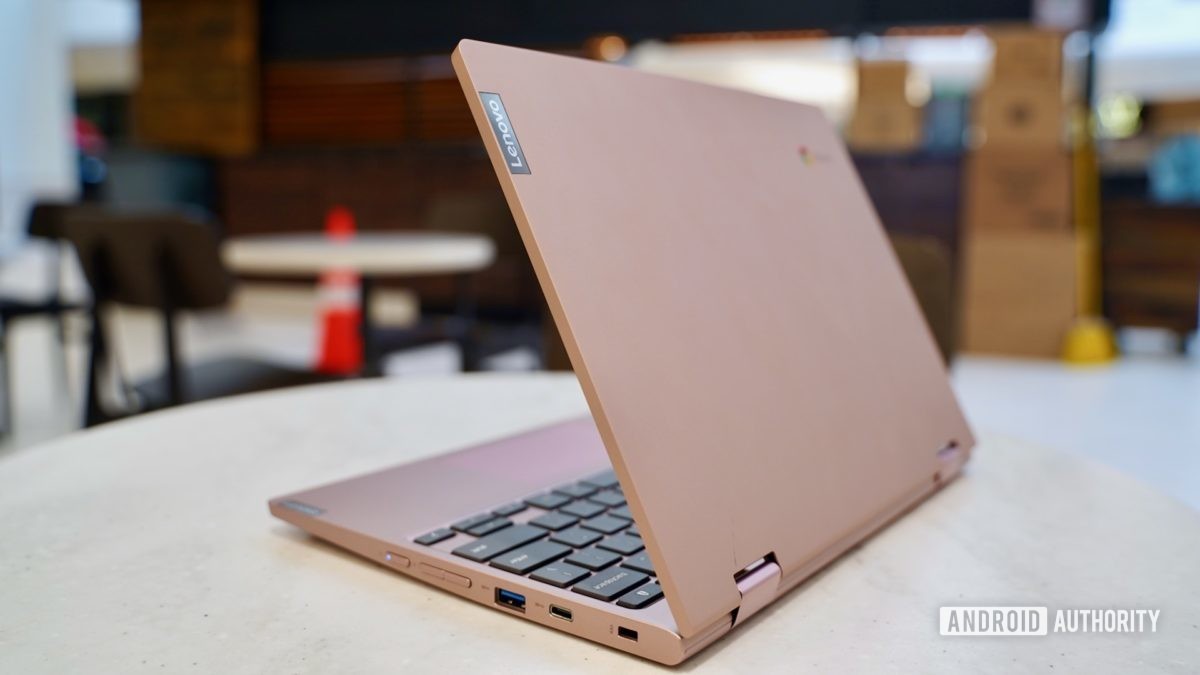 The C340 is a two-in-one convertible that works as a laptop or a tablet thanks to a hinge that swings 360 degrees. The 11-inch display means the C340 is compact, lightweight, and highly portable. Though Lenovo isn’t necessarily pitching it to the education market, I can see it serving as an effective machine for school-aged kids thanks to the size and weight.

A metal panel covers the Chromebook’s lid. It’s available in either Sand Pink or Platinum Grey. I like the matte, granular look of both finishes. The Chrome and Lenovo logos are embedded in the metal. Lenovo used plastic for the lower half of the Chromebook. Despite the differences inherent in metal and plastic, the color is uniform across both materials. 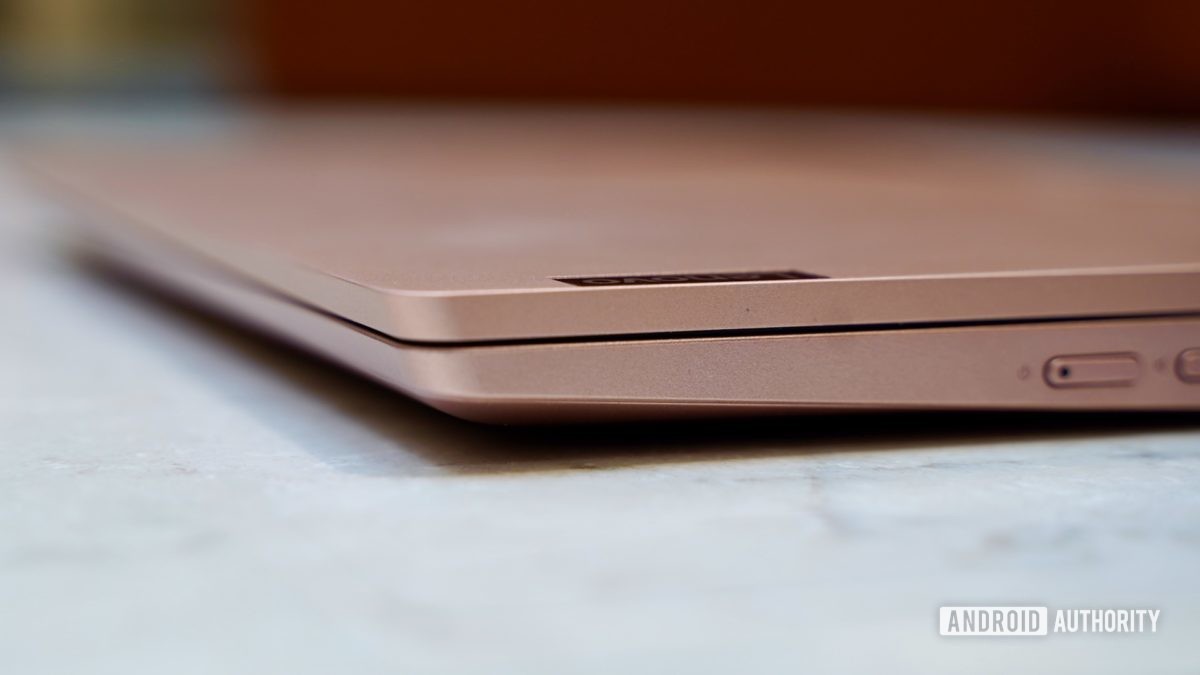 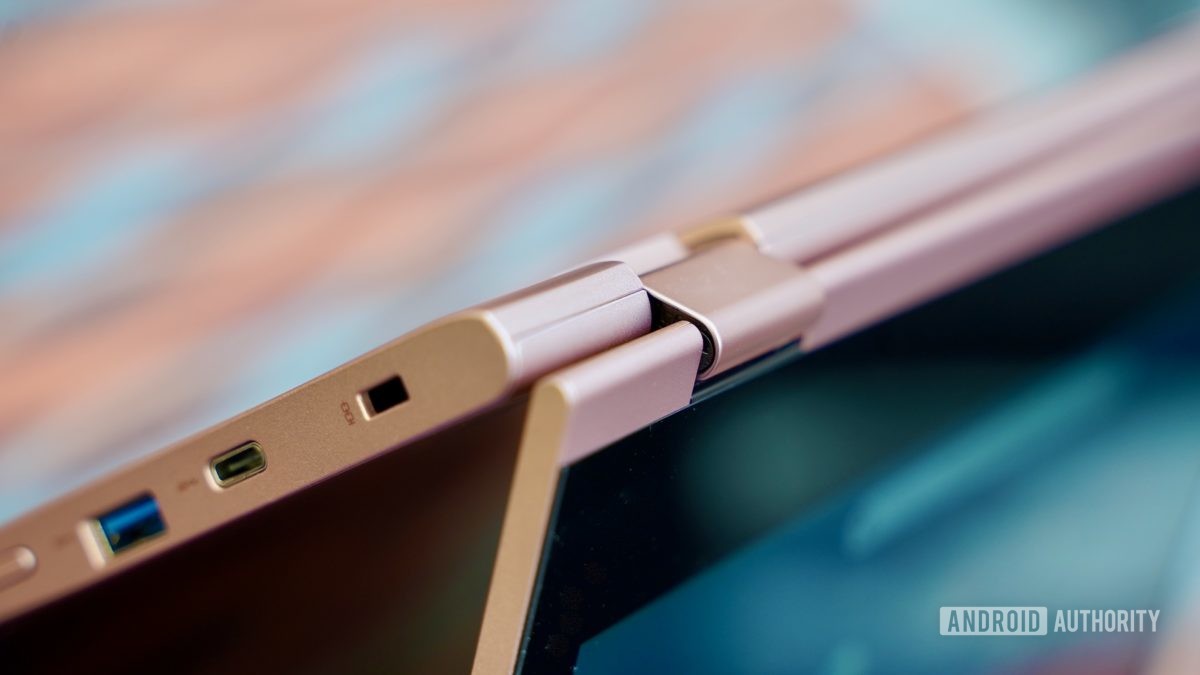 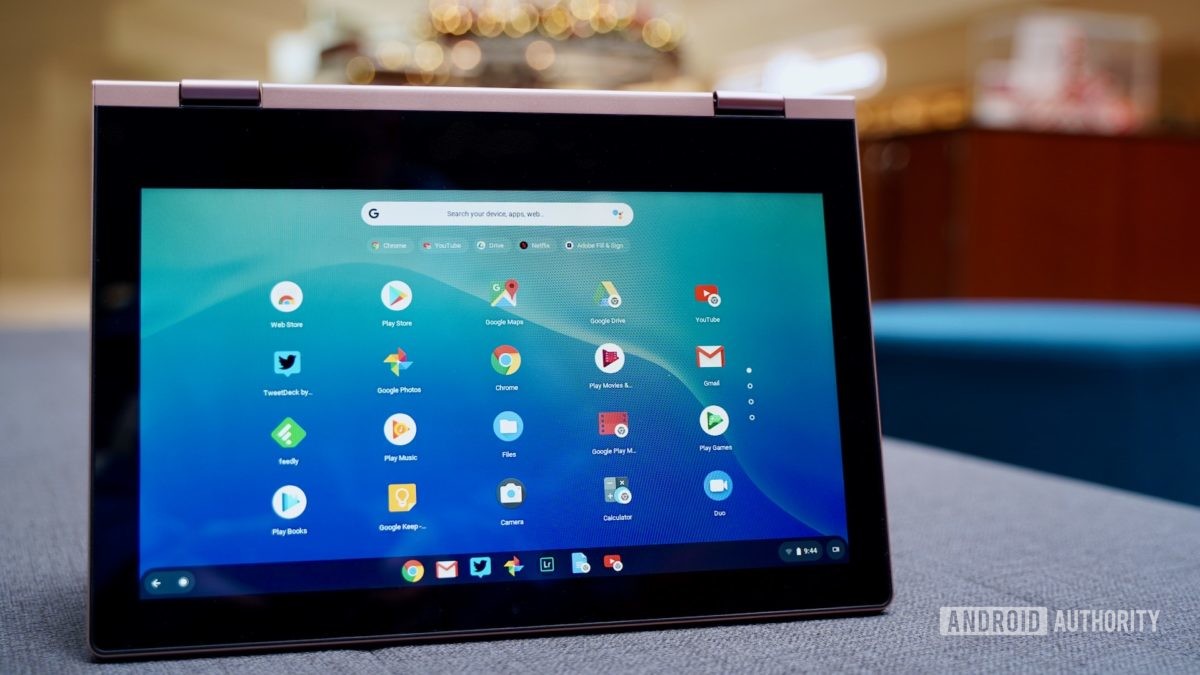 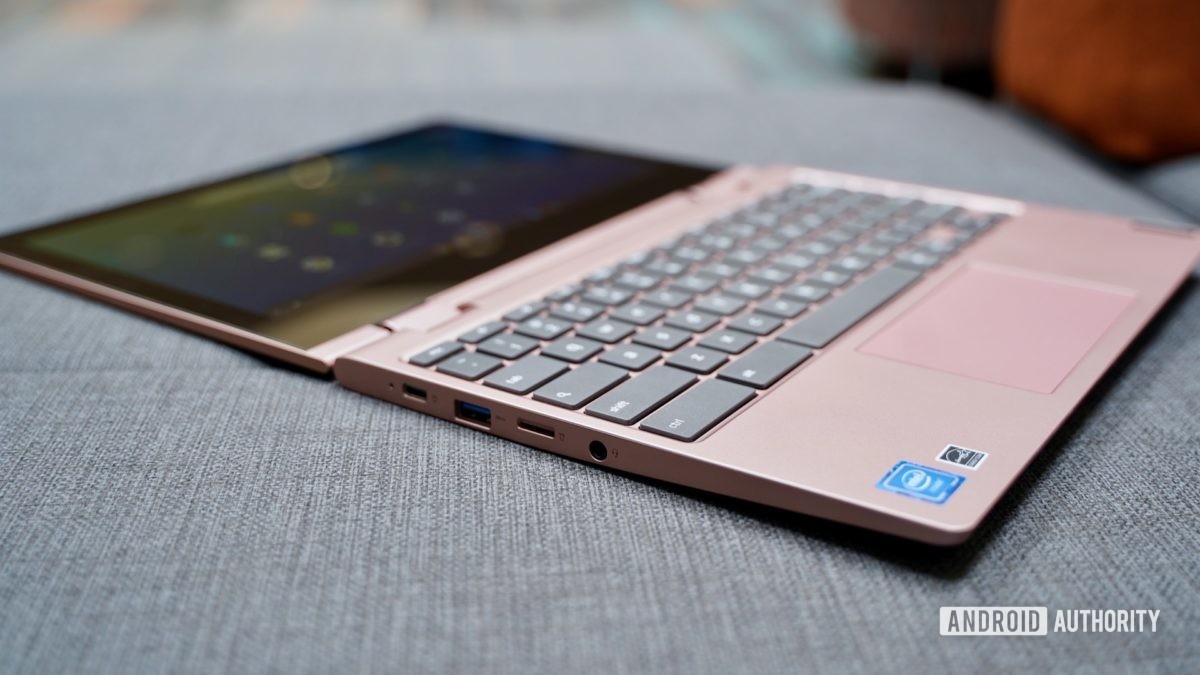 The hinge is strong and sturdy throughout the range of motion.

The overall shape is somewhat wedge-like. Both sides are tapered a bit from the rear hinge toward the front edge. The lid has what I’d call an angular overbite that forms a distinct profile for the Chromebook when it is closed.

Like many 360-degree hinges, the C340’s consists of two rotating hubs that allow the lid to swing all the way around and lay flat on the bottom. The hinge is strong and sturdy throughout the range of motion, and I felt confident setting the display at any angle. I particularly like to stand two-in-ones such as the C340 like a tent so I can watch YouTube or Netflix.

These are the Chromebook C340’s basic features.

How does the Chromebook C340 perform? 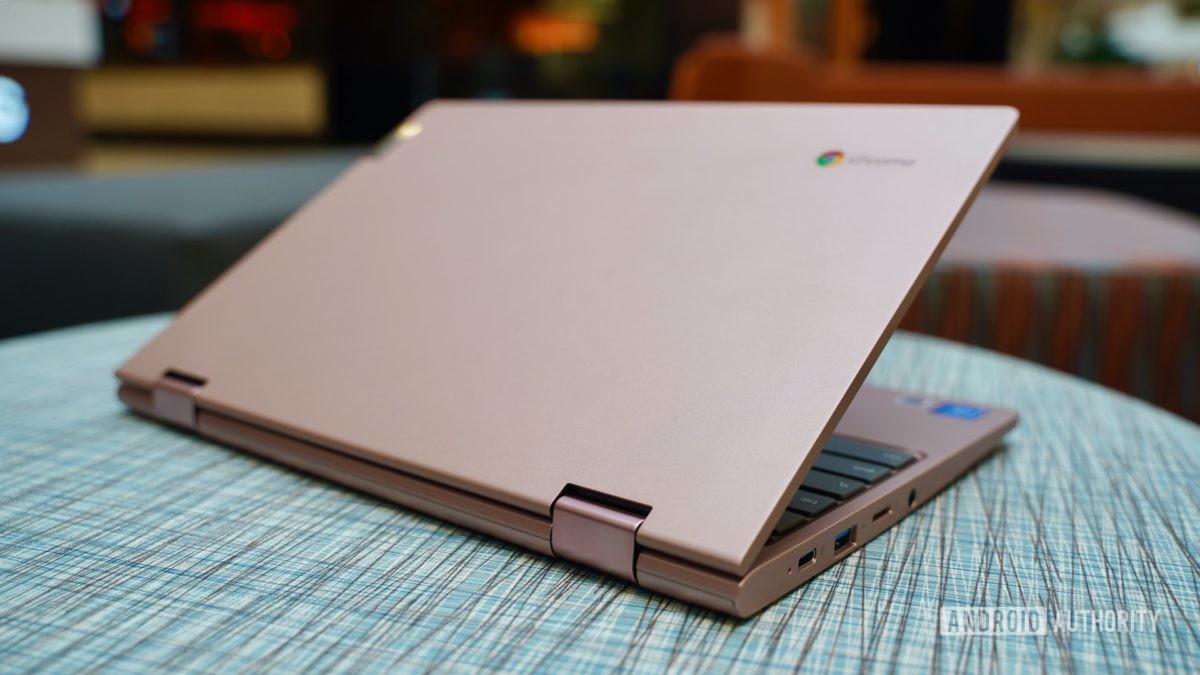 Pay for Celeron silicon, get Celeron speed — or the lack thereof. Only a single processor option is available to the C340, and that’s an Intel Celeron N4000 clocked at 1.1GHz with a 4MB cache and burst speeds of up to 2.6GHz. Other specs that play a role in performance include the Intel UHD Graphics 600 and 4GB of LPDDR4 RAM at 2.4GHz. Two storage variants are available: 32GB and 64GB, with only $20 separating the two options.

The N4000 marked its debut in 2017 and since then at least two generations of N4xxx chips from Intel have reached the market. It’s a low-cost processor for low-cost machines. I wish Lenovo had opted for a newer variant of the N4xxx line.

The C340 isn’t slow, per se, but it’s certainly not zippy. I found performance slowed noticeably once I reached the dozen-open-tabs mark in Chrome. Toss in some Androids apps running in the background and you’ll see responsiveness tumble. The C340 struggled to run Adobe Lightroom, for example, but Netflix, Spotify, and Google Docs all did fine. In other words, this is a light-duty machine, not a performant powerhouse.

9.5 hours of battery life is enough for a work or school day, but only if you’re shutting down at 6PM.

That goes for the battery, too. The three-cell, 42Wh battery takes several hours to recharge via the included 45Wh charger and will then run for up to 10 hours, according to Lenovo. Attaining that battery life depends on factors such as screen brightness and whether or not you’re blasting media through the speakers. Most days I tested the C340 it put up numbers between 9:12 and 9:28 — not quite 10, but enough for a work day or school day if you’re shutting down at 6PM. 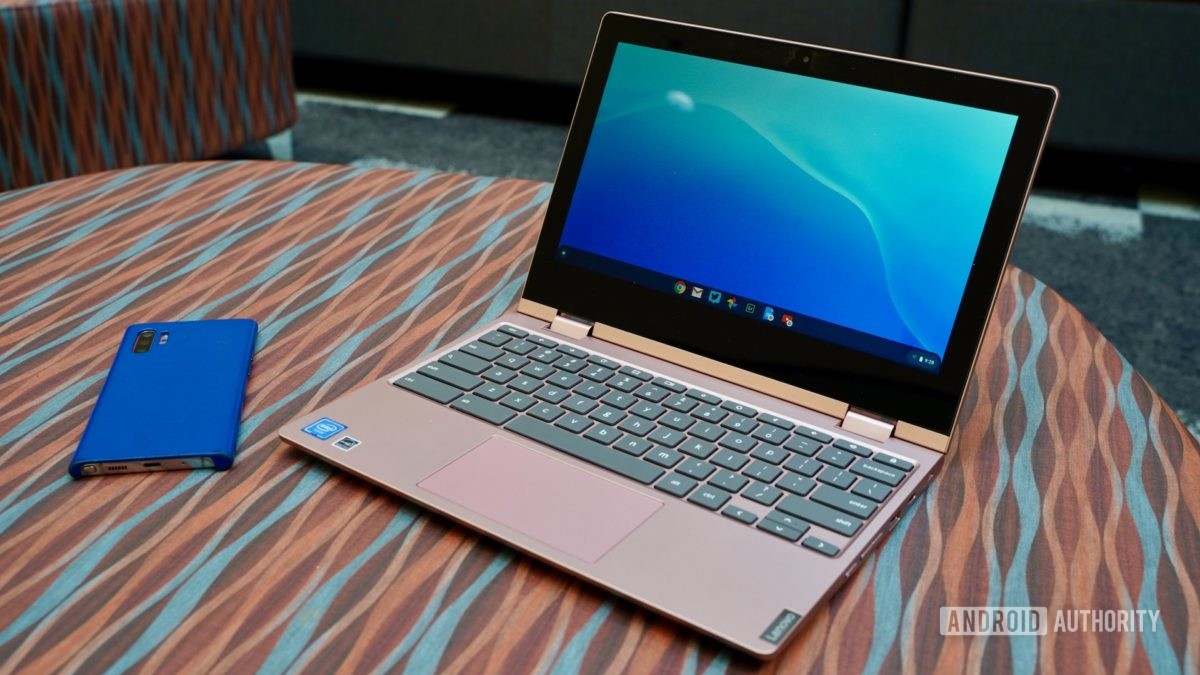 Wi-Fi and Bluetooth performed very well. The 802.11ac 2×2 configuration did wonderfully on my home Wi-Fi network, as well as the local Starbucks. No issues there at all. The same goes for the Bluetooth 4.2 radio, which was able to handle earbuds for wireless listening. 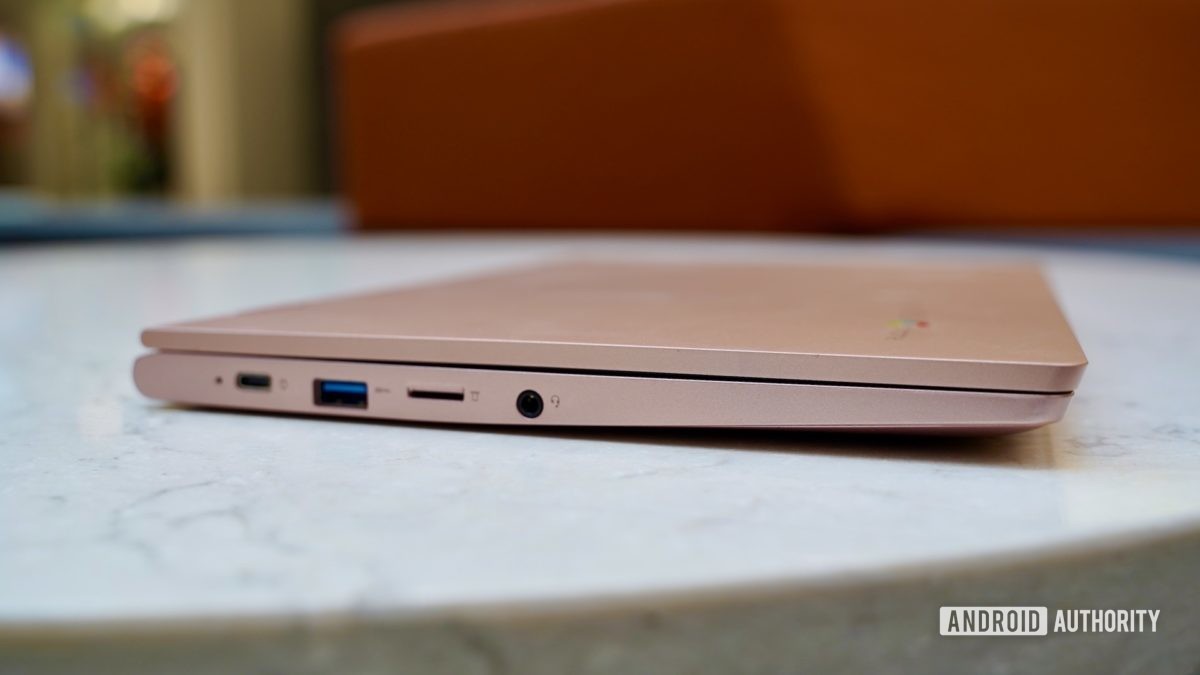 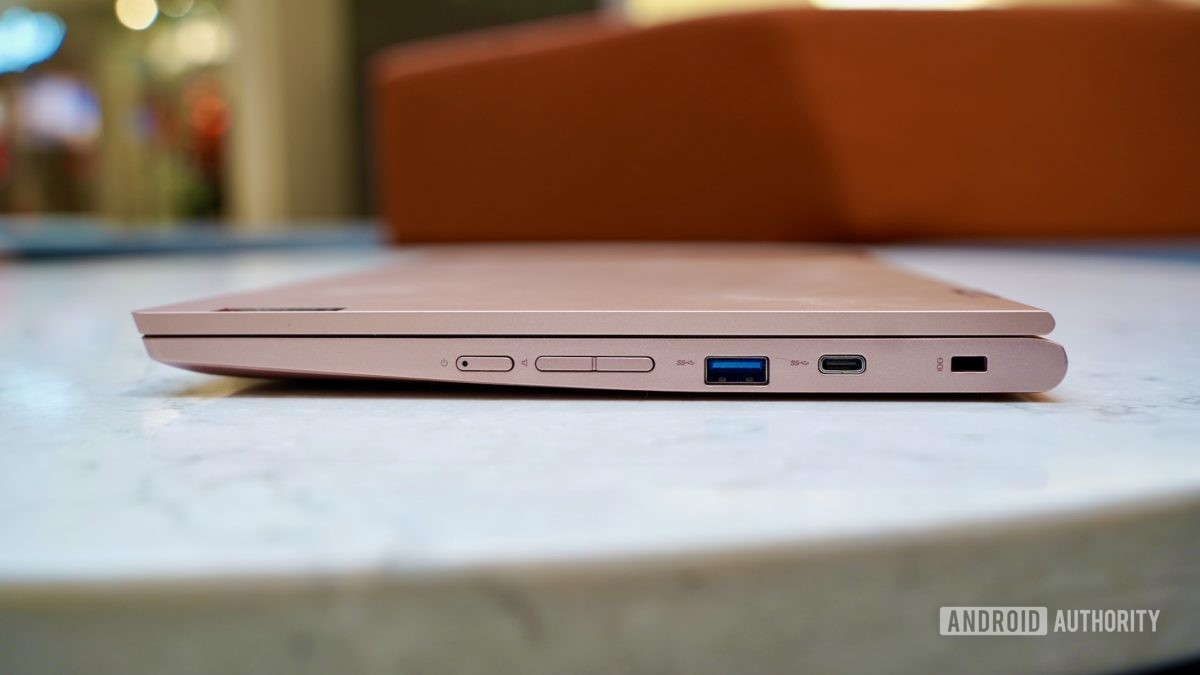 Lenovo’s affordable Chromebook C340 puts the more-than-twice-as-expensive Google Pixelbook Go to shame when it comes to ports. Where the Pixelbook Go has just two USB-C ports, the C340 has two USB-C ports (3.1 Gen 1), two USB-A ports (3.1 Gen 1), a headphone/mic jack, a Kensington lock, and a microSD card reader. Moreover, the ports and controls are spread evenly on both side edges of the C340, ensuring utility no matter your setting.

Another feature the C34o has that the Go doesn’t? Physical volume controls on the side edge, as well as an easy-to-find power button. A simple click of the button won’t shut down your machine. Instead, press-and-hold to bring up the shut down dialog box, which includes options for logging out and locking the Chromebook. These are simple hardware features that go a long way in aiding usability. 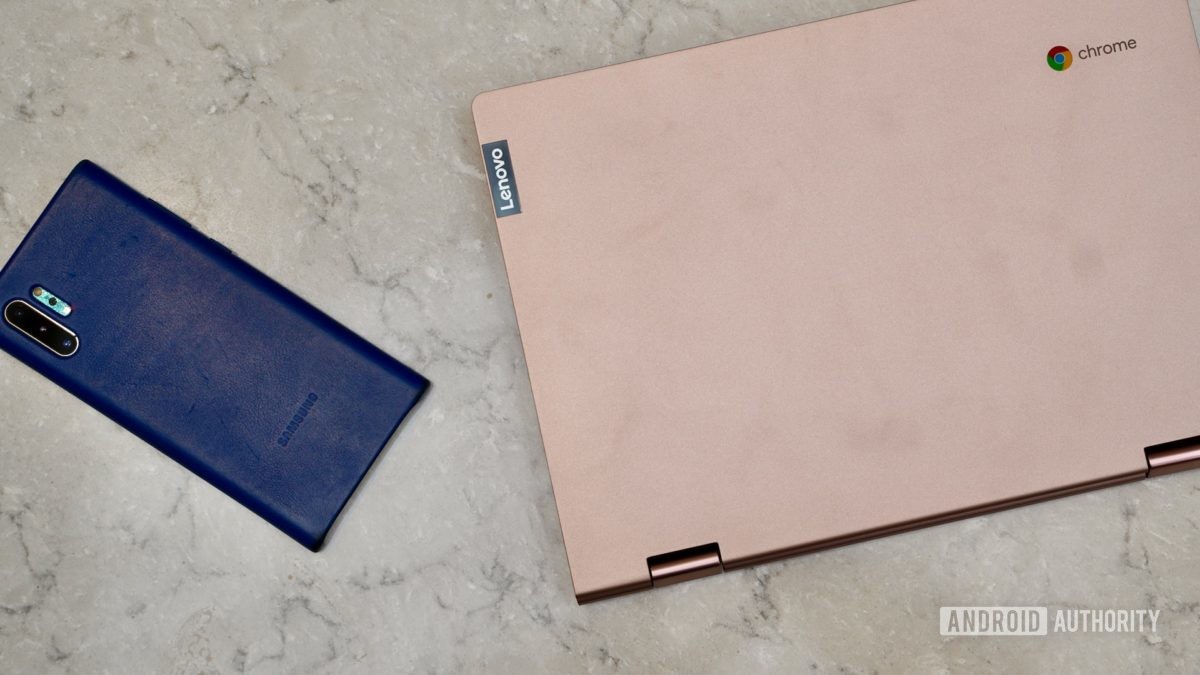 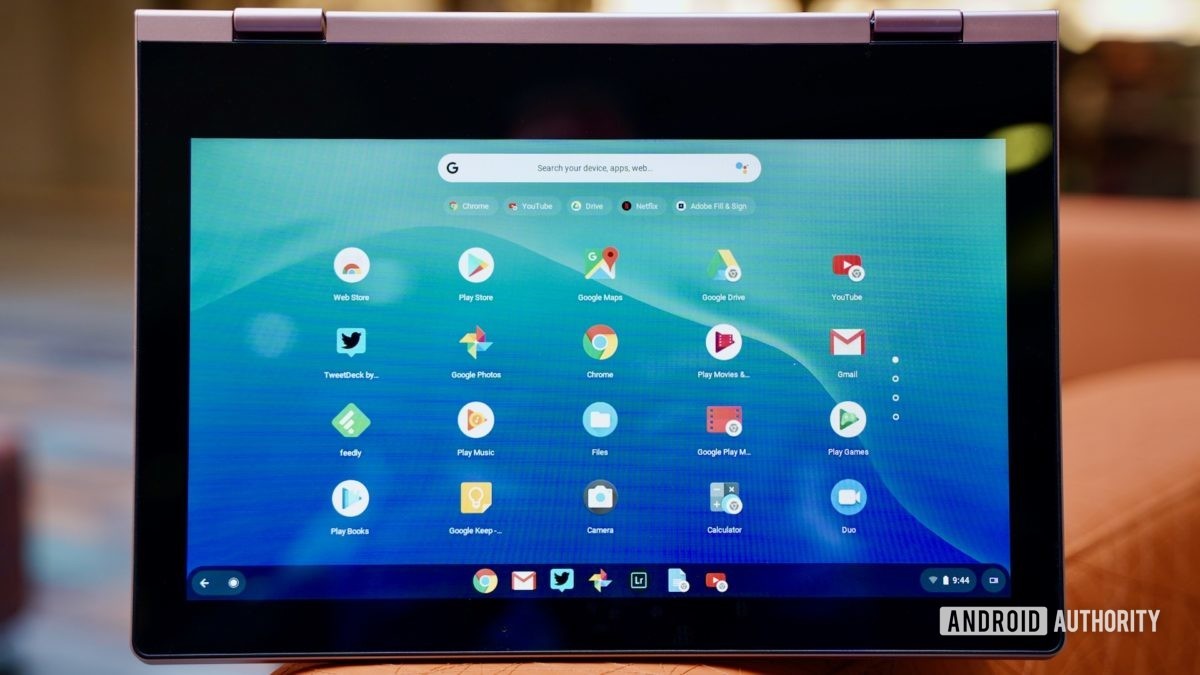 If you’re wondering why I haven’t yet mentioned the display, you’re about to find out why. The Lenovo Chromebook C340 has an 11.6-inch IPS LCD touch display with HD resolution (1,366 x 768) in a 16:9 aspect ratio. It puts out 250nits and is protected by a highly glossy piece of glass.

At this size, the HD resolution is just barely good enough. The screen is perhaps at its best when watching movies or TV shows. During these activities, you often lean back a little and video content moves quickly. Colors look good and viewing angles are excellent.

The Chromebook C340 has unappealing black bezels all the way around the display.

Leaning in to use the C340 to browse the web or to get some writing done is a different story. My eyes were able to spot pixelated edges on graphics, icons, and text. It’s not egregious, but it’s noticeable. The backlight isn’t quite powerful enough. Though 250nits isn’t terrible, I had trouble seeing the screen when using it in sunny spaces, such as my living room or near the window of a coffee shop. The high reflectivity of the glossy glass doesn’t help. Toss in fingerprints from touching the screen and it’s not the best experience I’ve had.

Then there are the bezels. The C340 has thick black bezels all the way around the display that are incredibly unappealing. Convertible two-in-ones do necessitate that there be at least some bezel to add an area to grip when used as a tablet, but the C340 simply has too much. 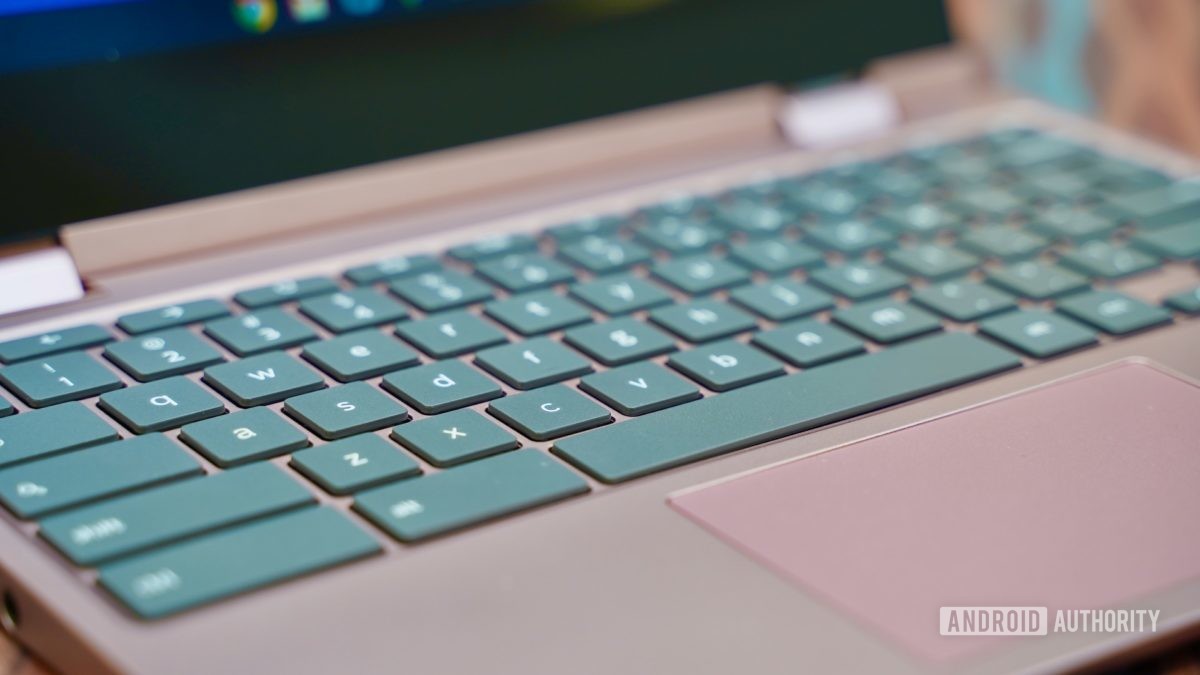 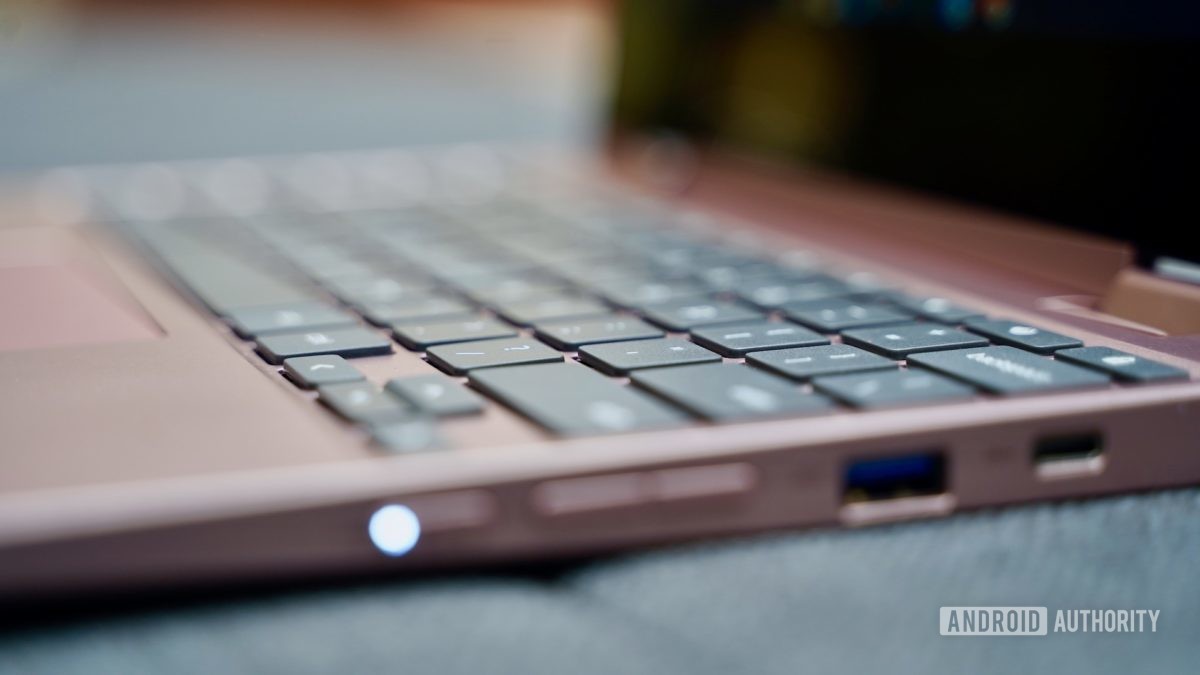 The keyboard doesn’t do it for me, either. I appreciate that the keyboard deck is firm, meaning the frame is solid and doesn’t bend or sag when typing. That said, the keys are tall, with a rounded shape that tripped up my fingers. Further, the keys require quite a bit more travel than I care for and this slowed my typing speed. Last, it’s not backlit which is a dealbreaker for me. I realize these gripes are personal and others may find the keyboard delightful. Moreover, skipping the backlight likely helped Lenovo keep the cost down.

Last, the speakers are not the best. The C340 has two bottom-firing speakers mounted underneath the chassis. When placed on a hard surface, such as a desk or a table, you’ll get plenty of sound. If you prop the Chromebook up on a pillow or blanket, the sound tends to get muffled. Simple physics. The sound itself is all mids and highs; there’s absolutely no bass at all. If you turn it all the way up you get a distorted mess. You’re better off using headphones.

Should you buy the Lenovo Chromebook C340? 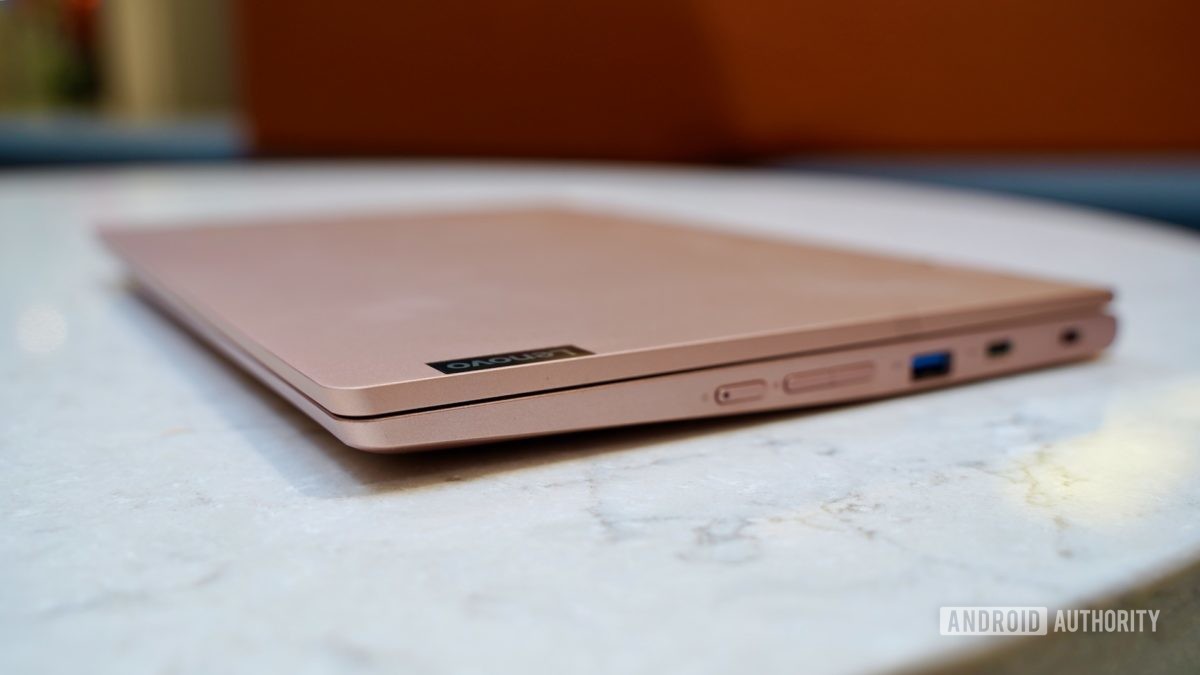 Lenovo’s problem here is the competition. There are literally dozens of models available from a range of manufacturers in the $200 to $400 space. Thanks to the size and price, I would recommend the C340 to middle schoolers who aren’t sticklers for specs and performance. If you want more from your Chromebook, you may have to spend more to get it. Lenovo itself has a faster, 15-inch version of the C340, as well as clamshell variants such as the S340 14-inch and S340 15-inch.

Chromebooks are so varied there’s surely an exact fit for everyone. The C340 11-inch perhaps fits best for younger users.

Buy from Amazon
Buy from Lenovo

Pick up a refurbished Dell Chromebook from just $75

When will your Chromebook stop seeing updates? Here’s how to check.

What is dynamic range in photography? Everything you need to know