Home » Taking your Switch on vacation? Try one of these backups!

Taking your Switch on vacation? Try one of these backups! 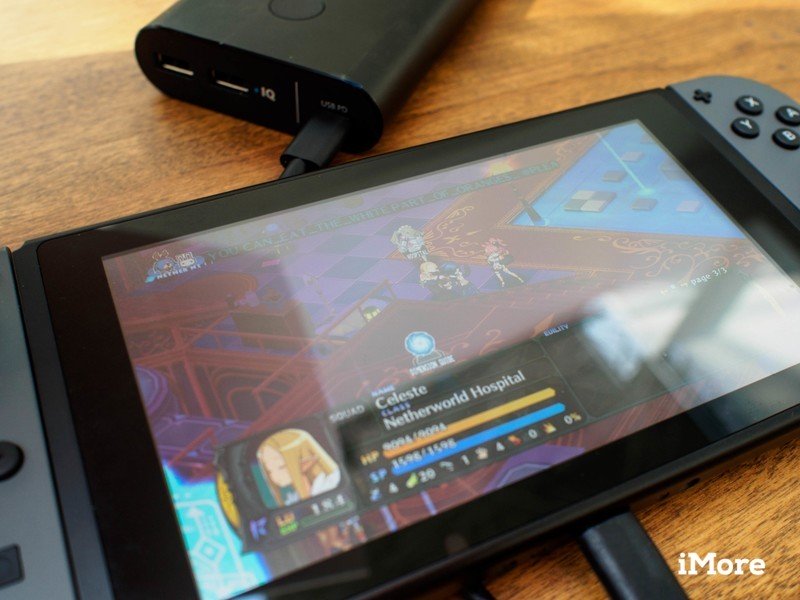 Back up your Nintendo Switch battery so you never lose out on hours of entertainment. With a portable charger you can feel safe when you’re out since being on the go sometimes means being without power. That doesn’t have to be the case; plug it into a backup and play for hours! Our favorite is the Anker PowerCore+; It has a massive battery but most importantly, it can charge your Switch even while you play. 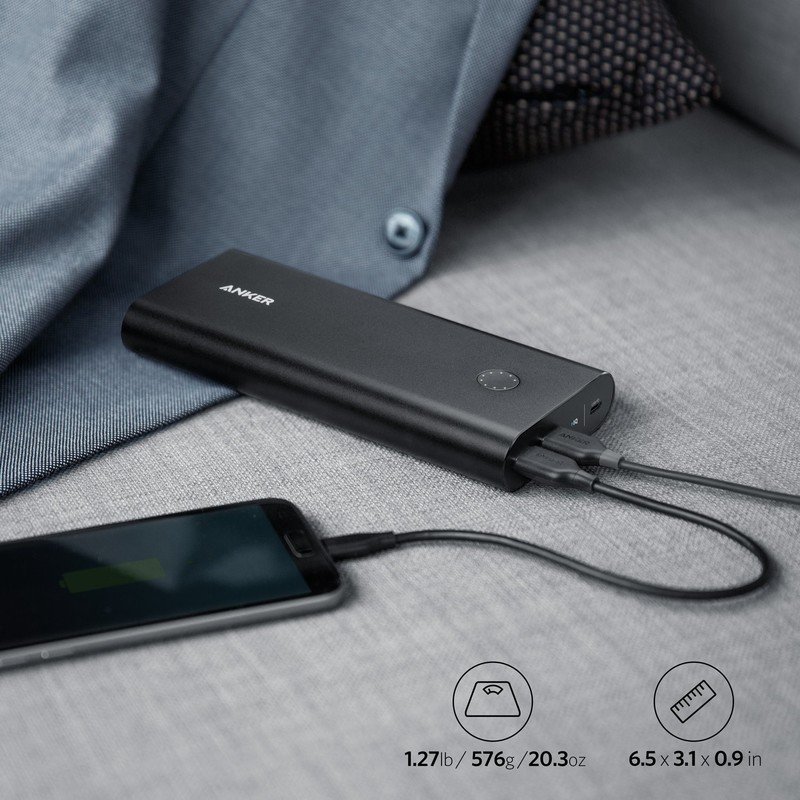 It’s a great battery for road trips, extended flights, or just keeping in the car to top off when you need. The additional USB ports can be used while you are charging your Switch, which means you can also use this to charge your phone, tablet, controller, or anything else you can think of. It’s not a cheap battery, but it’ll keep you playing your Switch for quite a while.

The key to its success is how much energy can be output via the USB-C port. This battery is rated at 30W output through that port, something most batteries cannot do. That means while many other batteries will charge your Switch slowly, this is one of few that will keep your Switch at 100% until you disconnect.

Ultimately, it’s a combination of price and the “PD” part of the name. USB-C has a feature called Power Delivery, which is frequently shortened to PD in descriptions. USB-C PD means it can output at higher power levels, which your Nintendo Switch needs to charge while you’re playing it. Without Power Delivery, most batteries can’t provide more energy than the Switch consumes when playing a game. That means your Switch will run out of power slower, but it will still eventually run out of power when connected to an average battery.

Your Nintendo Switch is great for a couple of hours away from the dock, but then it needs power. The fastest way to charge your Switch is usually to put it back in the dock because Nintendo’s included power adapter has some special features to charge your Switch battery quickly but safely. It turns out you can get very nearly as close to the same charge rate if you use a USB-C battery with Power Delivery. 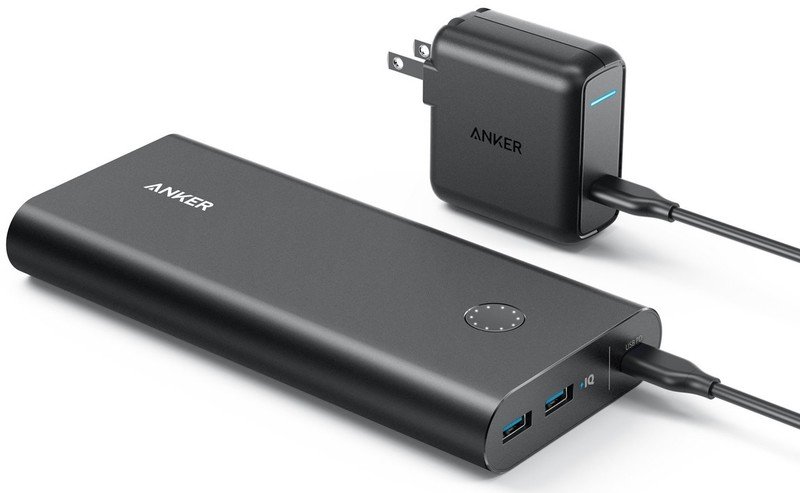 Get 21 hours of gameplay instead of four.

This is the best battery backup, with a 30-watt USB-C PD transfer, you can continue playing on your Switch while it’s charging. 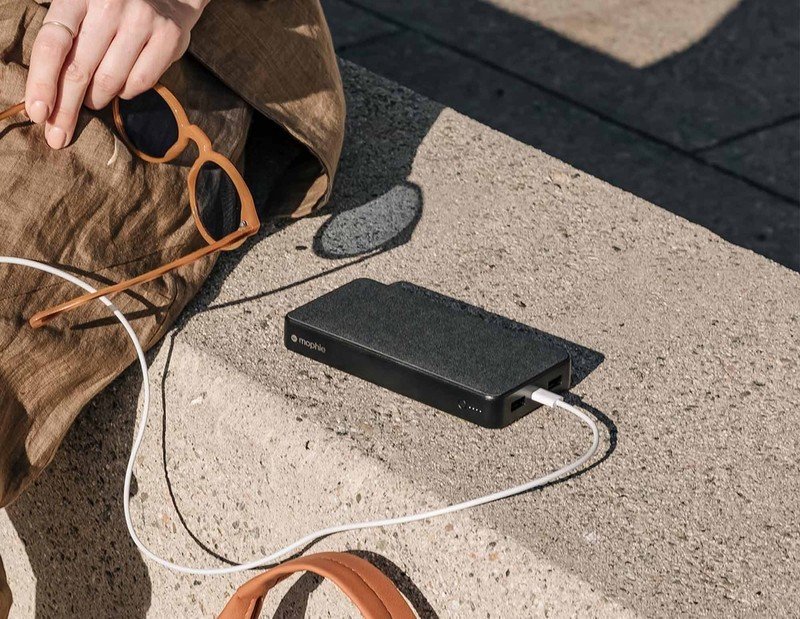 Not everyone wants a big-honkin’ battery. Sometimes all you want is something you can slide in your pocket, or clip on to the back so it’s all one piece with the Switch. These alternatives not only exist, but they’re pretty good.

You can buy giant batteries to power your Switch multiple times over, but you may not be super happy about carrying it around places. These batteries are often heavy or oddly shaped, making them difficult to fit in a pocket or small carrying case for your console. The Powerstation XXL is pretty darn big, but it’s actually smaller than most batteries in its category. It’s capable of charging up your Switch with an additional 14 hours of use, but like many USB-C battery backups, it’ll only keep it from going dead if you’re trying to play and charge at the same time. 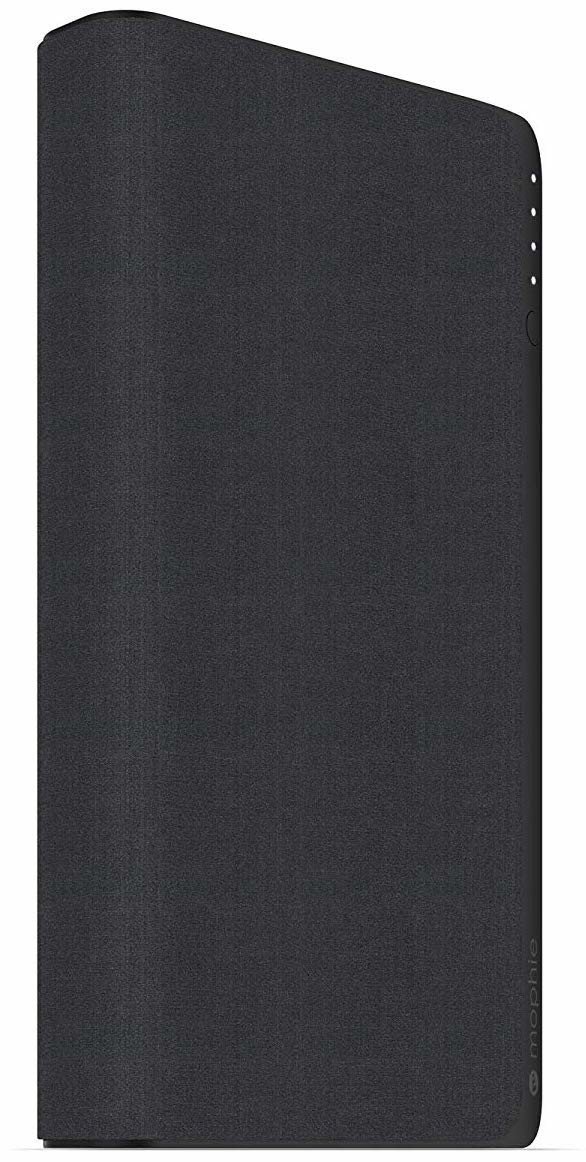 Striking a balance between portable and capable is a challenge, the Powerstation XXL adds a whopping 14 hours to your battery life. 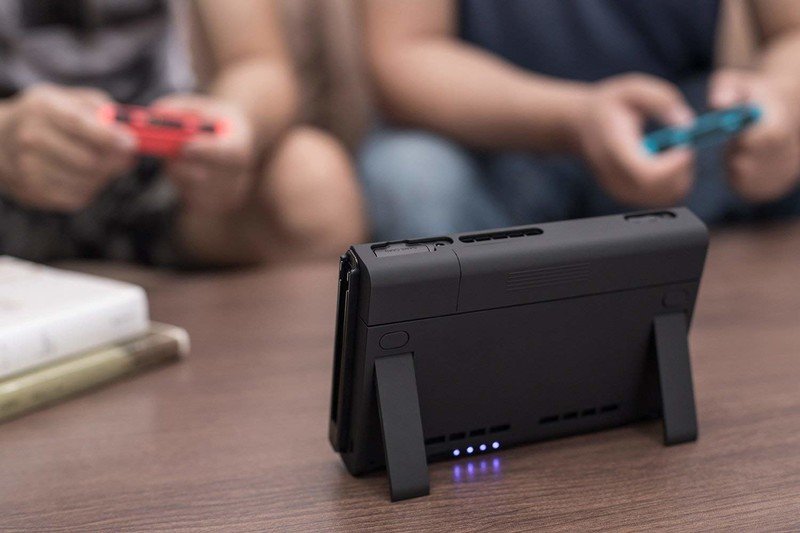 If you don’t want to worry about cables, this is your best bet for a Switch battery. It’s like a charging case for your Switch. It clips on to the back of the device and has a USB-C plug that sends the juice to your Switch. It also has a little compartment on the back so you can take two additional game cards with you. It has two kickstands on the back, instead of that awkward and unbalanced design the Switch comes with. The four-light status LEDs on the back will let you know when the charger needs its own charge.

It only has a 6500mAh battery, so you’re not going to get a full 14 or 20 hours of additional gameplay out of it, but this little guy’s got it where it counts. When you’re just going to need a little extra power while you shred games in the car, you’ll get through a few additional hours of leveling before you need to re-up. 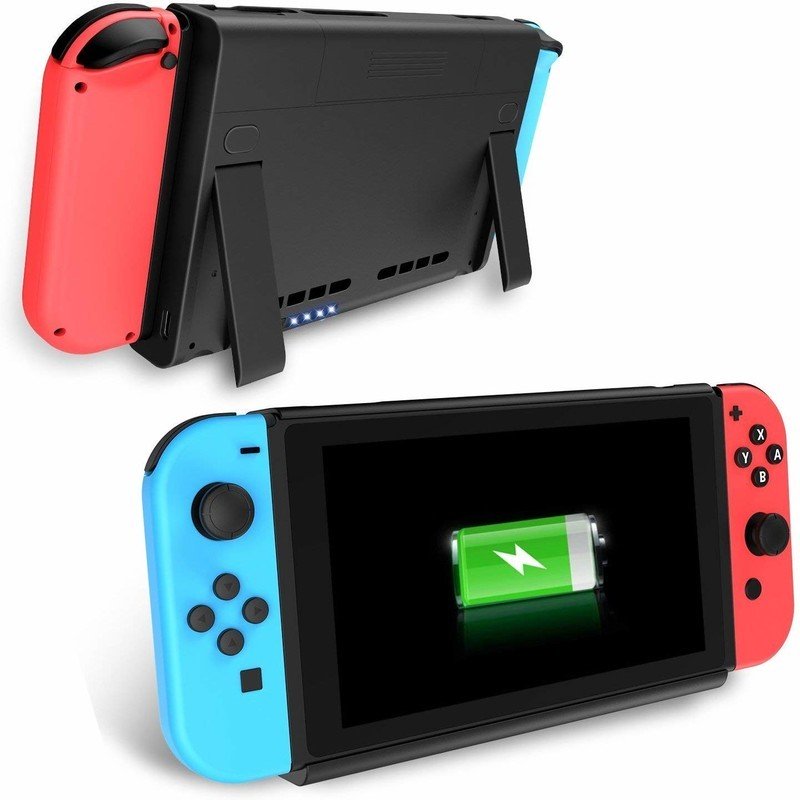 Convenient, compact, and ready to charge.

The Antank Portable Switch Backup Battery attaches directly to the back of your Switch so you can continue gaming non-stop. 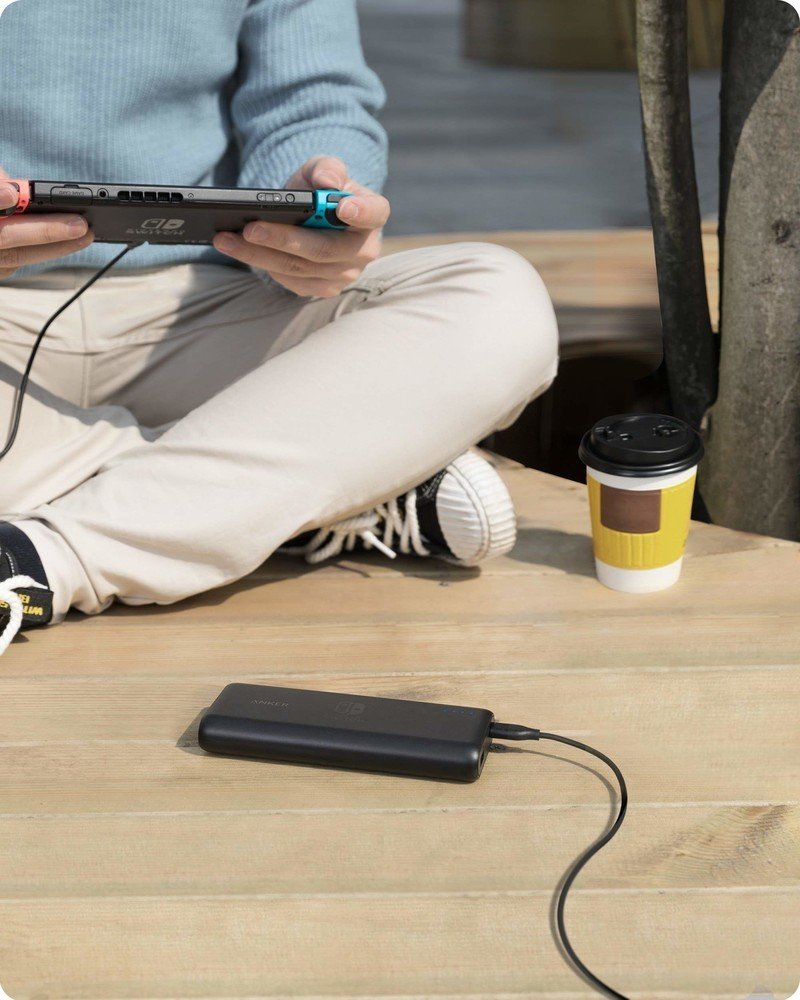 This is the official Nintendo-licensed power bank on the market, so it will charge your Nintendo Switch while you play.

This PowerCore battery pack from Anker is officially licensed by Nintendo, so you know it will work properly with your Switch. It packs in 20100mAh of power (slightly less than the PowerCore+ 26800 PD), but also has Power Delivery, so you can keep on playing and actually get your juice back to 100%. Anker makes a solid quality battery. Considering it packs a hefty juice box, it’s pretty sleek. Its biggest downfall is that it’s a tad overpriced, likely because of official licensing. 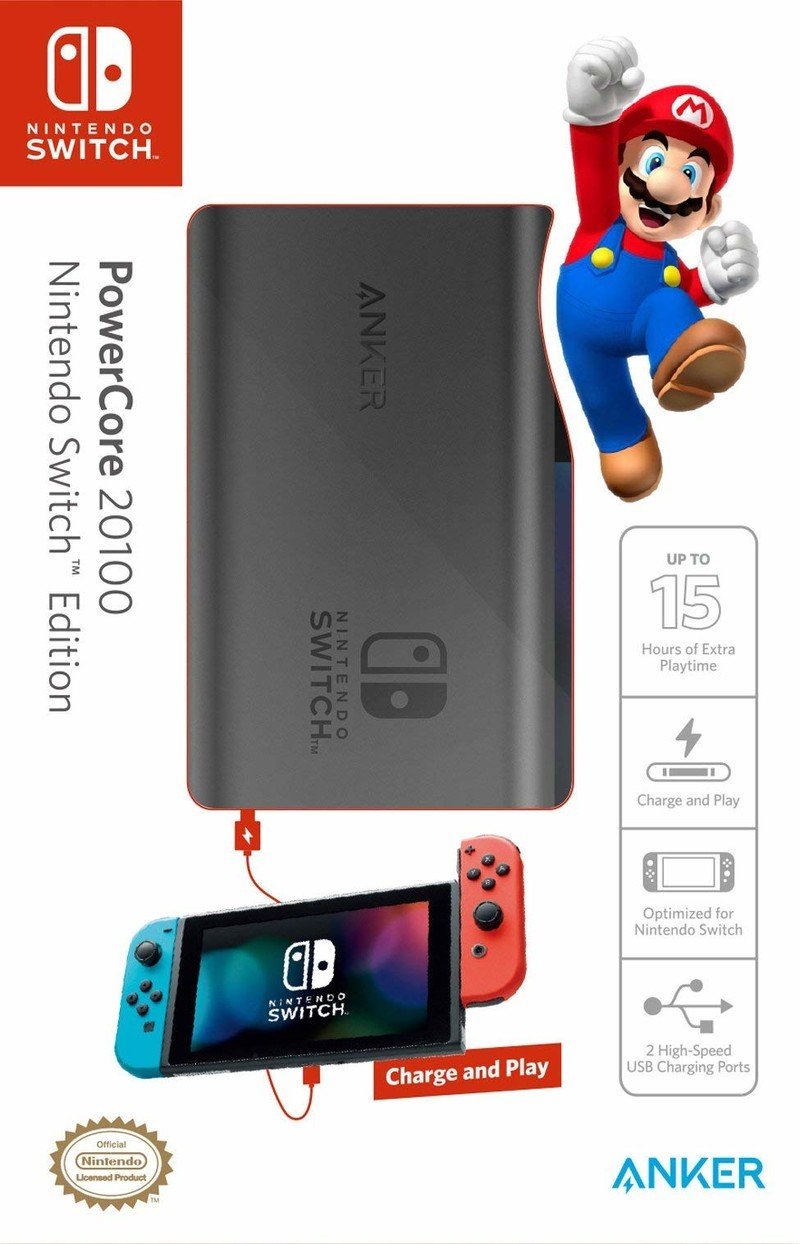 Portable power in the palm of your hand.

This convenient power bank is specifically designed to work with your Switch. You get 2.5 charges and can charge while you play.

When you combine power output, price, and design, the Anker PowerCore+ battery quickly becomes the best option for just about every situation. Not only is the Anker PowerCore+ huge with its 26,800mAh capacity, but it can also push out that energy with enough current to keep your Switch topped off even when jamming along in Mario Kart 8. At the price, you get the biggest bang for your buck. That’s why we recommend it above everything else: It will keep you going longer than anything else on this list.

Size-wise the Anker Powercore isn’t terrible either. It’s long and thin, making it easy to stow in your backpack and the beveled edges make it comfortable to have it in your pocket. It does start to get heavy after a while though, so keep it stowed if you can.

Of course, sometimes all you want is the official product backed by Nintendo to run perfectly on your Switch. In that case, the “Licensed by Nintendo” Anker PowerCore 20100 is a great choice, and it’s almost the same as the one we recommend. You know it will work and work well because Nintendo says so. So do we.

Russell Holly is a Contributing Editor at iMore. He lives for the shiniest new thing and loves explaining its potential to improve your life. Whatever you do, don’t tell his spouse about the drawer full of tech under the bed.

Lory Gil is iMore’s Managing Editor and Nintendo Switch fan at-large. She never leaves home without her Switch, which is why she’s an expert on which battery pack is best.

Christine Chan is a staff writer at iMore. She loves her Nintendo Switch and is never seen without it. She knows a thing or two about what battery packs are good for the console.