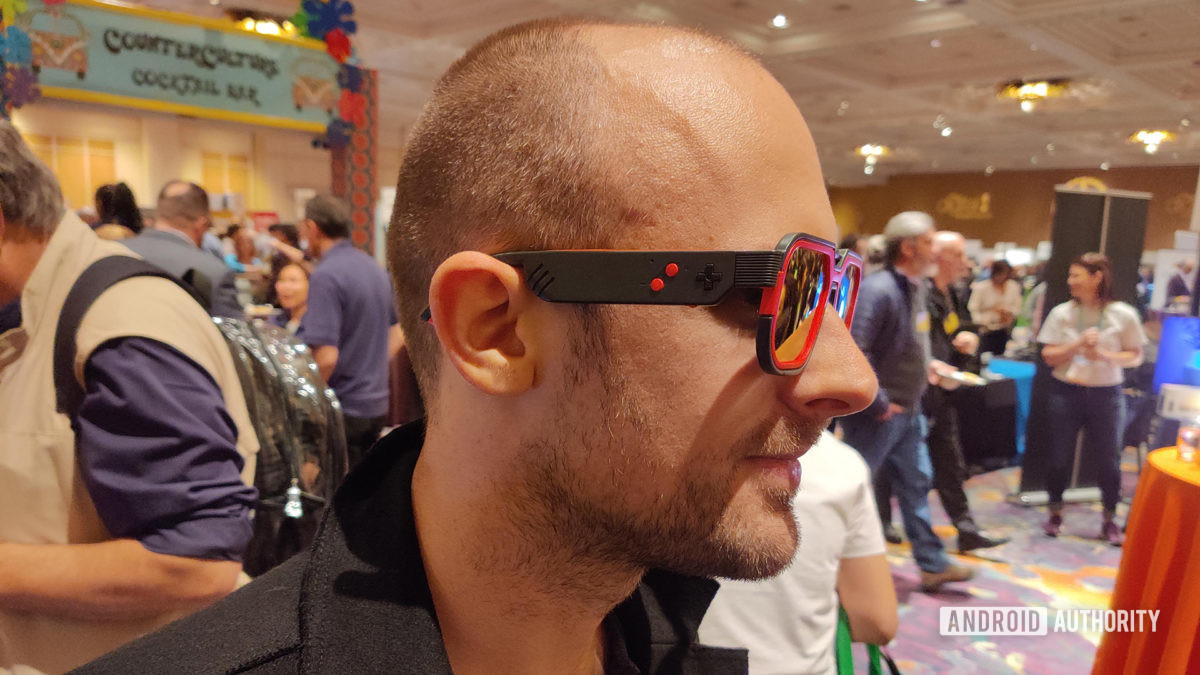 The Consumer Electronics Show, better known as CES, is the largest of its kind in the world. Thousands of companies descend upon Las Vegas to show off their latest creations. The law of averages state that if you get that many tech companies together, there’s definitely going to be some weird tech to see.

Sure enough, the 2020 iteration of CES was filled with weird tech products that left us scratching our heads. Some of the products made us ask ourselves, “Why was this made?”, while others had a definable purpose but some sort of bizarre design element.

Weird tech is one of those “you know it when you see it” things. We wandered around the massive show floor seeking out all the off-the-wall tech we could find and rounded up the best of the best (or worst) below.

Want to see the weird tech from last year? Check out our 2019 roundup here. 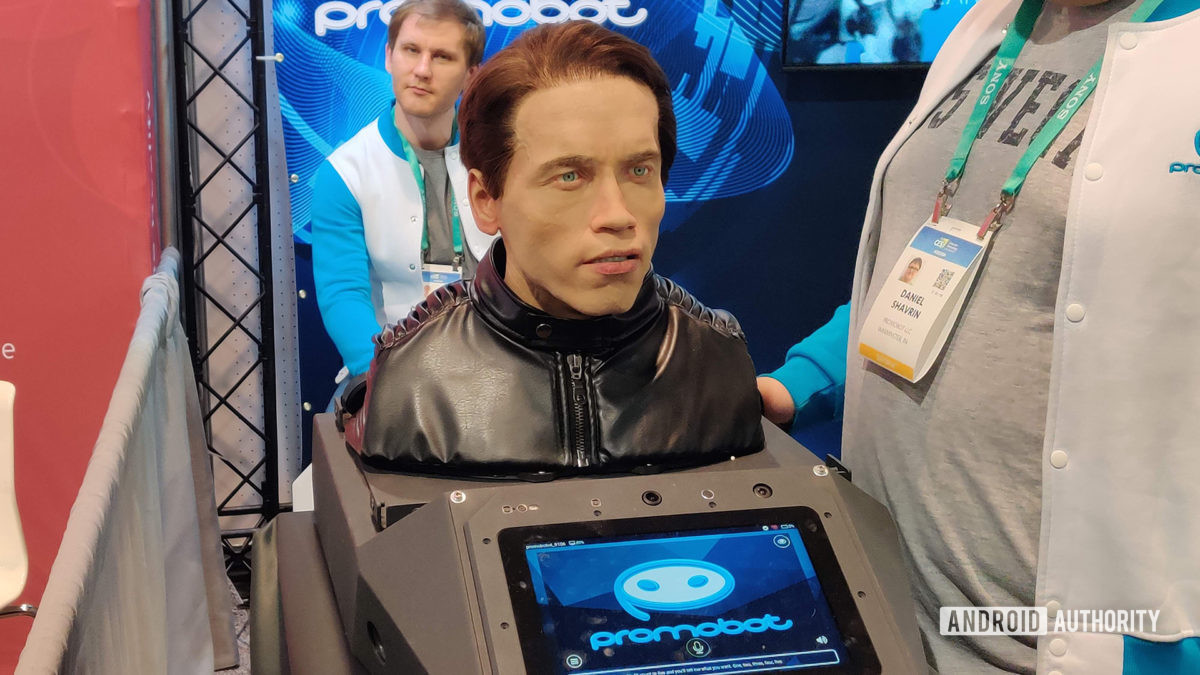 If you’re an unknown brand trying to push your product at a trade show, figuring out a way to tie-in some sort of pop culture imagery is an easy way to gain some press. However, if what you’re trying to push is an AI-based robot, you probably don’t want to associate that with a fictional relentless killing machine.

That’s exactly what a company called Promobot did, against better judgment. To show off its capabilities when it comes to creating AI-powered robotics, it created a replica of Arnold Schwarzenegger’s iconic Model 101 character from the classic 1984 film The Terminator. Thankfully, though, Promobot decided against giving the robot a thick Austrian accent.

The robot’s movements and vocalizations are, in a word, creepy, and not just because a Model 101 would kill everyone at CES in a matter of minutes. It seems almost human but still very robotic, and definitely unsettling. Promobot might want to do something a little more lighthearted for next year. Maybe a robot Pikachu? 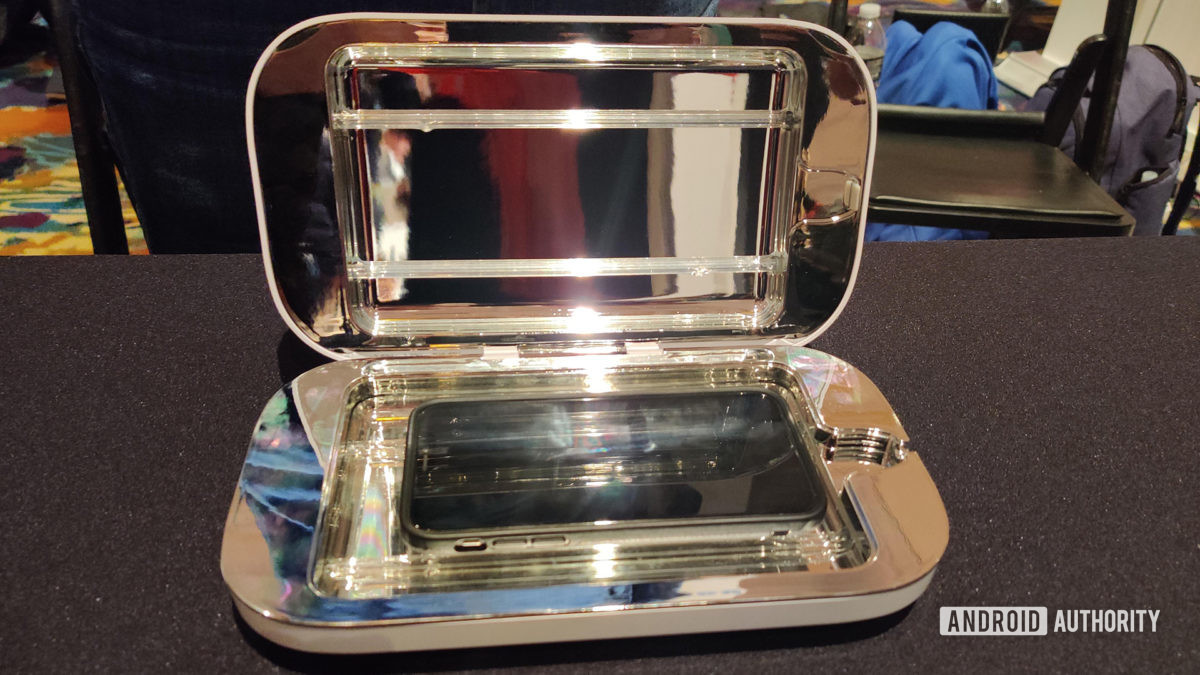 Our phones are filthy bacteria factories, there’s no doubt about it. You might periodically give your phone a wipe down on your shirt or even attack it with an alcohol pad every once in a while, but chances are good that no matter what you’re doing it isn’t good enough.

To solve this problem, you could buy a PhoneSoap device, which is, quite literally, a tanning bed for your phone. You rest your device inside the highly reflective clamshell case and close it up. Over the next ten minutes, the PhoneSoap device will (supposedly) kill 99.999% of the bacteria on the device by blasting it with UV light.

Of course, we weren’t able to test this out on the show floor but we are skeptical it does what it says. However, if you’re a germaphobe and don’t mind spending $80 for this, click the button below. 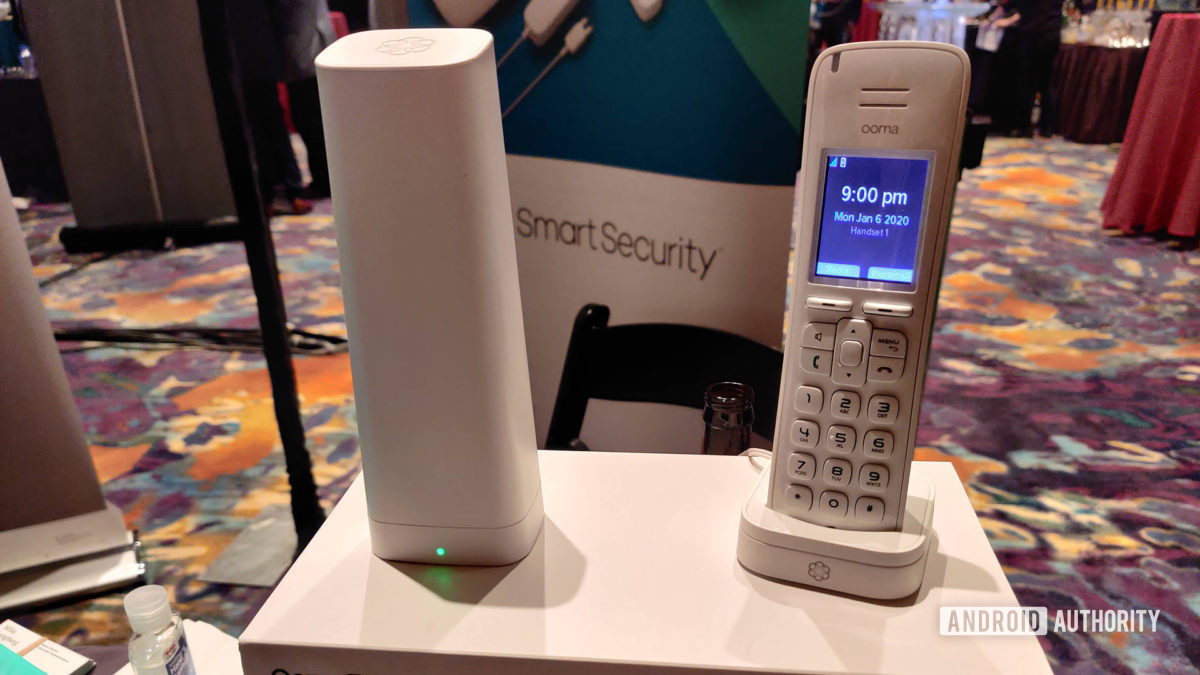 This is a product that seems pretty normal on the outside, albeit kind of boring. However, once you realize what the device actually is you start to wonder, “Why would anyone buy this in 2020?”

The Ooma Telo 4G is a VoIP phone meant to replace your traditional landline. The thing that makes it unique is that it connects to a cellular 4G router that connects to Sprint towers, making your home phone into, well, a 4G LTE phone.

You know, kind of like the phone that’s in your pocket right now.

We’re not even going to go into the question of why people still want landlines. If you want a landline then we’re sure you have legitimate reasons. But why would you need a landline that is essentially just a dumb LTE phone? It doesn’t really make any sense to us, especially when you realize you need to pay $120 for the hardware and then $12 per month for the 4G service.

Nevertheless, if you want this device, click below to grab it. 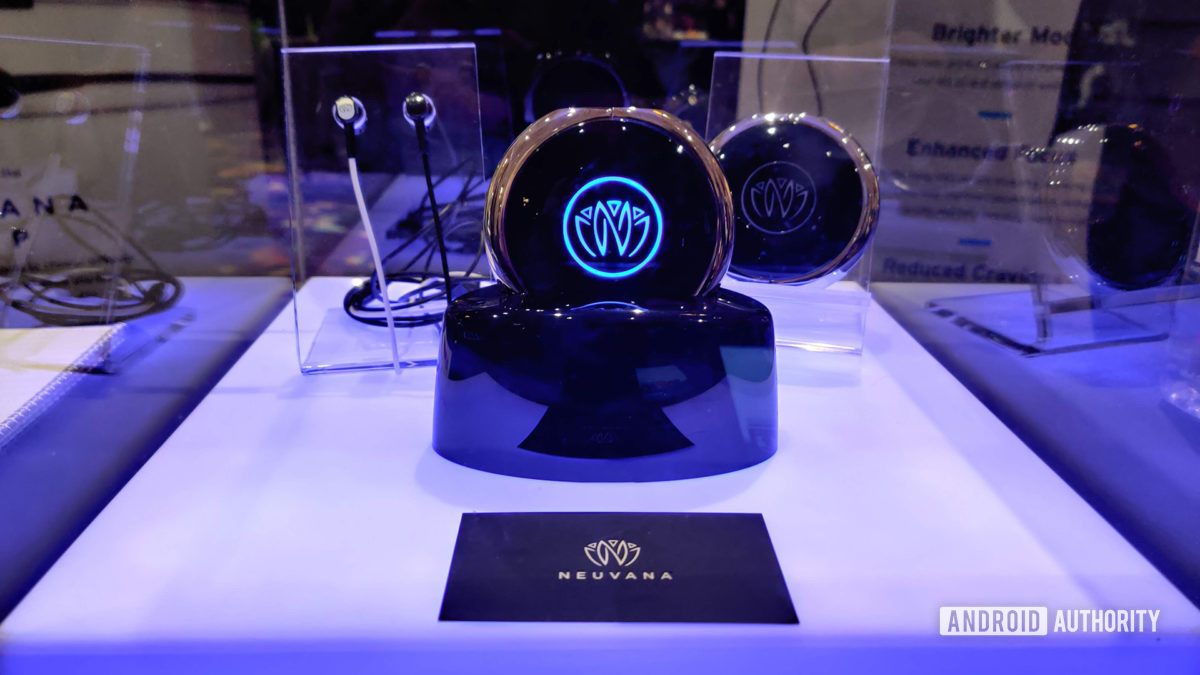 Every year, CES sees a barrage of pseudo-scientific snake oil products that make big claims about how using them will result in better health. We saw a few on the floor this year, but Xen from a company called Neuvana took the cake as far as preposterous flimflam technology goes.

According to Neuvana, the key to helping you with sleep, stress, and other daily ailments is vagus nerve stimulation through earbuds. Yes, the Xen product is essentially a $400 (!!) set of earbuds with a device attached that releases tiny vibrations into your ears while you listen to music.

Now, vagus nerve stimulation is a real thing. It’s a mostly unproven procedure used to treat epilepsy and depression — but even that usage is contested by members of the medical community.

However, all Neuvana needs to do is slap a “not a medical device” disclaimer on the Xen box and it can pretty much say whatever it wants regardless of scientific or medical accuracy. Of course, we are not doctors or scientists here so we can’t say anything for certain, but we’re confident in saying that the only thing Xen by Neuvana will likely do is make your wallet lighter.

The new Gaming Glasses from a company called Mutrics are a very strange product. They look like sunglasses but they’re not meant to be worn outside. The stems have buttons on the side that look like video game controller buttons, but they aren’t. They also are Bluetooth headphones. Yes, really.

Essentially, Mutrics Gaming Glasses are meant for gamers to wear while they game. The lenses on the frames filter out blue light, which Mutrics claims will reduce eye strain during long gaming sessions.

The sides of the stems have micro speakers that fire sound into your ears, making the glasses kind of like a gaming headset. To coincide with gaming culture, the glasses come in various colorways, including one that mimics the classic color scheme of the Super Nintendo Entertainment System.

Honestly, this might be a product you think is cool. We think it’s kind of goofy and one of those things that you would never actually use in a real-world situation. But hey, don’t let us tell you what to do — click the button below to grab yours from Mutrics Kickstarter campaign. 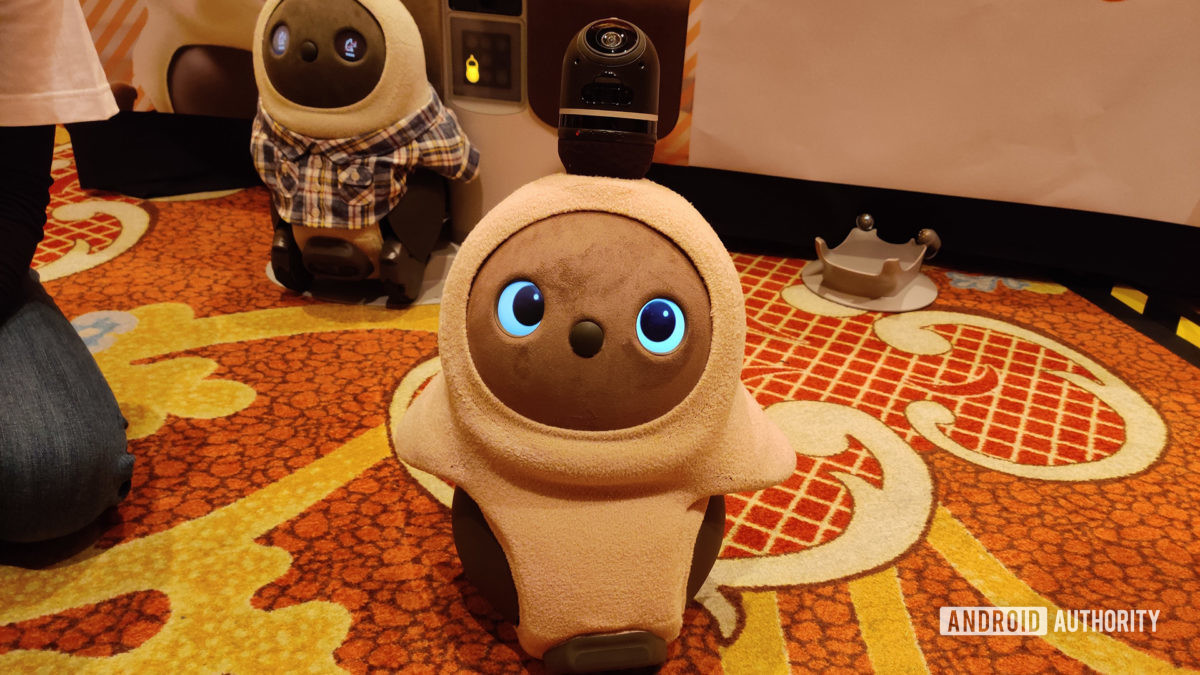 If CES happened six months ago, the cute little Lovot from Japanese company Groove X might not have been on this list. We saw early prototypes of the robot at last year’s CES and it seemed like a fun, high-tech toy perfect for families in which owning a real pet would be impractical.

However, the retail version of Lovot as seen above has a giant connected camera on its head that it uses to navigate around your home. While it does this, it tracks the layout of your house enabling you to send Lovot to specific areas.

Of course, Groove X gets all this information through the robot’s connectivity. In a time when multiple camera-connected companies are facing privacy breaches and security leaks, a camera that moves around your house broadcasting the information to a Japanese server seems more unsettling than anything else. 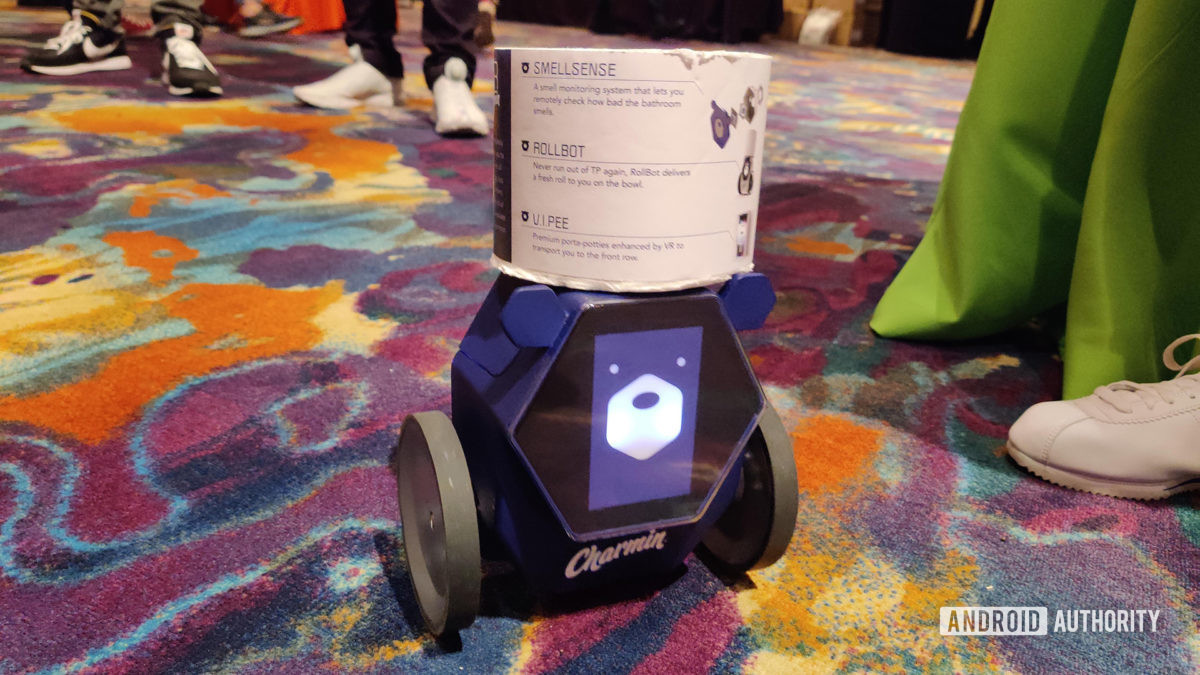 It’s kind of funny to think about, but Charmin’s RollBot probably got more press than any other piece of weird tech at CES 2020. The thing is a marketing machine, ticking off all the boxes: cute, silly, and a technical marvel.

The RollBot’s function is very basic: it will come to find you when you request a new roll of toilet paper while you are sitting on the porcelain throne. The RollBot charmed everyone at CES while it rolled around the show floor autonomously trying to find someone in need of some fresh TP.

Unfortunately, the Charmin RollBot isn’t an actual product. It and several other pieces of Charmin tech shown at CES are simply for marketing purposes. It appears to be working wonders as there aren’t too many tech sites that haven’t reported on the cute little bathroom robot.

That’s the best weird tech we found at CES 2020! Which one was your favorite? Sound off in the comments below.

Smart lock on a door? Psh, now you can have them on cabinets, safes, and more

Google Docs grammar suggestions will help you with ‘their,’ ‘there,’ and ‘they’re’ 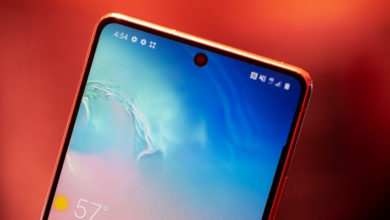 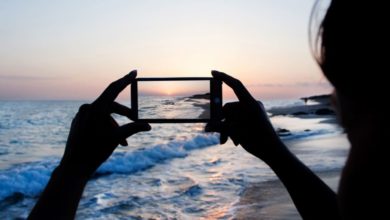