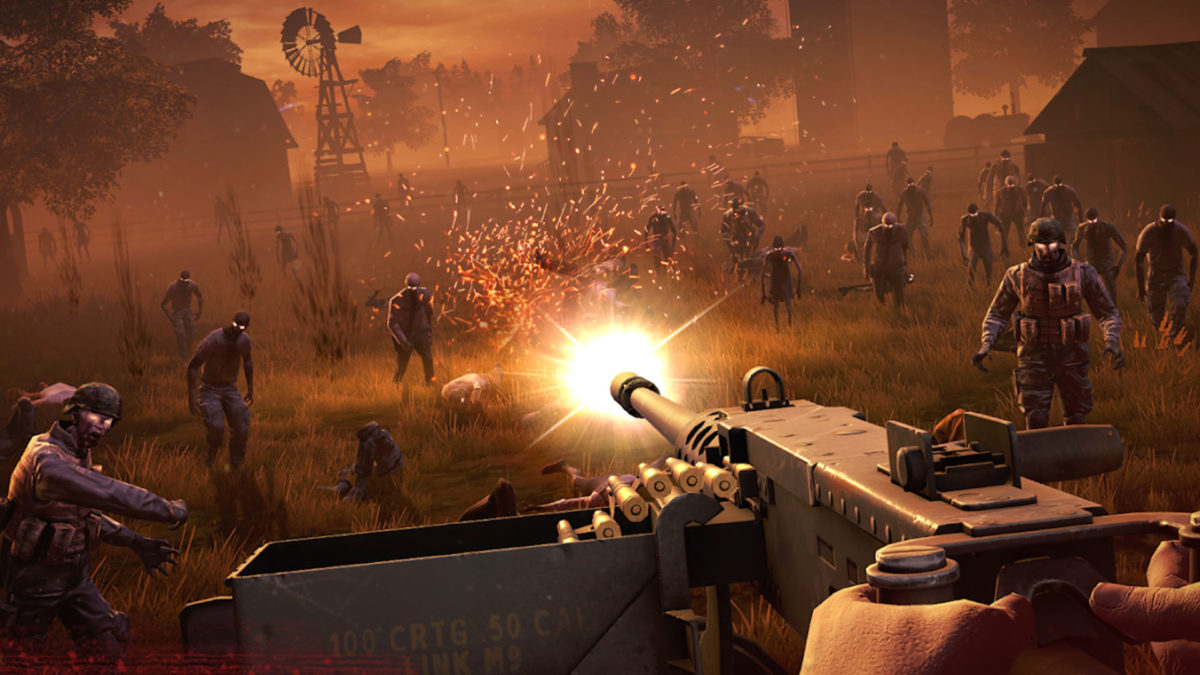 Action games are among the most popular on any platform. They get the blood pumping, the fingers moving, and it’s a great way to test your reflexes and wits. There are a variety of action games out there, including shooters, fighting games, adventure games, platformers, and more. However, the DNA of a good action game is if keeps you going. There are tons of games to choose from, so here are 15 of the best action games for Android! 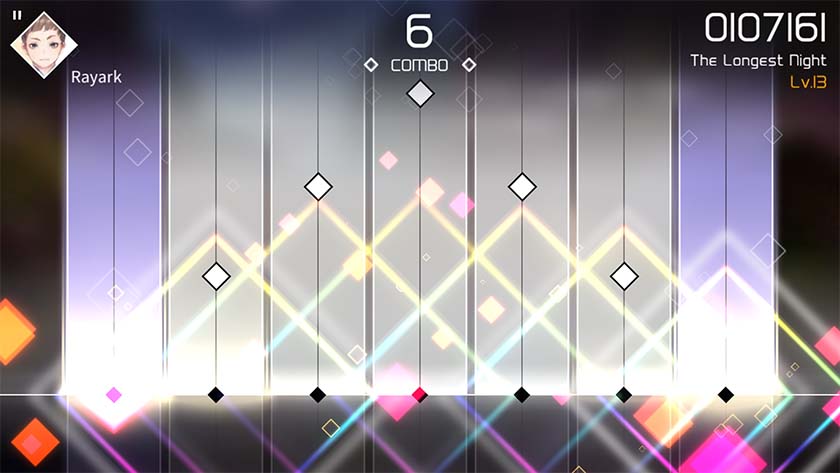 Ailment is a classic, retro-style, top-down shooter. It’s more or less your classic arcade action shooter. You have an option between a bunch of different weapons, multiplayer support, and plenty of violence. Obviously, this one isn’t great for younger kids. In any case, the controls are easy enough to learn and the retro graphics are charming. It also has some smaller niceties like secret Easter eggs and a narrative to follow. This one keeps the action going in all of its retro glory, even if you have to watch an ad to revive yourself every time.

Blackmoor 2 is a hack-and-slash platformer with some fun elements. You get your standard platformer experience similar to old Castlevania games. However, the game also comes with co-op multiplayer, online PvP, and a build mode. We actually quite like the build mode because you can build your own levels and share them with other players. It’s a neat touch for a mobile game. In any case, you get the usual nice things like Google Play Games cloud saving and some other stuff. It has the occasional bug, but nothing serious.

Brawl Stars is a new action game from Supercell, developers of Clash of Clans and Clash Royale. This game pits players against one another in a beat ’em up style game. Most of the game modes feature three versus three player team battles. However, you can do two versus two and one versus one combat modes as well. The game types range from taking out certain players to capturing their loot. It doesn’t matter, though, because every game mode can get intense. The online matchmaking can occasionally make the experience less fun, but that’s how online PvP usually goes. We also appreciate the simple mechanics and quick games.

Call of Duty: Mobile is the most popular FPS game on mobile at the time of this writing. It has all of the elements of a good online shooter. There are multiple PvP modes, various things to unlock, and the graphics and game play are both excellent. It has a 100-player battle royale mode similar to Fortnite and PUBG Mobile (two more excellent action games) along with the standard deathmatch style like Modern Combat and Critical Ops (another two excellent action games). However, Call of Duty: Mobile is the top dog right now in the genre and so it’s the one we’ll recommend first. Any of the four other games we mentioned would fit well on this list too.

The action genre can span various other genres and so does Evoland 2. The game features hack-and-slash, trading card, 2D RPG, 3D fighter, and arcade mechanics across its story and mini-game lineup. Players traverse through the game’s story. As you progress, the graphics and mechanics change. You may be playing a retro Legend of Zelda style hack and slash one moment, and a match-three combat game the next. The first game in the series is very similar and much cheaper. You really can’t go wrong with way. Evoland 2 is $7.99 with no in-app purchases or ads and is frequently on sale for less than that.

DOWNLOAD ON GOOGLE PLAY!
We have some more awesome game lists for you here! 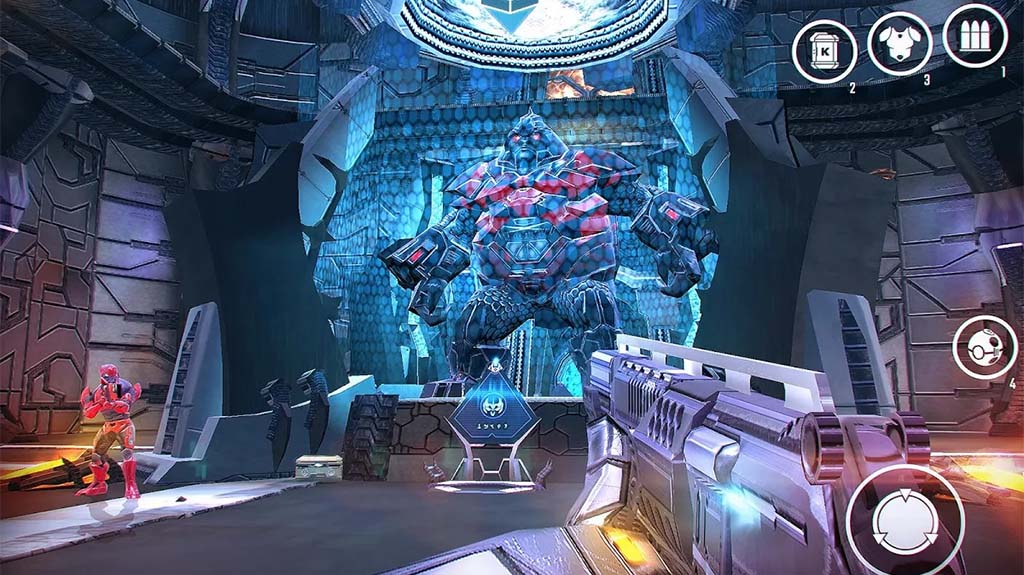 GRID Autosport is a newer racing game and one of the truly excellent releases of 2019. It boasts 100 unlockable cars along with 100 events to race through. Additionally, you get all of the original game’s DLC along with scalable difficulty so you can play at a level that offers challenge but isn’t too difficult. It’s a large and deep game, but never loses its arcade racing roots. This is one of the truly good ones, folks, even if the price tag is as little high.

Most people have heard of Halfbrick Studios. They have a number of huge games in their library and they’re all decent action games. Some of the games include Dan The Man (beat ’em up), Fruit Ninja (arcade), and Jetpack Joyride (endless runner). There are many others as well. The games all feature bright, colorful graphics, family friendly content, and simple controls. Not all action games require guns, explosions, or things like that. Halfbrick Studios proves it with their lineup. The games are usually free to play and they’re all action-arcade mobile classics.

Into the Dead 2 is one of the more unique runners on mobile. You run through a field with weapons and defend yourself against the zombie horde. The second game adds a lot from the first game. That includes multiple endings, more weapons, a dog companion, and even some tower defense elements. The game also features daily and special events, but that’s fairly normal for free to play titles. The endless runner style along with the shooter elements combines two excellent action genres into a single experience. This is another one of the really good ones.

MADFINGER Games is a developer on Google Play with several excellent action games. Their most popular titles are the zombie shooters Dead Trigger, Dead Trigger 2, and UNKILLED. Each one has more feature than the last along with outstanding graphics, decent shooter mechanics, tons of stuff to do, and, in the case of UNKILLED, online multiplayer. MADFINGER also makes the Shadowgun series of FPS games. Those are more traditional sci-fi style FPS shooters and arguably among the best in the genre. You really can’t go wrong with any of the games in MADFINGER’s library. They’re all excellent action games.

Maple Media is a developer on Google Play with a variety of extreme sports games. That includes classics like Skateboard Paty 3, Snowboard Party, Mike V: Skateboard Party, and the newly released Tony Hawk’s Skate Jam. The mechanics are occasionally clunky. However, this is about as close to early 2000’s style extreme sports games as you can get. The pacing is good and the graphics are about as good as expected for a mobile game. The biggest problems with any of these games are the occasionally clunky controls, but if you can get passed that, these are the best extreme sports games on mobile.

DOWNLOAD ON GOOGLE PLAY!
There are more good mobile games than you think. Check these out! 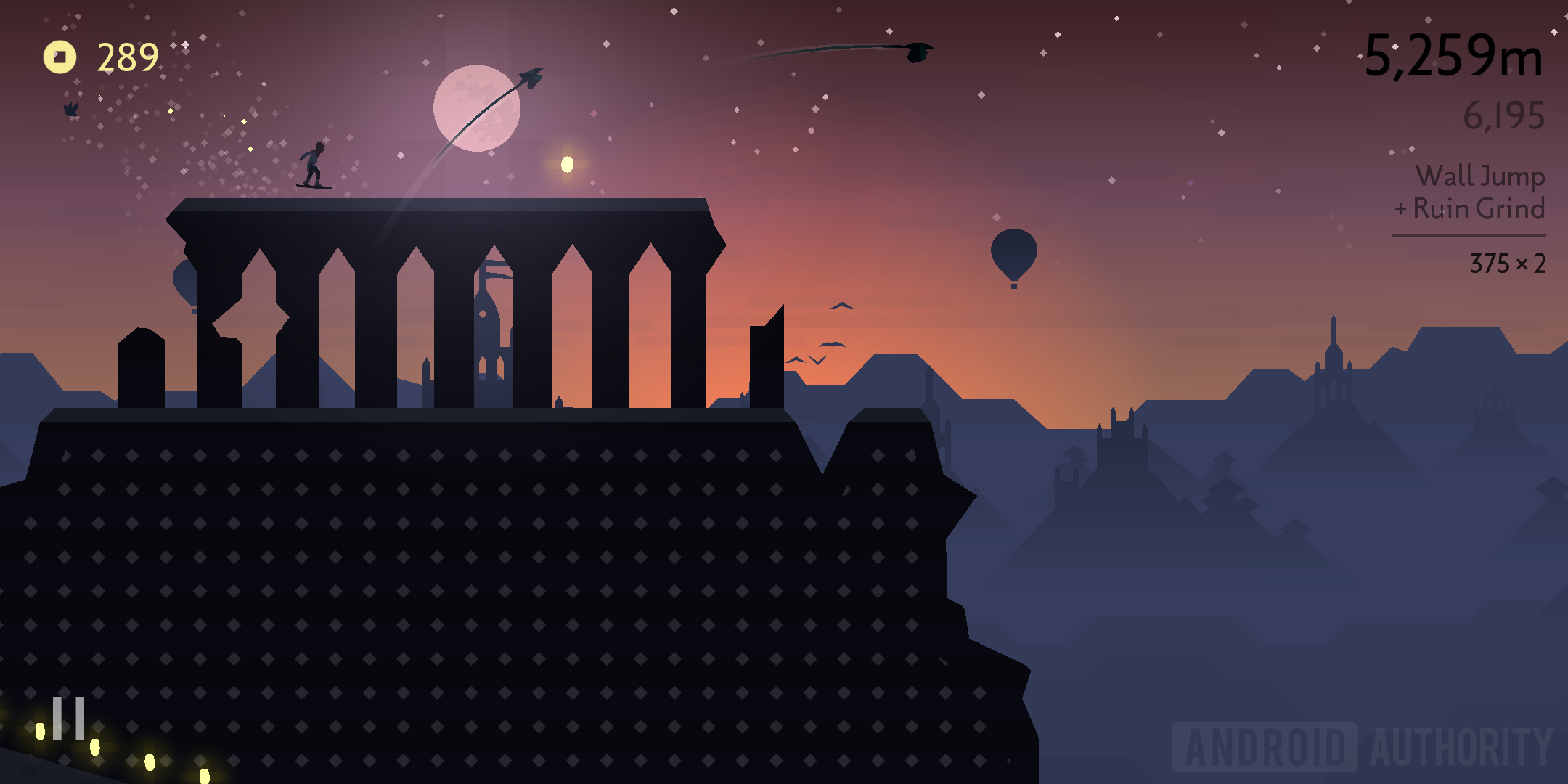 The Mighty Quest for Epic Loot

The Mighty Quest for Epic Loot is one of the newer hack-and-slash games for mobile. There are a ton of excellent games in the genre and we chose this one because it’s newer. The game features simple one-handed controls, tons of hack-and-slashing, and it has over 1,000 items to customize your hero. You also get a solo player campaign, online multiplayer, and limited time events to keep things fresh. It ticks all of the boxes and aside from the occasional bug and the painfully long tutorial, people seem to like this one a lot.

PPKP is a newer arcade action game. It features beat ’em up mechanics, very simple controls, and some extra stuff. You explore 2D environments, hammer on bad guys, and collect various items. The items are usable for various upgrades and there is a level up system as well. These types of games are usually just repetitive without much of an end game. However, this one has boss fights, a linear story path, and an end boss. You can actually finish this game. However, the game doesn’t have any replay value once you beat it. Still, it’s a good time and it has plenty of finger-flinging action.

Rayark is a developer on Google Play and one of the few that do really good rhythm games. Their list of titles is extensive, and include Cytus I and II, VOEZ, Deemo, Mandora, Implosion, and Sdorica. All of these games start out fairly simple and get rather intense fairly quickly. Each game has a narrative along with a list of songs to play. Each game lets you buy additional song packs as in-app purchases. That gives them the appearance of freemium games. However, these DLC packs are permanent additions to the game, so they’re not.

Sky Force Reloaded is a top-down shooter with tons of action. Each level has you flying through a battlefield, destroying enemies, complete in-level objectives, and avoid being destroyed. The game also has various aircraft to unlock, upgrades, and card buffs to make things easier. It rounds out the experience with beautiful, colorful graphics, voice over work, and a decent soundtrack. It’s a bit older and there are plenty of other top-down shooters. However, few have the polish of Sky Force Reloaded.

The Swords of Ditto

The Swords of Ditto is kind of our diamond in the rough pick. It’s an action-adventure game with a lot of excellent game mechanics. The game had a bad start because of its control structure. However, the developers added better controls later on and people seem to like the game now. It features a narrative story, RPG progression, and plenty of things to see and do. You also get dungeons to explore and plenty of bad guys to fight. It’s a strong offering and it’s nice to see developers bring games back from the brink of being failures.

Related ArticlesThank you for reading! We have a few more Android game recommendations! 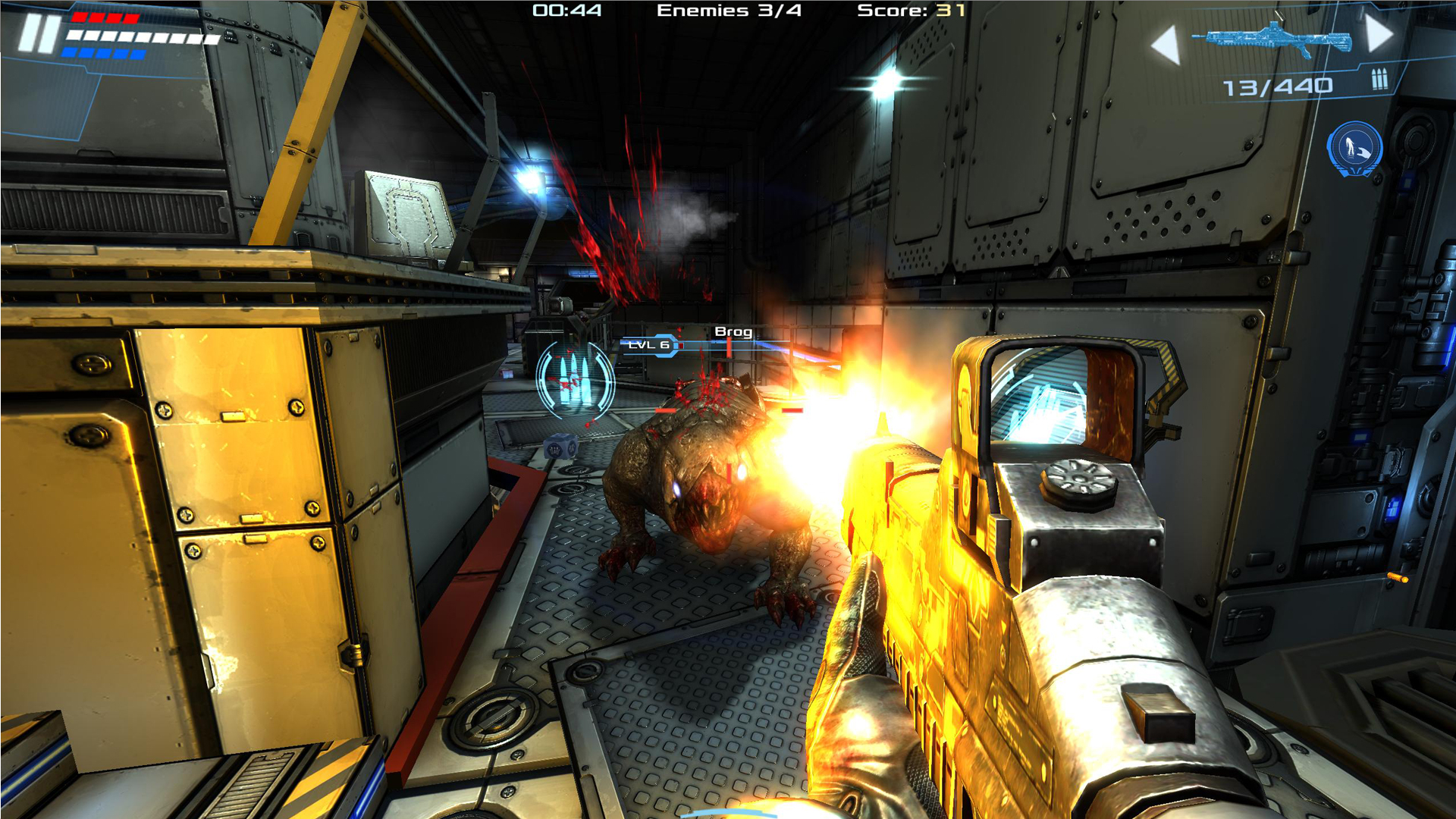 If we missed any great action games for Android, tell us about them in the comments! You can also click here to check out our latest Android app and game lists! 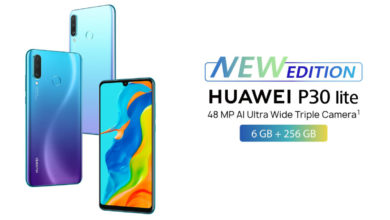 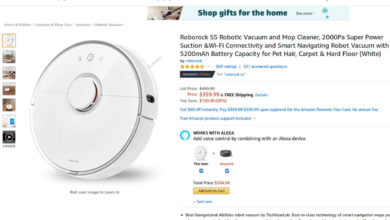 Roborock vacuums on sale for up to $150 off on Amazon

Huawei has immediately lost access to Android and Google