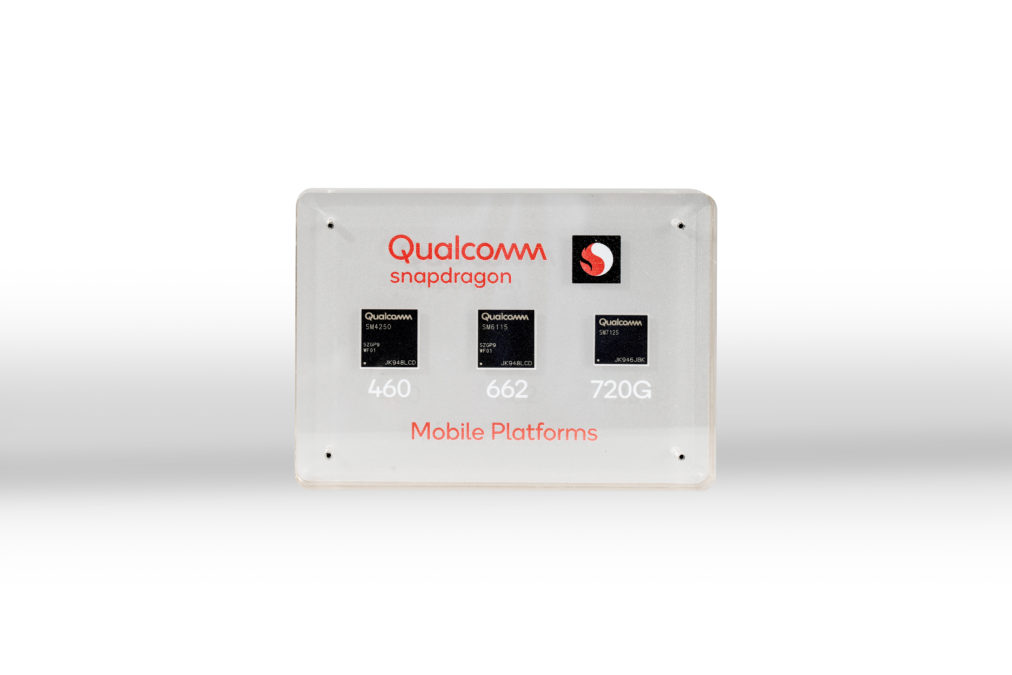 Following the launch of the flagship Snapdragon 865 and a series of high-performance, 5G options, Qualcomm is setting its sight at overhauling its entry-level and mid-range chipset portfolio.

The Snapdragon 460 represents a fairly big leap for entry-level smartphones. Qualcomm claims that the use of performance cores should help it gain a 70% leap in computing power. Meanwhile, the GPU from the 600 series of chipsets finds a place on the Snapdragon 460. This should have an impact for gamers on a budget since you’ll be able eke out a few more frames on more affordable phones. 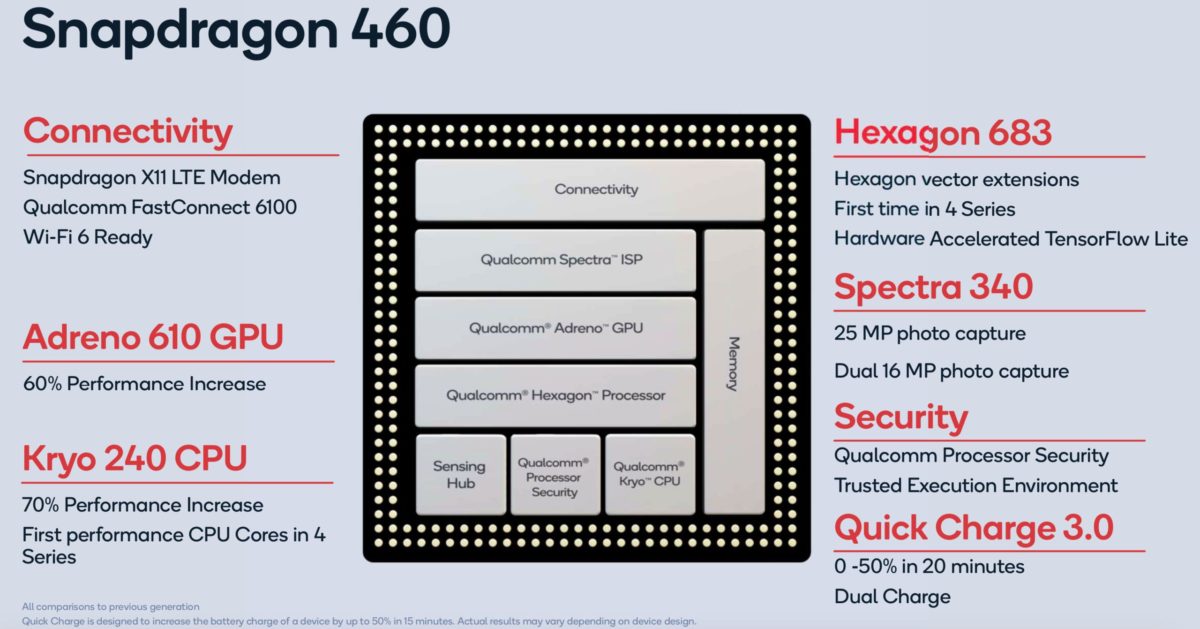 Elsewhere, the phone has a new Spectra 340 ISP which should allow for improved imaging. The Qualcomm Spectra 340 ISP enables up to a 25MP camera or dual 16MP modules. The configuration will let OEMs opt for a triple-camera set up as well but might have to compromise on the resolution.

Qualcomm claims that the chipset is WiFi 6 ready including support for FastConnect 6100 which is essentially a subset of features that are a part of Wi-Fi 6 compliance. It remains to be seen if the Snapdragon 460 series will spearhead the adoption of affordable Wi-Fi 6 enabled smartphones.

While the Snapdragon 460 will service the entry-level segment, I fully expect the Snapdragon 662 to become a mainstay of the mid-range segment once devices equipped with it start shipping towards the end of the year. 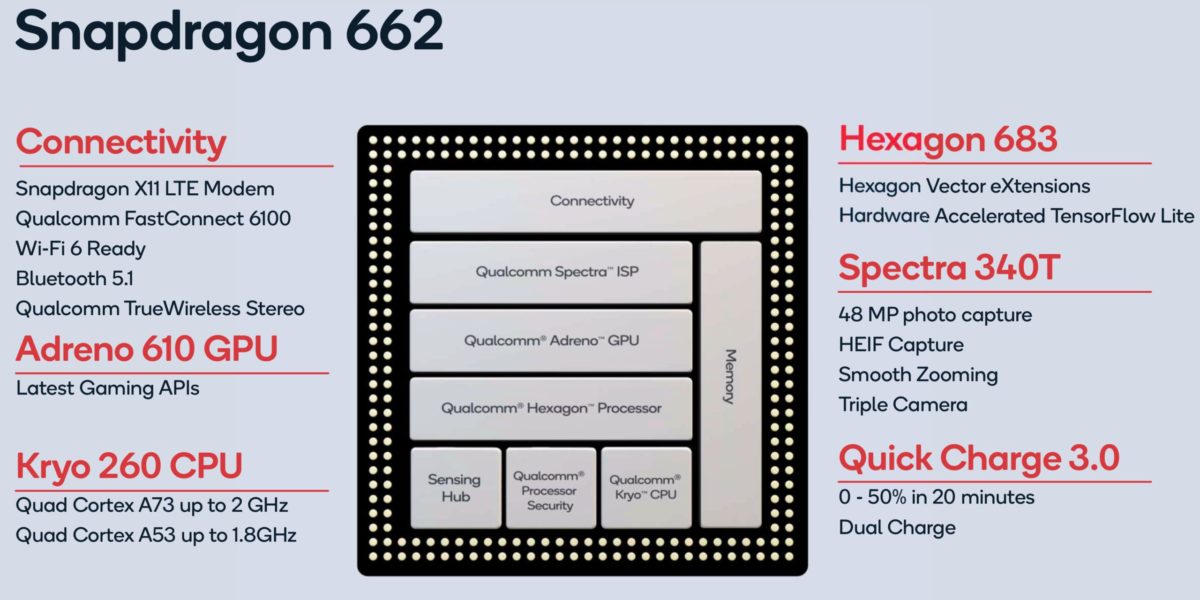 From a performance perspective, this is an octa-core chipset that pairs four Cortex A73 cores clocked at up to 2Ghz with four Cortex A53 cores that can run at up to 1.8GHz. This performance and efficiency combination is similar to what we’ve already seen on the Snapdragon 660. However, the 662 gains the better Adreno 610 GPU from the Snapdragon 665 to boost its gaming cred.

Bigger changes lie on the imaging front. The Spectra 340T ISP enables mainstays like a 48MP sensor, but also allows for HEIF capture which should go a long way in reducing file sizes of images. Additionally, the ISP allows for smooth switching between a triple camera setup to enable a camera-like user experience.

Connectivity is another area where Qualcomm has made large strides while working on the Snapdragon 662. Between Bluetooth 5.1, Qualcomm TrueWireless support, you can expect more reliable connectivity and longer range with next-gen wireless earbuds. The chipset is also Wi-Fi 6 ready, though we don’t know yet if this is just Fast Connect 6100 subset or full-blown Wi-Fi 6 support.

The Snapdragon 720G is positioned as a premium-tier chipset that should slot in right below the Snapdragon 730 that has found duty in phones like the Redmi K30. 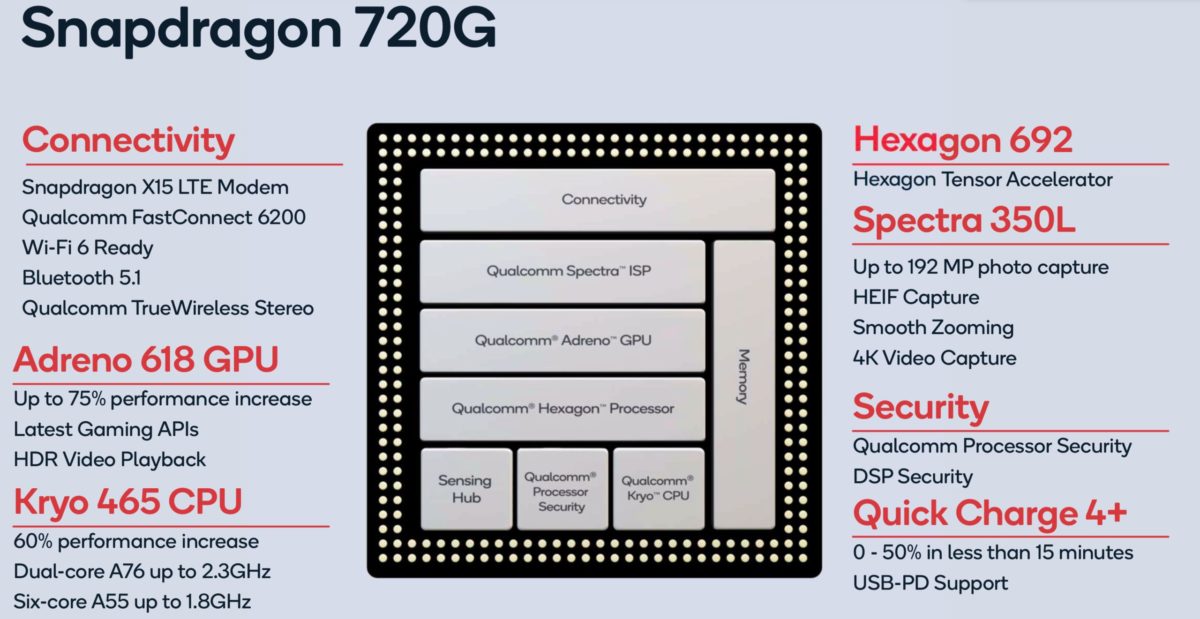 Positioned as an upgrade from the Snapdragon 710 series, it employs dual clusters of two Cortex A76 cores paired with six Cortex A55 cores. Combined with an improved Adreno 618 GPU, users can expect a significant leap in day-to-day as well as gaming performance over the Snapdragon 712.

Imaging is one of the key focus areas for Qualcomm and the 720G gets a Spectra 350L ISP that enables image capture at up to 192MP as well as HEIF support. There are improvements in the AI engine as well that should improve reliability and speed of access for virtual assistants.

Connectivity too, gets a step up, with the adoption of the Fast Connect 6200 platform as well as Wi-Fi 6 support. In addition, Bluetooth 5.1 and TrueWireless Stereo support guarantee a reliable and latency-free connection with the latest generation of true wireless earphones.

What does this mean for you?

While the world looks at a 5G-future, the fact of the matter is that 4G handsets and affordable handsets remain the company’s bread and butter. The Snapdragon 460, 662 and 720G bring tangible improvements to performance, imaging and local connectivity. All three are critical features in developing markets where mobile gaming and imaging-based applications are fast turning out to be key selling points for smartphones.

Qualcomm says that Snapdragon 720G based phones should be available started Q1 2020. Unfortunately, you’ve got a long wait ahead of you if you were looking for a new entry-level phone powered by the Snapdragon 460 or 662 platform. Those will ship towards the end of 2020.

The best Snapdragon 855 Plus phones 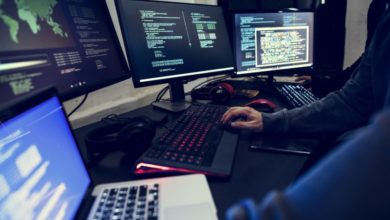