The Google I/O 2019 keynote is officially over, and — wow — is there a ton of stuff to dig into: new Pixel phones, the new Nest Hub Max, Google Assistant updates, and much, much more. You can read all about everything that was announced today right here.

But we know what you’re really here for — Google also announced Android Q Beta 3 at its developers conference, and you can install it right now. We’ve been digging into the third Android Q beta for a few hours, so let’s run through some of the significant changes and features in this update.

Also read: How to install Android Q Beta 3 on your phone: A step-by-step guide 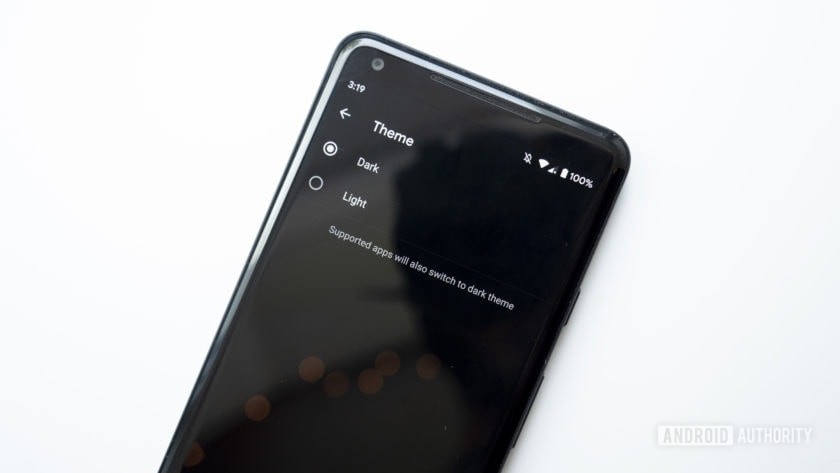 Google has played around with the idea of a system-wide dark theme for some time, and it’s finally here.

Just head into your display settings, select the theme option, then choose dark. This action will turn most sections of the Android OS entirely black — quick settings, the settings menu, home screen folders, the app drawer, and even some system apps like Google Calendar and Photos. This is true black, too, so your phone will benefit from the OLED display’s battery saving features.

Google added a quick settings tile so you can enable and disable it without the need to jump into the settings menu every time. Also, battery saver mode toggles the dark theme on if it’s not already enabled.

Likely the most user-facing change in Android Q Beta 3 is the new gesture navigation system.

Now, Android’s gestures are much more similar to iOS. In my opinion, that’s a good thing — gestures work great on the iPhone XS, and Android Pie’s gestures were always kind of wonky for me.

After enabling the new gestures (called “fully gestural navigation” in the system navigation settings), you’ll see only a long, thin navigation bar where your home button once was. It’s actually pretty easy to use:

I got it down after using the new gesture system for only a few minutes. It’s pretty intuitive, though still a little buggy (this is a beta, after all).

However, the new back gesture (swipe in from either edge of the device) poses a peculiar problem: Tons of apps — including Google’s own apps — have navigation drawers on the left side that typically hold additional settings. You usually access these drawers by swiping in from the left edge of the screen. With this new gesture system, that’s broken. You can no longer swipe to open these navigation drawers; the system overrides the app’s settings and recognizes the gesture as “back.”

It’s a little annoying right now, but luckily this is just a beta. We expect to fix this in a future beta release.

In this new build, you can now choose between the new “fully gestural navigation” system, Android Pie’s two-button navigation, and the older three-button navigation. We’re hoping this sticks around, and we know you’re excited about it too.

Google’s Smart Reply feature aims to offer up suggestions on what it thinks you’d like to say, allowing you — in some cases — to reply to a message with just a single tap. It’s convenient in apps like Messages and Gmail. Going forward, Smart Reply will be available in apps like Facebook Messenger, Signal, and other third-party apps.

What’s more, Google announced a new feature called Suggested Actions, which are like Smart Reply messages on steroids. As an example, if a friend sends you a message with an address in it, you won’t just see a text reply option — your phone will show you a suggestion to “open maps,” allowing you to jump right into Google Maps to see that location.

The best part is that all of these Smart Reply and Suggestions Actions features take place on-device, so this information isn’t being sent to Google. In fact, Google only sees the data that it needs to complete the action.

I haven’t been able to get this to work on my Pixel 2 XL, but your mileage may vary.

Focus Mode: Preventing you from opening apps when you don’t need to

Time for a time out? With Focus Mode, you can get things done distraction free by selecting the apps you want to stay active and pausing everything else you don’t. #io19 pic.twitter.com/Pq74lnsUU3

Google is beefing up Digital Wellbeing in Android Q with a new feature called Focus Mode.

The whole point of Digital Wellbeing is to get you to stop using your phone when you really shouldn’t be using your phone. Focus Mode makes it even easier to do so. Here’s how it works: Select a list of predefined apps that you know to tend to distract you. When Focus Mode is turned on, it’ll grey out all of those apps on your phone and stop you from opening them unless you turn Focus Mode off.

This is another feature we weren’t able to try out yet. It’s rolling out to Android Pie and Android Q devices later this fall.

Live Caption: The most important accessibility feature in awhile

One of the most impressive announcements at Google I/O is a feature called Live Captions. Once activated, it adds captions to any media that plays on your phone — whether it’s a video, song, podcast, or even a live call with Google Duo. Just activate Live Captions from your phone’s volume controls, and it’ll immediately add captions to whatever media is playing on your phone.

The best part? This all happens on-device, so you don’t need an internet connection to make it work. It’s crazy.

Unfortunately, we also weren’t able to try this feature out, but we really can’t wait to.

The Android Q features we can’t show you

I know I cheated a bit and included a few features I wasn’t able to test out yet. There are a ton of other features coming to Android Q that I can’t show you, so be sure to read about them here:

You’ll get to use Android Q sooner than before

Odds are, you’ll get to test out Android Q much sooner than previous versions of Android. Google announced today that the third Android Q beta is rolling out to 21 non-Pixel devices from 13 OEMs. You can see the full list here.

Whichever company made your phone, there’s a good chance you’ll get the stable Android Q update quicker than ever before. Google just announced that Android Pie is installed on 10.4 percent of Android devices — a 2.5-percent increase from last year. That means we can expect the same results, if not better, for Android Q’s stable release.

Next: Google Pixel 3a XL review: Come for the camera, stay for the experience