Home » Gaming » Best phablets of 2019: Super-size your display with these big phones

Best phablets of 2019: Super-size your display with these big phones 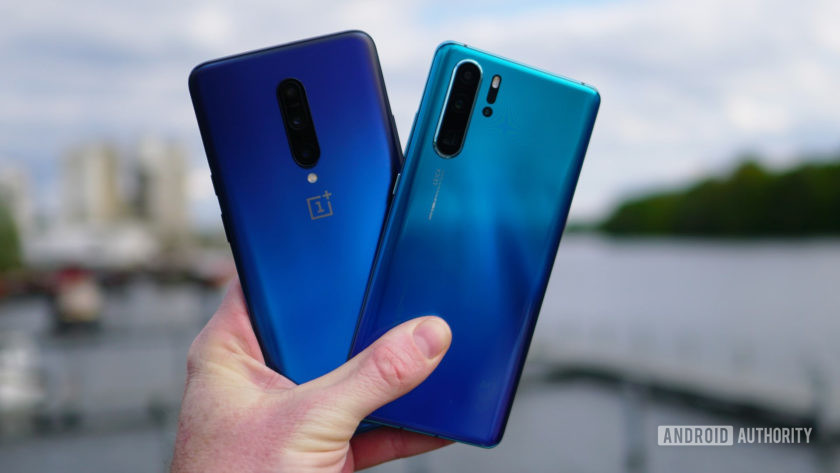 The definition of a phablet has changed over the years, starting with 5-inch phones at first. But a 5-inch device is on the small size these days, with 6-inch phones all very common thanks to tall aspect ratios. Nowadays, we consider a phablet to have a 6.3-inch screen or larger, so with that in mind, this is our list of the best phablets.

Editor’s note: We will be updating this list of the best phablets regularly as new devices launch.

The P30 Pro is the best Huawei phone at the moment. It sports a large 6.47-inch QHD+ screen with curved edges, similar to the ones found on the Galaxy S10. It’s powered by the latest Kirin 980 chipset, has an in-display fingerprint sensor, and a massive 4,200mAh battery that supports wireless charging.

What makes it special is its cameras. At the back, the phone features a high-resolution 40MP standard lens, a 20MP wide-angle lens, and an impressively engineered 5x optical periscope lens at 8MP. There’s also a ToF 3D camera on board. The camera setup takes great pictures, especially in low-light conditions. You can check out dedicated P30 Pro camera review at the link to see some samples.

The display on the Galaxy S10 Plus measures 6.4-inches, is curved on the sides, and has a resolution of QHD+. It has a cutout in the upper-right corner, which houses the front-facing dual-camera setup. It’s better than a notch in our opinion, but we’re also seeing pop-ups and slider designs that arguably offer a more visually impressive design.

The Galaxy S10 Plus is not only one of the best phablets out there, but it’s also one of the best phones you can get in general. It packs top-of-the-line specs including the Snapdragon 855/Exynos 9820 chipset, up to 12GB of RAM, and a large 4,100mAh battery. The phone is also IP68 rated, has a headphone jack on board, and supports wireless charging as well as reverse wireless charging.

Of course, all these specs and features translate to a high price tag. The Galaxy S10 Plus starts at $1,000, with the high-end version featuring 12GB of RAM and 1TB of storage setting you back $1,600.

If you want to go even larger, there’s also the Samsung Galaxy S10 5G with a huge 6.7-inch display, 5G support, and ToF cameras on the front and rear.

What makes the Xiaomi Mi 9 one of the best phablets out there is a combination of high-end specs, a great design, and an affordable price tag. The phone’s Full HD+ screen comes in at 6.39-inches (just cracking our definition for a phablet) and has a small waterdrop notch on top.

You can fully charge the Mi 9’s battery in around 65 minutes.

The Xiaomi Mi 9 is powered by the latest and greatest Snapdragon 855 chipset and sports three rear cameras (normal/wide/telephoto). It also comes with an in-display fingerprint sensor, wireless charging, and a 3,300mAh battery that can go from zero to 100 percent in around 65 minutes.

The global version of the phablet comes with 6GB of RAM and 64 or 128GB of storage, while users in China also get variants with 8 or 12GB of RAM and as much as 256GB of storage. Pricing starts at 450 euros, which translates to around $500.

The entry-level model comes with 128GB of storage, while the beefed-up variant has 512GB of space. There’s also a microSD card slot on board, allowing you to increase the storage for an additional 512GB. The Note 9 has a dual rear camera setup (12MP dual aperture, 12MP telephoto) packs a massive 4,000mAh battery, and is IP68 rated for protection against water and dust. It also comes with the S Pen, which now supports Bluetooth Low Energy (BLE) that lets you control the handset’s camera with the button on the stylus.

The 128GB Galaxy Note 9 was available for $1,000 at launch, while the 512GB model retailed for a whopping $1,250. But you can get the device for a cheaper price now that the Galaxy S10 series is available. Expect it to drop even more when the Galaxy Note 10 is announced.

The Huawei Mate 20 X is essentially a larger, somewhat cut-down version of the Mate 20 Pro. It shares plenty in common with the Pro model, including the Kirin 980 processor, the same 40MP/16MP/8MP triple rear camera, and that 24MP selfie shooter.

The Mate 20 X has the biggest screen on our list.

It’s not all bad though, because the Mate 20 X offers a massive 7.2-inch display with a waterdrop notch, and a 5,000mAh battery. Meanwhile, the Mate 20 Pro delivers a 6.39-inch screen with a wide notch, and a 4,200mAh pack. You’re also looking at 6GB of RAM, 128GB of expandable storage (albeit via NM cards), and a $699 price tag. So if you want a powerful phone with a big battery, massive screen, and reasonable price tag, this might be for you.

The OnePlus 7 series marks the first time that OnePlus launched a standard and Pro model, and the OnePlus 7 Pro has one of the best displays you’ll see all year.

How much faster is the OnePlus 6T McLaren’s Warp Charge 30?

One of the OnePlus 6T McLaren Edition’s key differentiators from its regular sibling, other than the $70 price difference, is the introduction of 30W “Warp Charge 30” technology. This speedy bit of tech promises to power …

OnePlus’s Pro variant offers a 6.67-inch OLED screen that’s larger than the OnePlus 6T and OnePlus 7 screen, but it also delivers a notch-free design thanks to a 16MP pop-up selfie camera. Toss in a QHD+ resolution and 90Hz refresh rate and you’ve got a very slick experience.

Need a phablet with pure Android and fast updates? Then you can’t go wrong with the Google Pixel 3 XL, which sports a 6.3-inch display and a gigantic notch. It’s also one of the best — if not the best — phones for photography, despite only having a single camera at the back. It takes fantastic photos, even in low light, thanks to Google’s Night Sight technology.

What makes the Google Pixel 3 XL one of the best phablets is its fantastic camera and a great software experience.

The phone also offers high-end specs including a Snapdragon 845 SoC, 4GB of RAM (a bit on the low side in 2019), and wireless charging. The Active Edge feature is also on board, which lets you launch Assistant by squeezing the edges of the phone.

The Pixel 3 XL doesn’t have a headphone jack, which isn’t surprising but still worth noting. The entry-level version with 64GB of storage goes for $900, while the 128GB variant can be yours for $1,000.

The 2019 Asus flagship might be the biggest surprise of 2019, delivering a Snapdragon 855 processor, cool flip camera system (the 48MP main and 13MP ultra wide cameras serve as your selfie cameras too), and an attractive price tag.

The Zenfone 6 earns its phablet status by way of a 6.4-inch IPS LCD screen, offering a FHD+ screen resolution. This is a notch-free design too, owing to the flip camera housing. Many great phablets also offer a large battery, and the Zenfone 6 is no different, offering a 5,000mAh pack for your convenience.

Other notable specs here include 6GB or 8GB of RAM, 64GB or 256GB of expandable storage, a headphone jack, and a dedicated shortcuts button. The Asus Zenfone 6 starts at just $499, making it one of the cheaper flagship phablets of 2019.

These are the best phablets you can currently buy in our opinion, although there are plenty of other great models to choose from. These include the Redmi K20 Pro, Sony Xperia 1, ZTE Axon 10 Pro, and LG V40 ThinQ. We’ll be updating this list with more top phablets when new devices hit the market.