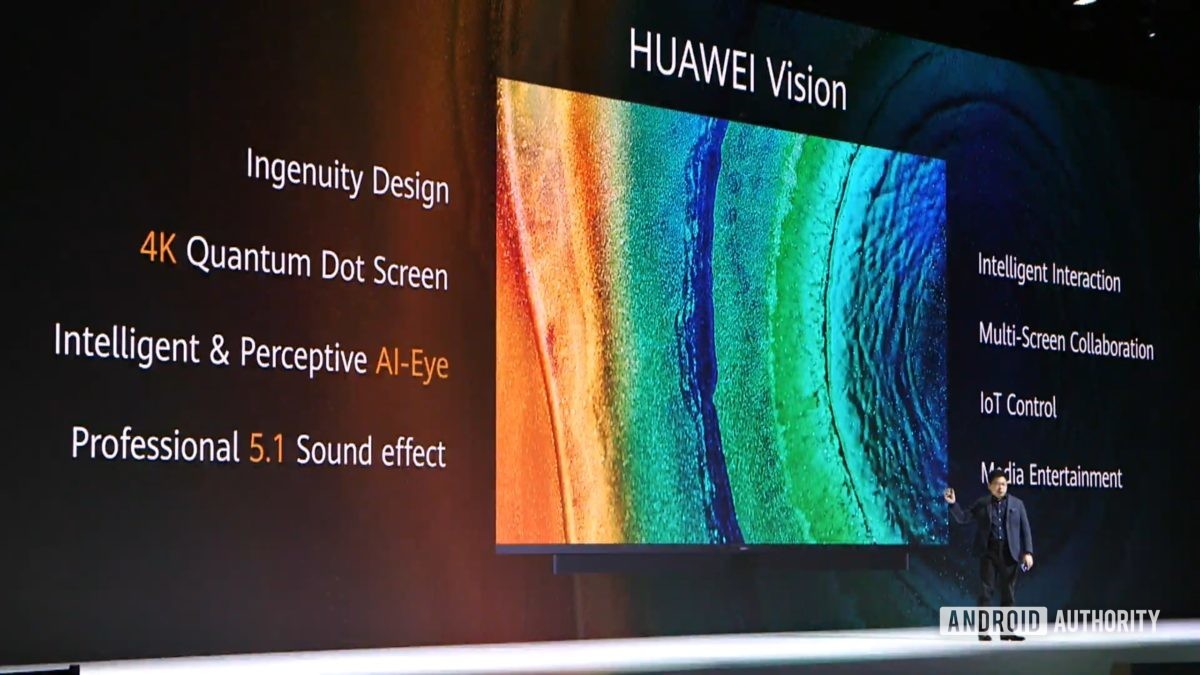 Launched in China earlier this year, Huawei is bringing the Huawei Vision TV to Europe. Alongside the headlining Huawei Mate 30 Pro and Mate 30 announcements, the company took to the stage to talk about their new television.

The Huawei Vision TV is the first product to Europe with Harmony OS out of the box. The open-source platform has been designed to work across all kinds of devices, including smartphones and wearables. The television integrates with HiLink, the company’s IOT platform to serve as a control center for the 900+ devices that work with the platform. There’s a lot of cross integration going on here, and you’ll be able to easily share and broadcast content from your phone to the big screen.

Huawei will initially offer the television in 65-inch and 75-inch variants, with 55-inch and 85-inch models to follow. There’s a 4K quantum dot panel here, as well as eight speakers and a dedicated subwoofer. You probably won’t need to shell out for a soundbar with this one.

Oddly enough, there’s even a pop-up selfie camera, making the Huawei Vision TV feel a bit more like a giant smartphone than your typical TV. The Honor Vision’s camera is paired with a dedicated NPU chipset to enable additional functions like face recognition as well as skeletal joint recognition. Think switching over to custom user profiles based on whoever is watching the television, or even Kinect style games.

The Huawei Vision TV runs on Huawei’s homegrown Hongshu 818 chipset. The octa-core chipset powers the entire range of DSP functions including MEMC for frame interpolation. It’ll also handle the standard range of HDR, noise reduction and imaging functionality. The powerful chipset is a step above the run-of-the-mill silicon we usually see in televisions.

It is interesting to see more and more smartphone brands get into the television space. We’re still waiting on pricing and exact release info for the Huawei Vision TV, but if the company manages to tightly integrate the smartphone and television experience, this could be one to watch out for.