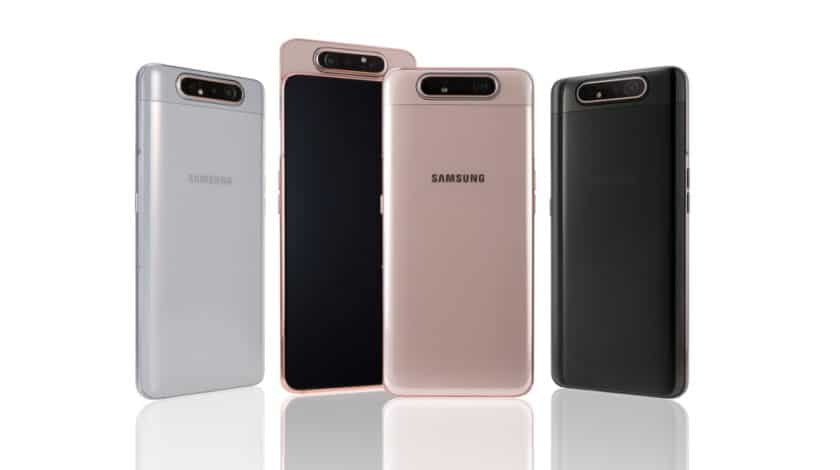 Yesterday, Samsung revealed the Samsung Galaxy A80 smartphone, one of the newest entries in its mid-range “A” line. The A80 features a very unique pop-up swivel camera which allows the front of the device to be all display from top to bottom.

If you missed the news making the rounds yesterday, the GIF of the Galaxy A80’s camera doing its thing is pretty awesome (and slightly hypnotic). I’ll be the first to admit that I’ve never seen anything like it before (with the Oppo N3 being the closest thing to it), and that’s always exciting.

Here, check it out for yourself:

As cool as this flippy little camera system is on the Samsung Galaxy A80, I can’t help but feel it’s a distraction. Unfortunately, although Samsung figured out a way to add in this really neat feature, it also figured out a way to remove two of the most-loved features of every flagship Samsung smartphone.

The two things I’m referring to are the microSD card slot and the 3.5mm headphone port. Both of these features are missing from the Galaxy A80.

Goodbye to the microSD slot and headphone port

At first blush, the removal of the microSD slot might not be too big of a deal. After all, a few smartphone manufacturers have removed the port from devices over the past few years. OnePlus did away with the microSD slot entirely in 2016 with the release of the OnePlus 3, and none of Google’s Pixel devices have ever had the port, for example.

A few years ago, phones with expandable memory were starting to become a dying breed. However, while not every device may have it, this feature is certainly far from going completely away. There are still …

However, the fact that other OEMs are removing the microSD slot likely makes Samsung fans that much more attached to it. The family of Samsung Galaxy S10 devices along with the Samsung Galaxy Note 9 all feature the port, and even Samsung’s other recent entries in its A-series — including the Samsung Galaxy A40, A50, and A70 — all have a microSD slot. With that in mind, the Galaxy A80 does seem like quite the anomaly in this regard.

Still, as internal storage on smartphones gets ever-larger, the removal of expandable storage might not be a deal-breaker, even for hardcore Samsung fans.

However, the 3.5mm headphone port certainly is a deal-breaker for the majority of Samsung die-hards.

Taking away the microSD slot might not be the end of the world, but taking away the headphone port is likely going to cause some backlash.

While a handful of manufacturers have set aside the microSD slot, it seems nearly every major company has released at least one flagship device without a headphone port, including Huawei, OnePlus, Google, Xiaomi, Motorola, Sony, HTC, Oppo, and, of course, Apple. Samsung has kept it, though.

Among a sea of companies all willingly ditching one of the most-loved features of a smartphone, Samsung is the one company that’s held out. However, here we are with a brand new device at the top of its mid-range class and it is missing the port.

Granted, the Samsung Galaxy A80 is a mid-ranger and there are plenty of Samsung fans who likely wouldn’t buy it anyway, regardless of how cool its camera is. However, is the lack of a headphone port on this phone a sign of what’s to come?

Is this Samsung softly introducing us to the end of the 3.5mm port?

As stated before, Samsung’s latest round of flagship devices in the Samsung Galaxy S10 family all have both expandable storage and a headphone port. However, there’s another flagship device on the way: the Samsung Galaxy Note 10 (which may or may not be what it’s called). Is it possible that Samsung is slowly weaning us off the headphone port with the Galaxy A80 in preparation to drop the bomb that the Note 10 won’t have it either?

The Samsung Galaxy A80 is a mid-ranger, and thus will have limited appeal. It certainly won’t sell at the same level as the Galaxy S10. The Galaxy Note line, however, is one of Samsung’s most important brands and one of its biggest sellers. If the company decides to remove the headphone port from the Note 10, how will Samsung fans react?

The best phones with a headphone jack (April 2019)

Trends are made for bucking, and no trend calls for more bucking than the disappearance of the headphone jack. There are so many headlines these days about phones losing their headphone jacks, courtesy of the …

It’s incredibly unlikely the Galaxy Note 10 will feature this flippy camera mechanism, so there won’t be anything to distract us from a missing headphone port on the Note 10. My hunch is that the backlash to the hypothetical removal of the headphone port on the Note 10 would far outmatch the rampage of OnePlus fans when it was revealed that the OnePlus 6T wouldn’t have the port. We’re talking a backlash of biblical proportions.

Maybe Samsung knows that and will keep the headphone port on all its flagships, only removing it from devices in its mid-range. Or, maybe, the Galaxy A80 is a quick test run to see if Samsung fans will negatively react to the removal of major features if given a shiny new feature to look at.

I can only hope, for Samsung’s sake, that it’s the former and not the latter.

NEXT: Specs comparison: All of the Samsung Galaxy A smartphones