Today’s teens missed the Foursquare era, so Snapchat is giving them another shot with a new feature to aid in-person meetups. Snapchat is now testing Status, an option to share to the Snap Map a Bitmoji depicting what you’re up to at a certain place. You could show your little avatar playing video games, watching TV, asking friends to hit you up and more. And Snapchat will compile these into a private diary of what you’ve been doing, called Passport

This fixes the biggest problem with Snap Map and many other location check-in apps. Just because someone is down the street doesn’t mean they want you to drop in on them. They could working, in a meeting or on a date. Snapchat Status lets people convey their activity and intention so you can tell the difference between “I’m nearby but stuck with my parents” and “I’m nearby and want to hang out!” As Snapchat refocuses on messaging after Instagram stole its Stories thunder, Status could ensure there’s more to see that makes Snap Map worth opening. 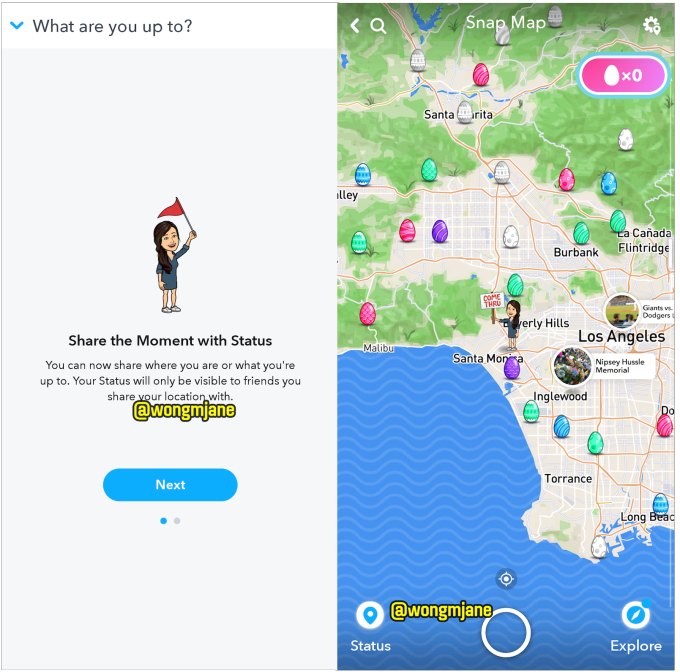 Snapchat Status and Passport were first spotted by reverse-engineering expert and frequent TechCrunch tipster Jane Manchun Wong. “Share the Moment with Status,” the introduction to the feature explains. “You can now share where you are or what you’re up to. Your Status will only be visible to friends you share your location with.” To see your status, you choose from reams of poses for your Bitmoji ranging from them reading a book to holding a sign saying “text me?”

Meanwhile, “Passport is Just For You: Passport helps you keep track of the Places you’ve been. Places you set your Status at will be added to your Passport along with who you were there with. Only you ca see your Passport, and you can delete a Place from your history at any time.” Your Status only lasts until you leave a place, but it’s tallied along with the number of countries and cities you’ve check into on your Passport.

A Snap spokesperson confirms that “Yes, we are currently testing new ways for Snapchatters to better communicate on the Snap Map with their friends. This test is running with a percentage of Snapchatters in Australia.” Previously, special Bitmoji were only displayed on the Snap Map involuntarily, like when you were road tripping or flying to a new place; visited somewhere special like a beach, mall or major event; or if there was a breaking news moment.

If you don’t want to use Status or even show up on Snap Map, you can go into ghost mode at any time, plus all your location-based content disappears if you don’t open the app for eight hours. And if you do want to be found, you can check who’s viewed your location or Status in case you need to know who’s blowing you off.

Snap launched Snap Map back in June 2017, basing the idea off its acquisition of French location startup Zenly that it bought for $213 million in cash plus bonuses. Beyond spurring real-world interaction, Snap has also made Snap Map an embeddable way to explore breaking news events or hotspots around the world. Status could provide structured data about your behavior, which could beef up Snapchat’s scrawny repository of ad-targeting information. The app could even try surfacing nearby businesses or discounts.

Snapchat’s tighter-knit social graph and stronger track record on privacy lets it offer features that would freak people out if built by Mark Zuckerberg. Given Facebook is aggressively cloning Snap’s whole product philosophy, from its direct copy of Stories to ephemeral messaging to its premium content hubs Watch and IGTV, Snapchat desperately needs to differentiate. Luckily, Facebook has failed to figure out offline meetups, and has yet to roll out the “Your Emoji” status feature that similarly tries to convey what you’re up to visually but within Messenger instead of a map.

Doubling down on Snap Map is a smart move because its one of the few areas where Facebook can’t follow.