Less than six months after it announced $40 million in funding, Attentive has raised another $70 million — this time in Series C funding.

The new round was led by Sequoia and IVP, two firms that were part of the Series B. Previous investors Eniac Ventures and NextView Ventures also participated.

CEO Brian Long (who, along with his Attentive co-founder Andrew Jones, sold his previous startup TapCommerce to Twitter) told me that he wasn’t planning to raise money again so soon, but things were going even better than expected, with a client list that has grown to more than 750 businesses, including Coach, Urban Outfitters, CB2, PacSun, Party City and Jack in the Box.

Long noted that it’s always smarter to raise money when things are going swimmingly, rather than dealing with the “not-so-fun process” of trying to raise “when you really need it.”

He added, “When you see that you’re doing that well, you think, ‘Hey, we should hire a lot more people to support this growth.’ And then the other piece is just being able to move faster into new areas.” 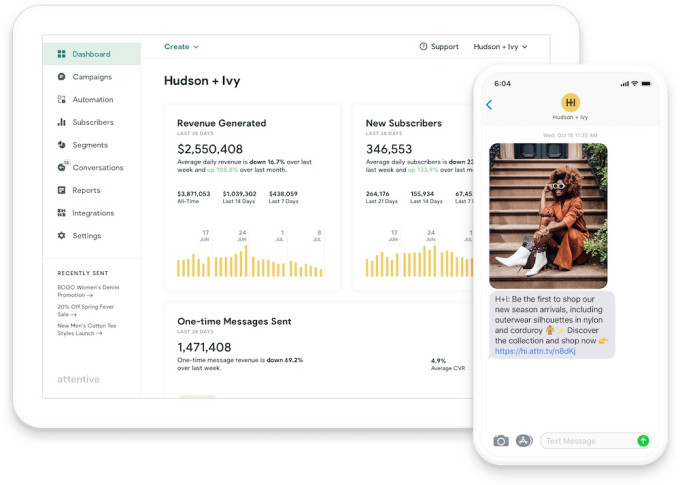 Long attributed the success Attentive has had thus far to the growing importance of text messages as a channel for businesses to reach consumers, particularly as those consumers are less inclined to open marketing emails or download retailers’ mobile apps. And in contrast to broader messaging platforms, Long said Attentive is “focused on just doing this channel right.”

He said the platform is designed to solve the main problems faced by retailers trying to build a mobile messaging strategy — first, by helping them create a text subscriber list in a way that complies with regulations, then by offering “the ability to send messages that frankly aren’t going to piss people off.”

“We want the messages to be relevant for the consumer, we want to send them things that they care about,” Long said. “The package is on the way, real-time customer service, a product that you were looking at recently is on-sale … there’s a lot of data that you can put to work in order to do it at scale.”

Looking ahead, he hopes to expand beyond the United States and Canada, and to move into industries beyond e-commerce — for example, into more traditional retail, and also to start working with colleges that are looking to attract more applicants.

“Attentive’s growth is a clear indication that people want to interact with brands in new ways, and brands are embracing messaging as an effective way to reach consumers,” said Sequoia partner Pat Grady in a statement. “We are thrilled to double down on our partnership with Attentive so they can continue to deliver fantastic results for their customers and valuable experiences for consumers.”

Attentive has now raised a total of $124 million.