If you have Apple’s old AC wall adapter for the U.K., H.K., or Singapore, you should get it exchanged now.

Apple is recalling an AC wall plug adapter mainly used in the U.K., Hong Kong, and Singapore, included with devices between 2003 and 2010, as well as in the company’s Apple World Travel Adapter Kit.

Apple today announced a voluntary recall of AC wall plug adapters designed for use primarily in Hong Kong, Singapore and the United Kingdom. In very rare cases, affected Apple three-prong wall plug adapters may break and create a risk of electrical shock if touched. These wall plug adapters shipped with Mac and certain iOS devices between 2003 and 2010 and were also included in the Apple World Travel Adapter Kit. Apple is aware of six incidents worldwide.

The recall does not affect any Apple USB power adapters.

Because customer safety is a top priority, Apple is asking customers to stop using affected plug adapters. Customers should visit apple.com/support/three-prong-ac-wall-plug-adapter for details about how to exchange them for new adapters.

An affected three-prong plug adapter is white, with no letters on the inside slot where it attaches to the main Apple power adapter. See website for more details and images to identify an affected adapter.

This is what the affected adapter looks like. Get it exchanged ASAP: 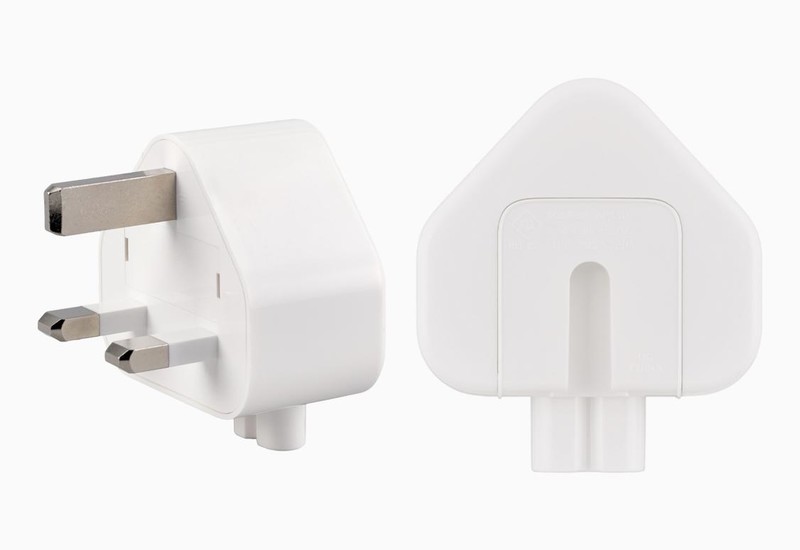 This is what the new, replacement adapter looks like. if you have this one, you’re golden:

Note the thinner profile and the capsule-shaped indent along the side, which should help anyone with visual accessibility needs.

Sometimes when these things happen, some people decide to hang onto an affected unit in hopes it will somehow be cool or become a collector’s item. Don’t do that. Time passes. People forget. A family member or friend finds it and tries to use it. And if something happens, it’s on you.

Six incidents worldwide aren’t many when you look at Apple’s customer base, but no one should willingly become the seventh.