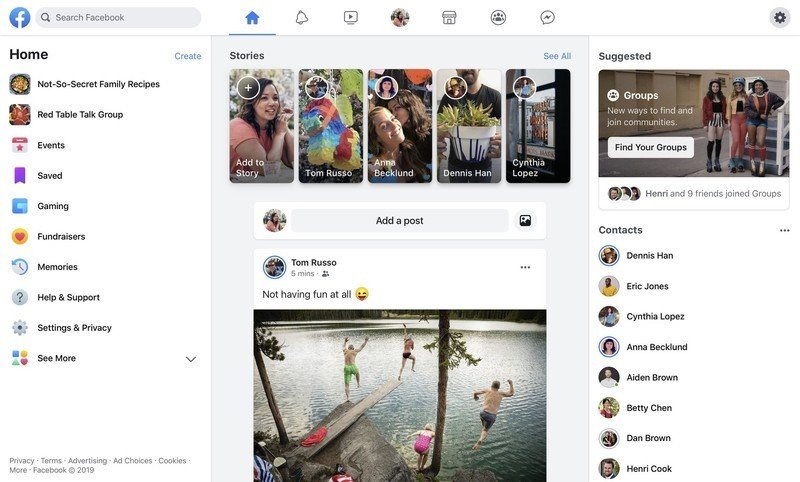 It will launch fully in the Spring, and right now a small handful of users can test “The New Facebook.”

Facebook is beginning the rollout of its redesigned desktop web interface, complete with a new Dark Mode.

As reported by CNET, the new design, originally announced in April, will be available “broadly sometime in the spring,” and as of right now a few select users can test out the feature:

In the meantime, when the “small percentage” of people who can access this new feature sign in to Facebook for the first time, they’ll see a pop-up inviting them to help test what the company calls “The New Facebook.” If they agree, Facebook will let them either set the website to use white backgrounds and bright colors, or a dark-mode background similar to the popular features offered on computers, iPhones and devices powered by Google’s Android software

According to Facebook, the emphasis of the new design is on communities, back in April it said:

We just announced a fresh, new design for Facebook that makes communities as central as friends. FB5 is simpler, faster, more immersive and makes it easier to find what you’re looking for and get to your most-used features.

A lot of these updates have been pushed to Facebook’s mobile apps since that announcement, and as CNET notes will make their way to the desktop version of Facebook “broadly sometime in the spring.” According to the report, anyone who agrees to use the redesigned website will be able to switch back to the old standard look. They can also give Facebook feedback about specific features or their general feelings on the overhaul.

Check out this closer look at FB5, complete with a sneak peek at Dark Mode!