Say hello to Microsoft’s new $3,500 HoloLens with twice the field of view

Microsoft unveiled the latest version of its HoloLens ‘mixed reality’ headset at MWC Barcelona today. The new HoloLens 2 features a significantly larger field of view, higher resolution and a device that’s more comfortable to wear. Indeed, Microsoft says the device is three times as comfortable to wear (though it’s unclear how Microsoft measured this).

One of the knocks against the original HoloLens was its limited field of view. When whatever you wanted to look at was small and straight ahead of you, the effect was striking. But when you moved your head a little bit or looked at a larger object, it suddenly felt like you were looking through a stamp-sized screen. HoloLens 2 features a field of view that’s twice as large as the original. 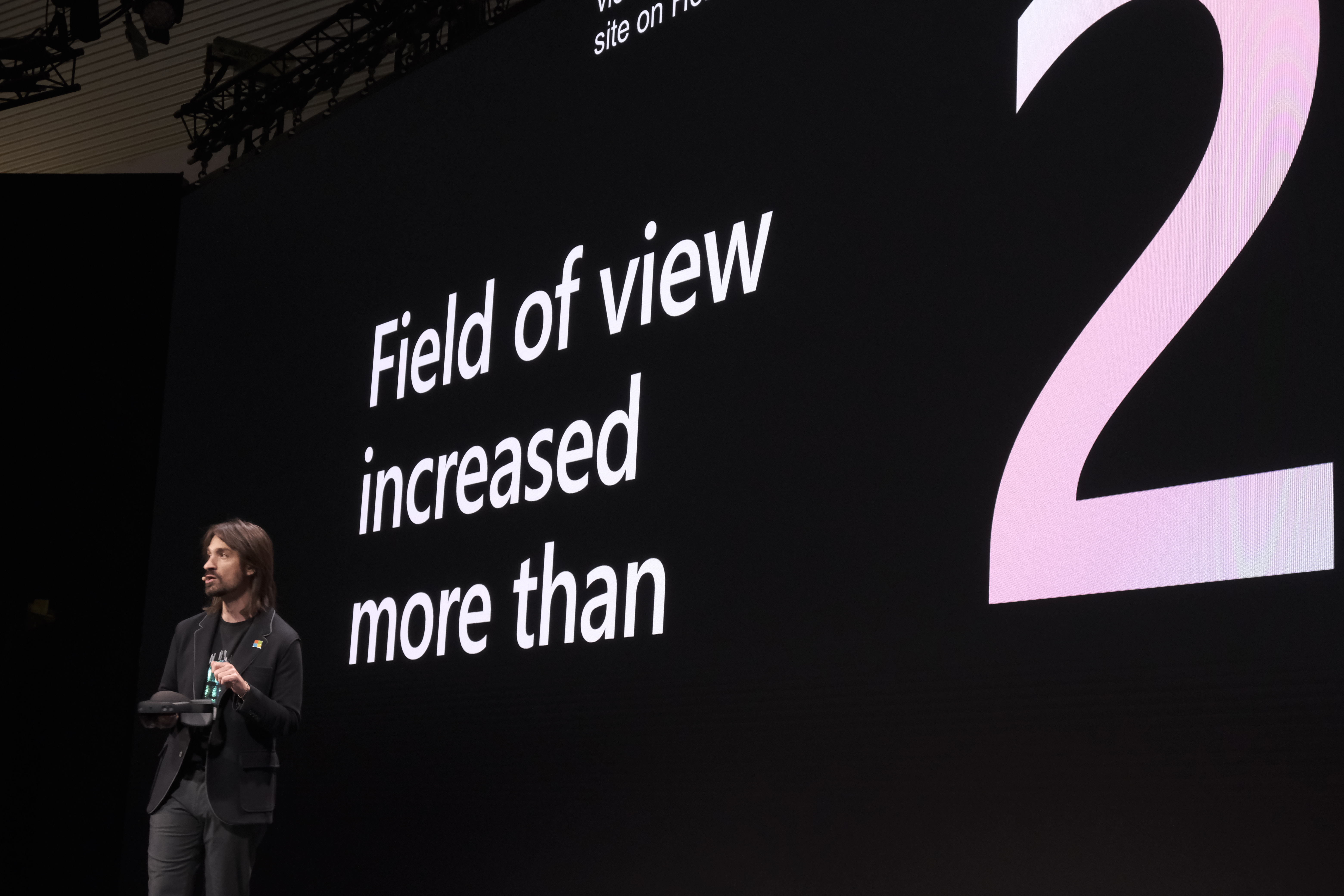 “Kinect was the first intelligent device to enter our homes,” HoloLens chief Alex Kipman said in today’s keynote, looking back the the device’s history. “It drove us to create Microsoft HoloLens. […] Over the last few years, individual developers, large enterprises, brand new startup have been dreaming up beautiful things, helpful things.”

The HoloLens was always just as much about the software as the hardware, though. For HoloLens, Microsoft developed a special version of Windows, together with a new way of interacting with the AR objects through gestures like air tap and bloom. In this new version, the interaction is far more natural and lets you tap objects. The device also tracks your gaze more accurately to allow the software to adjust to where you are looking.

“HoloLens 2 adapts to you,” Kipman stressed. “HoloLens 2 evolves the interaction model by significantly advancing how people engage with holograms.”

In its demos, the company clearly emphasized how much faster and fluid the interaction with HoloLens applications becomes when you can use slides, for example, by simply grabbing the slider and moving it, or by tapping on a button with either a finger or two or with your full hand. Microsoft event built a virtual piano that you can play with ten fingers to show off how well the HoloLens can track movement. The company calls this ‘instinctual interaction.’

Microsoft first unveiled the HoloLens concept at a surprise event on its Redmond campus back in 2015. After a limited, invite-only release that started days after the end of MWC 2016, the device went on sale to everybody in August  2016. Four years is a long time between hardware releases, but the company clearly wanted to seed the market and give developer a chance to build the first set of HoloLens applications on a stable platform.

To support developers, Microsoft is also launching a number of Azure services for HoloLens today. These include spatial anchors and remote rendering to help developers stream high-polygon content to HoloLens.

It’s worth noting that Microsoft never positioned the device as consumer hardware. I may have shown off the occasional game, but its focus was always on business applications, with a bit of educational applications thrown in, too. That trend continued today. Microsoft showed off the ability to have multiple people collaborate around a single hologram, for example. That’s not new, of course, but goes to show how Microsoft is positioning this technology.

For these enterprises, Microsoft will also offer the ability to customize the device.

“When you change the way you see the world, you change the world you see,” Microsoft CEO Satya Nadella said, repeating a line from the company’s first HoloLens announcement four years ago. He noted that he believes that connecting the physical world with the virtual world will transform the way we will work.