Huawei P30 Pro vs Mate 20 Pro: Is the better camera worth it?

The Huawei P30 Pro is the photography king of 2019 (so far). With four cameras and a massive arsenal of advanced features, it’s flashy enough to make you forget about Huawei’s other flagship, the six-month-old Mate 20 Pro.

The Mate 20 Pro has almost the same features as the P30 Pro, except for the super advanced camera. On paper, the newer phone should comfortably win, but the Mate 20 Pro could be the better choice for most people due to one simple reason: it’s cheaper. 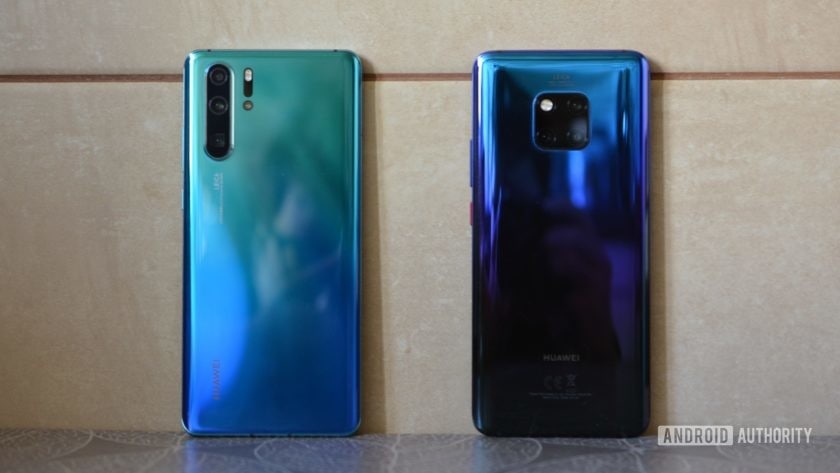 The Mate 20 Pro and P30 Pro are Huawei’s latest flagship phones. Released every fall, phones in the Mate series tend to offer the best performance and the latest technology from Huawei. Effectively, the Mate is Huawei’s answer to the Galaxy Note. The P series, meanwhile, is designed to counter the Galaxy S line, with one big twist — a strong focus on photography. Phones in the P series are typically built on the same platform as the previous year’s Mate.

P series phones used to be smaller than Mates, but the trend towards larger screens has chipped away at the difference. This year, the P30 Pro eclipsed the size of the Mate 20 Pro, which itself is quite a handful. On a side note, if you can’t stand large phones the Huawei P30 may provide some relief, though you won’t get quite all the bells and whistles from the P30 Pro and the Mate 20 Pro.

The P30 Pro is a millimeter wider than the Mate 20 Pro, and you can actually feel it. I find the Mate 20 Pro to be easier to hold and handle. Its top and bottom edges are pleasingly tapered. The P30 Pro’s bottom is much flatter, so it doesn’t sit as comfortably in the hand.

The Mate 20 Pro feels nicer in the hand, but the P30 Pro arguably looks nicer

Both phones feature notches, but they couldn’t be more different. The Mate 20 Pro’s notch is wide and packed with sensors. The P30 Pro goes the minimalist route and it’s an improvement, in my opinion. Visually, the small “water drop” notch is less intrusive and it doesn’t mess with the status bar as much. All your icons are in their “usual” place, which is not the case with the Mate 20 Pro’s cramped status bar.

The P30 Pro and the Mate 20 Pro both look like Galaxy phones a bit, thanks to their curved display edges, but there’s no mistaking them for any other phone if you look at the large, flashy camera modules on their backs.

The Mate 20 Pro feels nicer in the hand, but the P30 Pro arguably looks nicer thanks to its stunning color options. The most striking is the fiery-orange Sunrise, but I also really liked the Aurora model (pictured). The darker Twilight colorway on the Mate 20 Pro is still beautiful, but maybe not as fresh looking.

One more note on usability: the power button and volume rocker are a little too close together on the Mate 20 Pro, resulting in accidental presses. Huawei has addressed this small problem on the P30 Pro.

The displays on the Huawei P30 Pro and Mate 20 Pro are about the same size, but the Mate features higher resolution. That’s according to the spec sheet; in real life, the Mate 20 Pro runs in Full HD+ by default in order to save battery life. That’s the same resolution as the P30 Pro, and you’ll have to look very closely to see a difference in sharpness between the two.

I did notice a difference in the two panels’ color balance. The Mate 20 Pro’s screen is ever so slightly warmer and more yellowish than the P30 Pro. You can tweak both phones’ displays to your liking from the display settings.

The in-display fingerprint sensor on the Mate 20 Pro is hit and miss. It works correctly about 70 percent of the time. On the P30 Pro, the sensor is placed lower on the screen, and it’s also slightly larger and faster. I found it to be more reliable, but it’s still not as solid as a standard reader. The Mate 20 Pro scores a point here thanks to its laser-based face unlock system. It’s faster and more reliable than the P30 Pro’s camera-based version. It’s also more secure – you can’t bypass it by showing it a photo of the owner, like you can with the P30 Pro.

You won’t see any real-life difference in performance when comparing the Huawei P30 Pro vs the Huawei Mate 20 Pro. That’s not surprising: both phones feature the same processor and memory, and very similar software. Modern high-end devices rarely have any performance issues to speak of, anyway.

In benchmarks, the P30 Pro pulls ahead of the Mate 20 Pro, possibly due to its new filesystem, which is supposed to accelerate app loading times and data transfer speeds. In Gary’s Speed Test G for instance, the Huawei Mate 20 Pro completed the course in 2m:01s, compared to the P30 Pro’s 1m:45s. In AnTuTu, the Mate 20 Pro hits around 280,000 points, compared to 290,000 for the P30 Pro. Respectable performances, though not something to write home about.

Battery life is excellent on both the Huawei P30 Pro and the Mate 20 Pro. With both, you’re getting 7 to 9 hours of screen-on time. In my experience, I had slightly better screen-on time on the P30 Pro, though you could chalk up the disparity to different usage patterns.

Battery life is excellent on both the Huawei P3o Pro and the Mate 20 Pro.

The two phones have identically-sized batteries and the same functionality. The highlight is, without doubt, the very fast charging. Using the bundled charger and cable, you can replenish the battery up to 70 percent in just 30 minutes. It’s truly impressive.

Both phones have reverse wireless charging, which can be useful for emergency situations or when you need to charge up small gadgets like wireless earbuds or smartwatches. It works with any Qi-enabled device, but it’s very slow. Don’t rely on it for anything critical.

The P30 Pro is the camera phone of 2019, but don’t dismiss the Mate 20 Pro too quickly. It has many of the same features, and image quality is quite good.

Both the P30 Pro and the Mate 20 Pro come with a 40MP (pixel-binned) standard camera, a 20MP ultra-wide camera, and an 8MP telephoto camera. While the basics are the same, the P30 Pro pulls ahead thanks to better optical zoom and superior low-light performance.

Where the Mate 20 Pro is capable of 3X optical zoom, the P30 Pro goes up to 5X optical zoom (and up to 10X lossless zoom). The ability to really bring the subject close affords you a lot of creative freedom — not only can you capture more detail, you can also frame the subject in ways that are just not possible without optical zoom. The deep zoom is made possible by the P30 Pro’s use of a periscope-style design that rotates light towards a set of lenses hidden inside the body of the phone.

The P30 Pro is also the better phone if you take a lot of pictures in very low light. The phone has a very light-sensitive RYYB sensor (compared to the conventional RGGB sensor on the Mate 20 Pro), larger aperture, and better optics. Thanks to these features, the P30 Pro can almost see in the dark. You can get similar results using the Mate 20 Pro’s Night Mode. However, the P30 Pro delivers better pictures and is easier to use, as you don’t need to switch to the dedicated Night Mode to get good results.

Another key difference between the two cameras is in Portrait Mode. The P30 Pro features a Time-of-Flight sensor on its back, which lets it measure the distance to objects in the scene. This results in a more natural, progressive bokeh effect compared to the Mate 20 Pro. This applies to the cameras on the back – there’s no Time-of-Flight sensor on the front.

With either phone, you get some extremely versatile cameras that give you more ways to express your creativity than most any other phone out there. If you’re a “regular” user, both will serve you just fine, but if you really want the best camera, the P30 Pro is clearly the first option.

Despite a change in version number from EMUI 9 to EMUI 9.1, the P30 Pro’s operating system is largely unchanged compared to the Mate 20 Pro. There are a couple of user-facing differences worth mentioning: the Always-on Display now shows notifications from third-party apps, not just calls and messages; and Google Assistant is now easier to access by pressing and holding the power button. Huawei also added a few integrations with third-party products on the P30 Pro, such as the ability to open and start your Audi with your phone (Audi sold separately).

Other than the small changes on the P30 Pro, EMUI is the same as always: feature-packed, customizable, and a bit unpolished.

The P30 Pro is the better phone all-around, by a small margin.

Value for the money

Unsurprisingly, the newer phone comes out on top in this comparison of the Huawei P30 Pro vs the Mate 20 Pro. That said, the Mate 20 Pro plays catch-up when the price tag comes into discussion.

At the time of publication, the P30 Pro is available on Amazon for 899 pounds (~$1170). The phone is still brand new, so we don’t expect this price to go down by much in the next couple of months.

Meanwhile, the Mate 20 Pro costs 715 pounds (~$930) on Amazon. That’s 185 pounds (~$240) lower, which is enough spare change to accessorize your Mate 20 Pro with several nice cases or maybe to buy a Huawei Watch GT or a pair of wireless earbuds.

The Huawei P30 Pro and Mate 20 Pro are premium flagship phones that are packed with the latest mobile technologies. They rival the best products from Apple, Google, and Samsung.

The P30 Pro is the better phone all-around by a small margin. Get it if you want the best smartphone camera, or simply want the latest and greatest in mobile technology. The Mate 20 Pro is a step behind when it comes to the camera, but it’s arguably a better deal thanks to its lower price. Your call.

And that’s a wrap! Which phone would you pick between Huawei P30 Pro vs Huawei Mate 20 Pro?