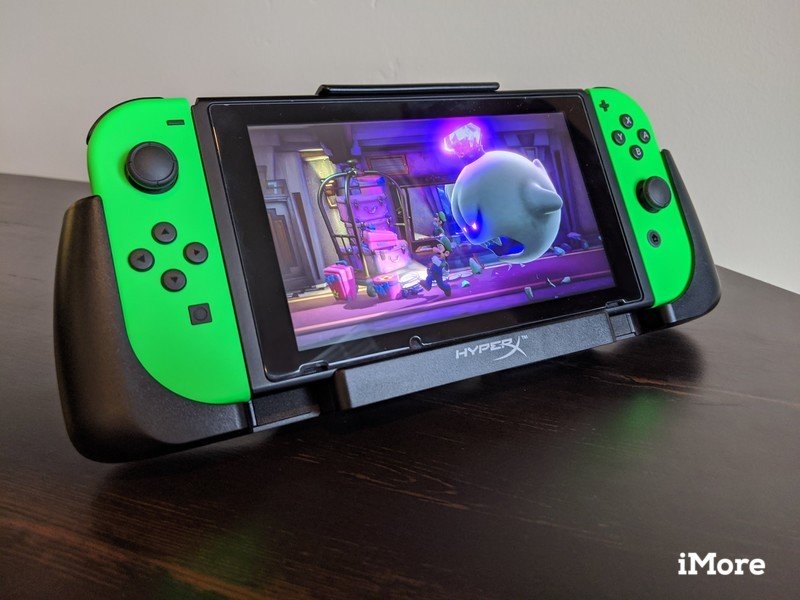 Give your Nintendo Switch some extra juice with this portable battery charger.

I take my Nintendo Switch with me just about everywhere; when I go to a doctor’s appointment, when I go on a trip, or when I’m going to hang out with my friends. It’s an amazing handheld that provides me with hours of entertainment. The only problem is that eventually that battery runs out of juice leaving me no choice but to turn the Switch off until I can get it home to its Dock.

Fortunately, there are plenty of ways to extend your Switch’s battery life. One such way is with HyperX’s new ChargePlay Clutch battery charging case. I tested this accessory for 16 hours to see how well it worked with the Switch. While it isn’t perfect, it can help you add several hours of extra battery life to your console.

Bottom line: It’s a bit expensive and it makes your Switch bulkier, but it provides extra battery life and much better grip than the console has on its own. It’s a great purchase for any Switch owner. 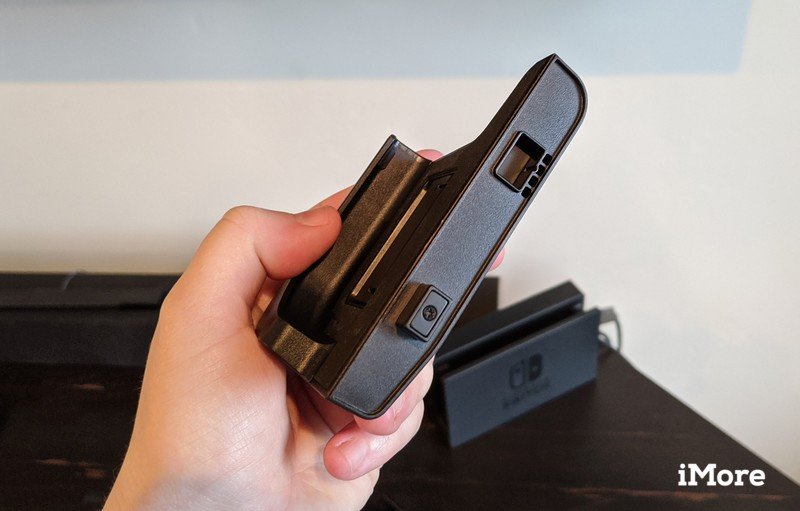 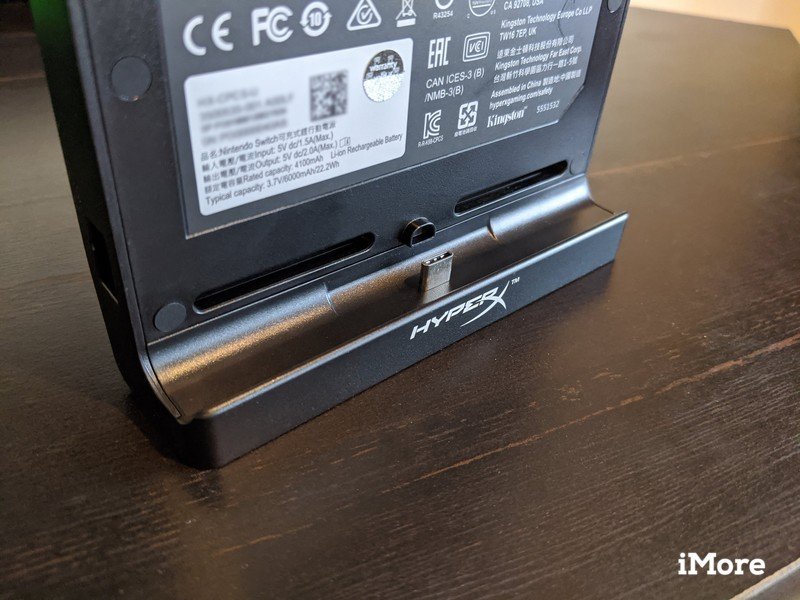 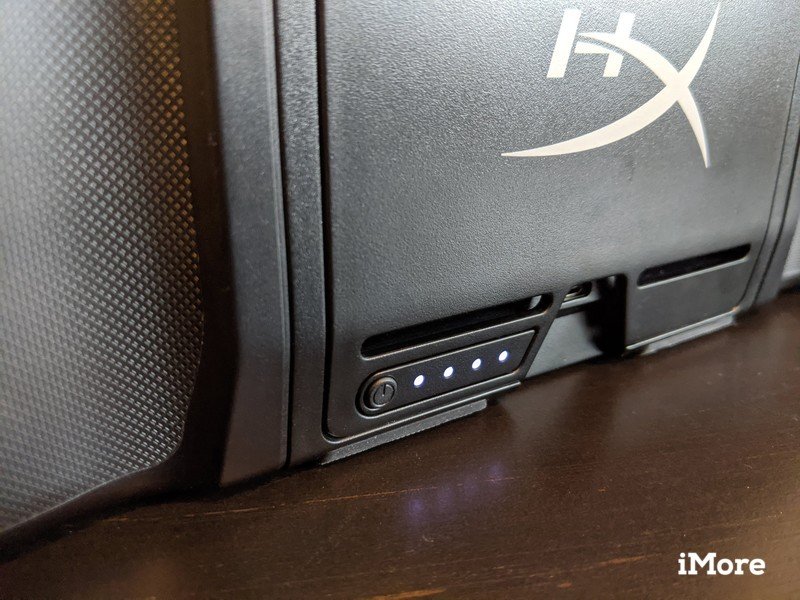 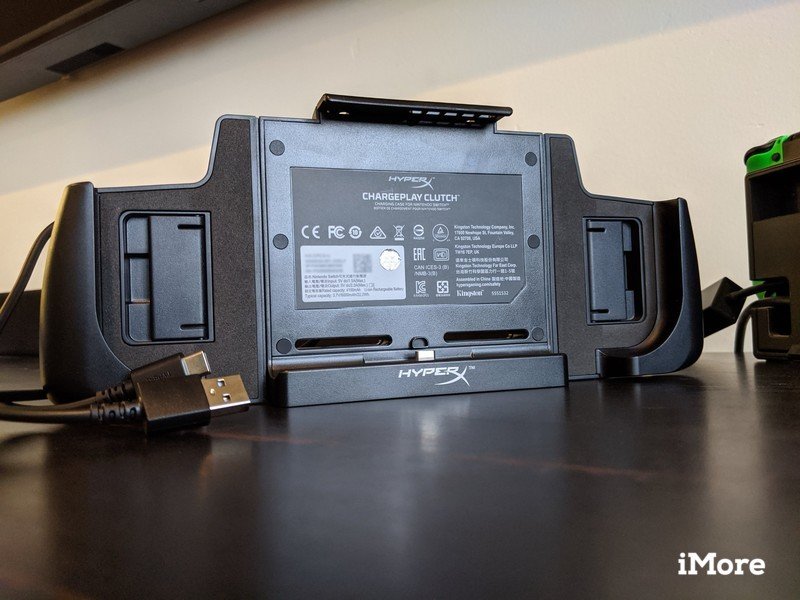 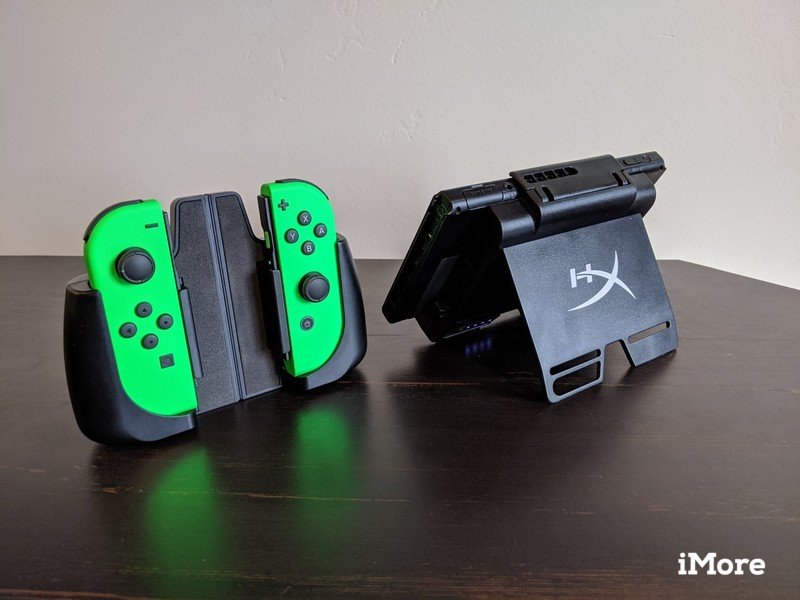 Whether you have the original Nintendo Switch, or the Switch V2 with up to 50% more battery life, at some point you’ll find yourself out of power when you don’t want to be. It’s in these moments that you’ll be happy to have a battery charger case like this one.

The thing I wanted to know most when I pulled this accessory out of the box was how many extra hours of game play it would give me. To figure that out, I played my Switch until it ran low on power and then plugged it into the ChargePlay Clutch and kept playing. I was able to get about five additional hours of gameplay while using this accessory. That might not be as much as what you might be able to get with a reliable powerbank, but it definitely allows you to get further in your adventures while being easier to tote around with the Switch.

I was able to get about five additional hours of game play with this accessory.

Depending on the game you’re playing and your brightness settings, the original Switch only lasts between 2.5 to 6 hours while the new Switch can last between 4.5 to 9 hours. That being the case, adding five more hours to your playtime is a considerable percentage increase for either Switch version. Something to note here is that there is no battery inside the detachable grips, so they won’t charge your Joy-Cons when separated from the main charger. However, while still attached to the console, the Joy-Cons will receive power from the ChargePlay Clutch. 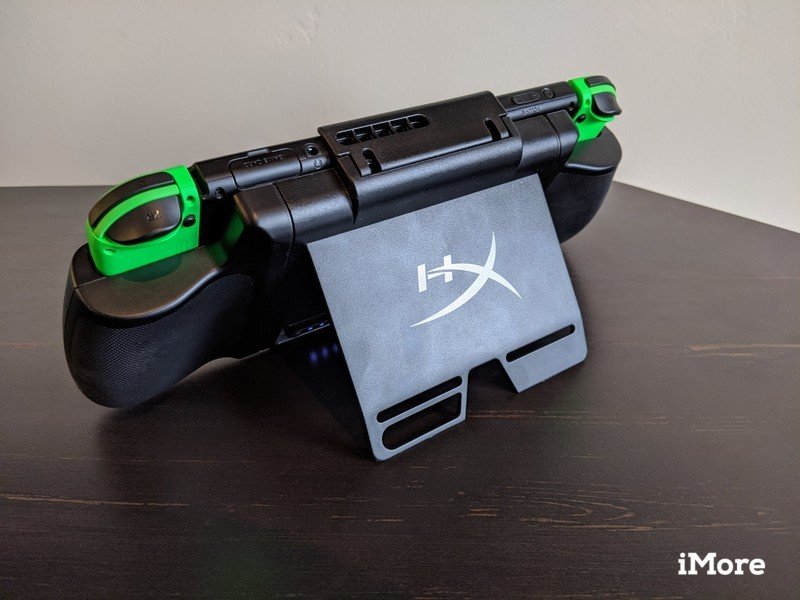 I measured the included USB to USB-C cable at 5 feet eight inches, which will give you plenty of room for charging up the battery case when it runs out of juice. I especially love that the USB-C port is on the backside of the ChargePlay Clutch, that way it doesn’t get in the way of your hands if you want to hold the battery charger enveloped Switch while it charges.

Additionally, I love the way the kickstand is designed. It offers more support than the Switch’s flimsy stand and has a gap in the middle, so you can easily charge the ChargePlay Clutch even if it’s in tabletop mode. There are two rubber feet on the bottom of the accessory to keep it from sliding while the kickstand is extended. What really satisfies the OCD part of me is that when the kickstand is put away, it lies flush with the rest of the backing.

To insert your Switch into the case, you lift the latch on top of the accessory, which opens and closes via hinge. Then slide your case into the ChargePlay Clutch until it plugs into the USB-C port and clamp that latch closed again. This makes it so your Switch is securely situated within the casing. You don’t have to worry about the Switch overheating as the latch’s vents allow heat to escape the console. All in all, it’s a beautifully designed battery case.

The grips Removable and great texture 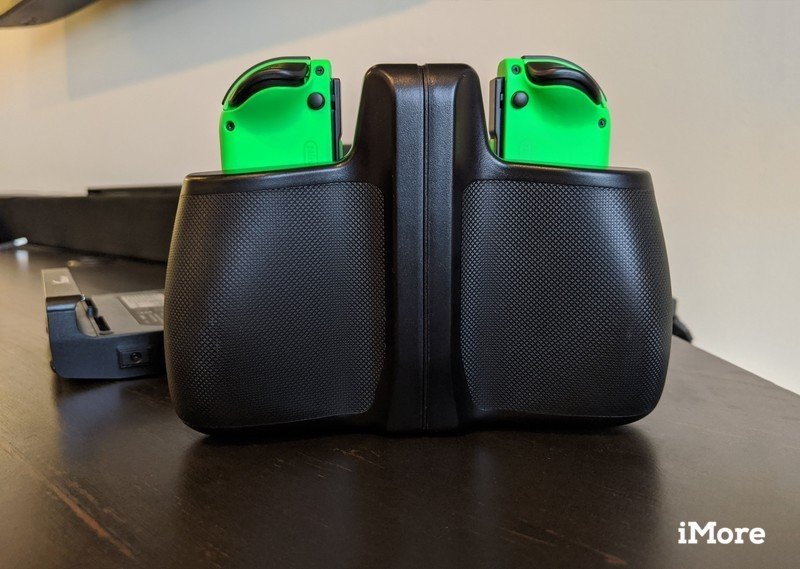 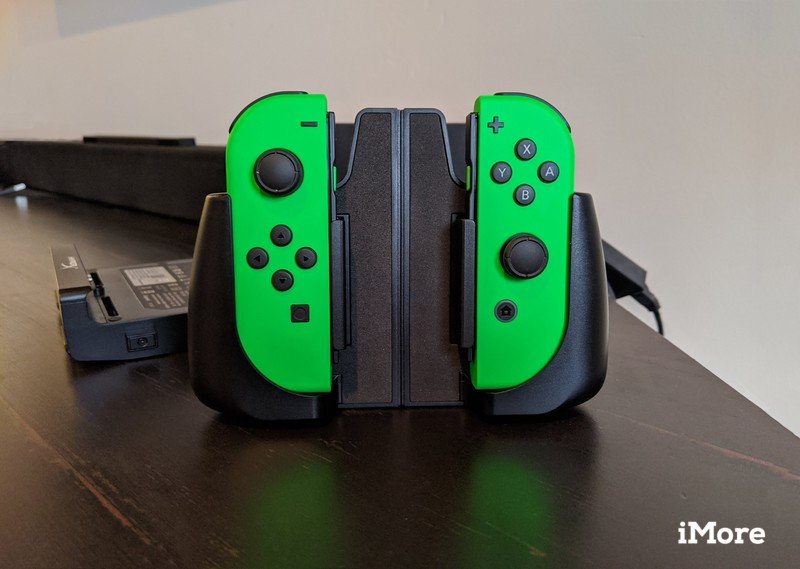 Something I love about this charging case is that the included Joy-Con grips can detach from the main cradle and connect to each other. That way you can use them like a controller while your Switch is in the Dock or in tabletop mode. It took me a minute to figure out how to detach them.

Strong magnets allow the grips to connect to the main charger and each other.

There are magnets on the sides of these grips that allow them to connect to the main charger and to each other. You simply pull them apart when you want them to separate. And you don’t have to worry about them falling off on their own; the magnets are very strong and only detach when you pull hard enough. Now, I was surprised to discover that such a strong magnet was being used on this accessory given that magnets and important tech usually aren’t a good mix. However, I know that HyperX is a reputable company and that it probably used magnets and a design that wouldn’t harm my expensive Switch’s hardware.

However, just to be safe I contacted HyperX customer service and asked the representative if there were risks to using this accessory with my Switch. I was told, “All factors and angles have been taking [sic] into consideration [with the] design and we would not release an item that will effect any product you use with it.” So, if used correctly, the magnets in this accessory shouldn’t cause any issues with your console. 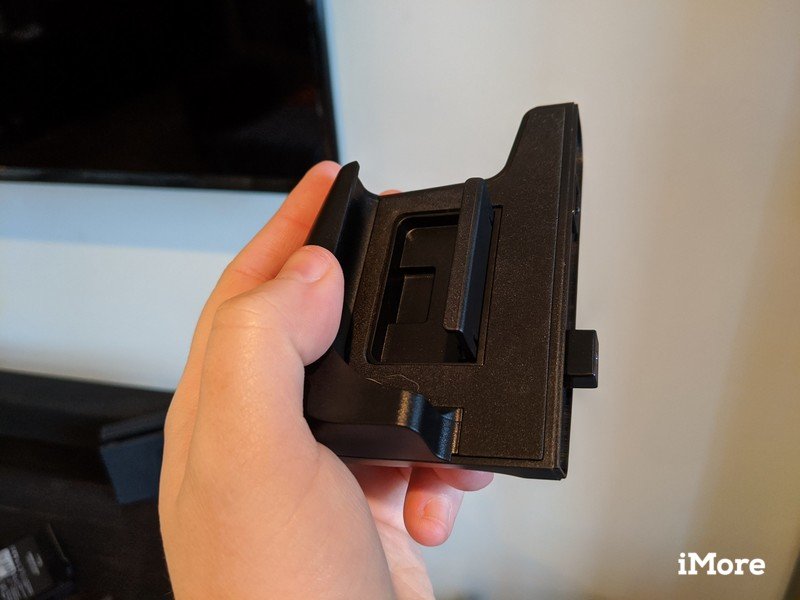 If you look on the front side of the grips you’ll see a hinged flap in the center of either side. These stay flat if you’re playing the Switch in handheld mode, but if you want to use the Joy-Cons while detached from the console, you flip those hinges up, and they act as rails to keep your Joy-Cons in place. It looks a little flimsy, but is actually surprisingly sturdy.

I love the textured backing as it adds more friction to the grips and feels more secure in my grasp. People with larger hands will especially appreciate these grips as they are pretty large and ergonomic making it a lot more comfortable to hold the slim Joy-Cons in your hands. But because of this, the grips might be too large for smaller children or people with little hands to comfortably hold. Fortunately, they’re an optional part of the ChargePlay Clutch, so you can play without the grips if you don’t like how they feel. 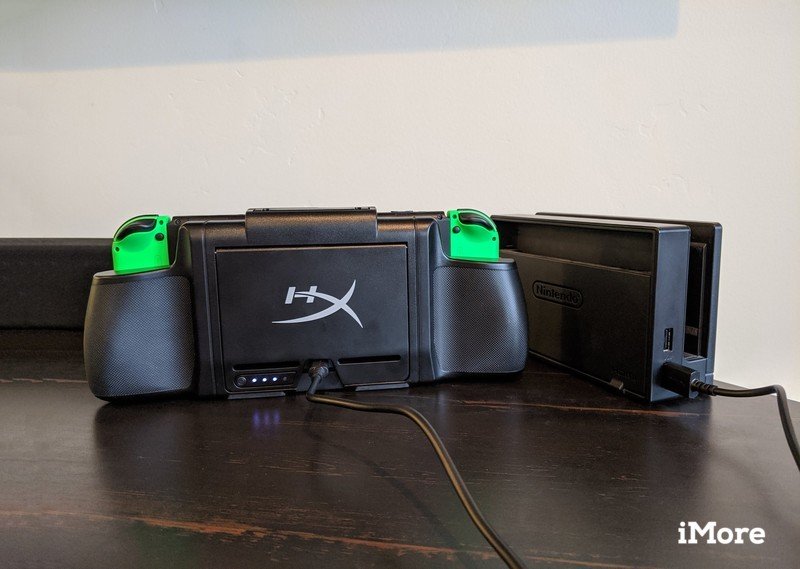 HyperX’s ChargePlay Clutch is a beautifully designed accessory that can help improve your gaming experience. But, like most things, it isn’t perfect. Here are some of the things I don’t like about it.

It more than doubles the weight of the Switch.

On its own, the Nintendo Switch weighs roughly 10.8 ounces and the ChargePlay Clutch weighs about 14.1 ounces. That means that adding the battery case to the Switch more than doubles the weight of the gaming system. That being the case, I think the magnificent textured grips make up for this by making the Switch and charger case easier to hold. Plus, if there’s a flat surface nearby, you can use the included kickstand if you need to give your hands a break.

While I love the backside of the grips, I don’t like how close they get to the buttons on the front side. It isn’t terrible, but I don’t particularly like feeling the ChargePlay Clutch’s plastic coming over the Joy-Cons when I try to extend my thumb over the left Joy-Con’s left D-pad button or the right Joy-Con’s A button.

Not Switch Lite friendly Not designed for the smaller Switch 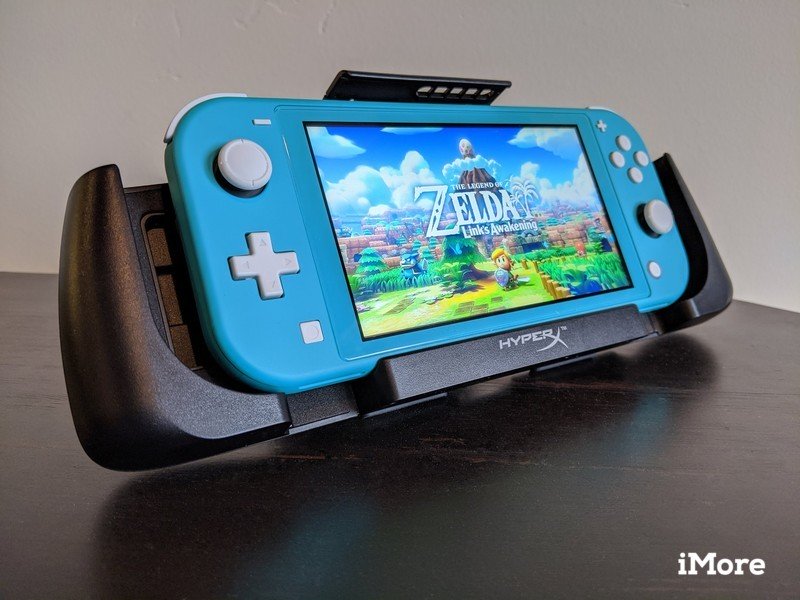 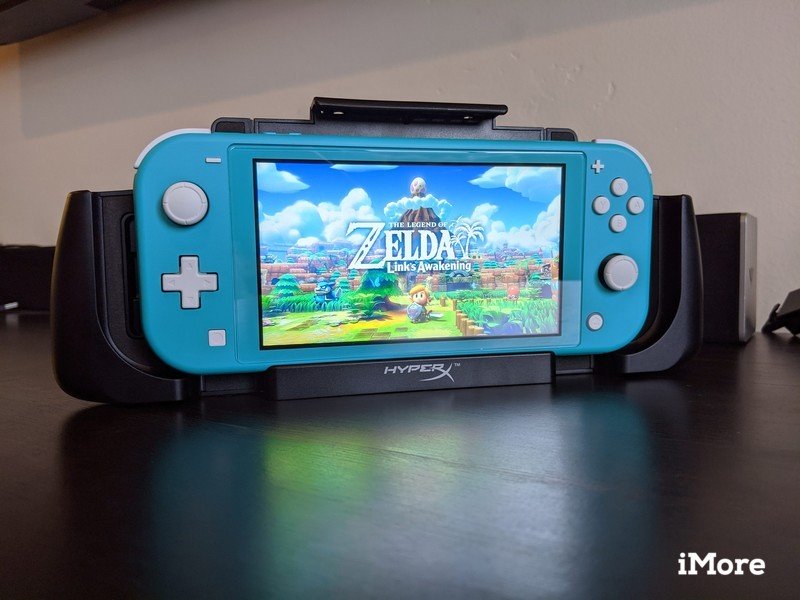 If you’re wanting something like this for the Switch Lite, you’re out of luck. HyperX doesn’t have a Switch Lite version of this accessory. Now, I did place my own Turquoise Switch Lite into the ChargePlay Clutch and it did charge alright. But, I advise against people doing this.

For one thing, since it’s smaller than the original Switch, it doesn’t get held securely in place. One wrong move and your expensive gaming system could fall out of the accessory and go tumbling to the floor. Additionally, this fit puts more stress on the ChargePlay Clutch’s USB-C, which means it could get damaged or worse, potentially even break off and get stuck in your Switch Lite. It’s really just not worth the risk. If, HyperX creates a Switch Lite version, we’ll be sure to report on it.

This next thing isn’t a huge problem, but it is something to be aware of. The Joy-Cons slip into the grips vertically while the grips pull away from the ChargePlay Clutch horizontally. Additionally, the Joy-Cons attach to the grips differently depending on if you’re playing in handheld mode or tabletop mode, which makes switching from one mode to the other less convenient than it could be.

The grips and Joy-Cons cannot be removed together from the Switch and battery case.

For instance, when going from handheld mode to tabletop mode you’ll need to follow these steps: 1. Slide the Joy-Cons out of both the Switch and the grips. 2. Pull the grips away from the ChargePlay Clutch. 3. Flip up the hinged rails on either grip. 4. Slide the Joy-Cons back into the detached grips. It would have been nicer if you could just remove the grips and the Joy-Cons from the Switch together. However, while this is less convenient it really doesn’t take that much time to swap everything around. 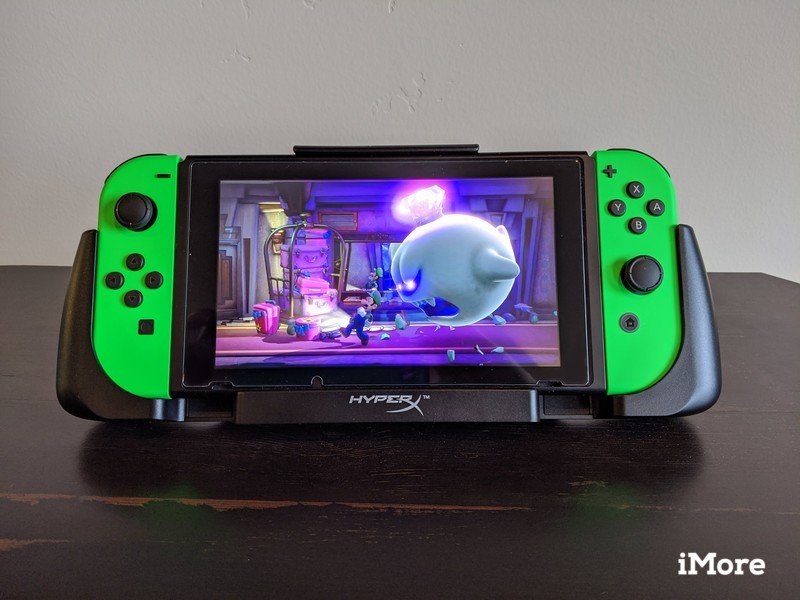 As with any attachable battery, the HyperX ChargePlay Clutch makes the Switch noticeably heavier to hold and it’s a bit expensive. However, the detachable grips make it a lot easier for those of us with larger hands to hold the Joy-Cons more comfortably and the five hours of extra battery life really lets you get further in your games before the battery runs out of juice.

This accessory’s versatility matches the Switch like no other charger case I’ve seen. It’s a great buy for anyone who’s ever found themselves running low on battery at the worst possible time and feels great in your hands. I definitely recommend it as a must-have accessory for anyone who plays their Switch on the go.

In addition to allowing you to play your games longer, this accessory makes the Switch more comfortable to hold. The grips can detach to be used separately and there’s a sturdy kickstand for tabletop mode.